Consider the source when supplementing lysine

Most dairy nutritionists report that they balance the amino acid levels in their dairy rations to bolster income over feed cost (IOFC). Typically, this includes the use of supplemental methionine and lysine, the first two limiting amino acids. They are limiting because, when in short supply, they can limit herd performance. Supplementation is required as they do not naturally occur in high enough levels in feedstuffs to meet dairy cow needs.

Feeding blood meal is an age-old practice that may deliver excessive and wasted nutrients. Blood meal is closely associated with inconsistencies in digestibility (i.e., the lysine it contains may not be readily available).

In addition, the overfeeding of other amino acids can have negative consequences. Blood meal requires more ration space than today’s rumen-protected lysine products. Palatability can be another consideration.

The practice of balancing the amino acid levels in the diet has been gaining recognition and use among producers for many years. On the income side, herds often realize increases in milk yield, milk protein and butterfat. On the cost side, crude protein levels can be reduced as much as 3 percent. This nicely reduces the investment in protein and makes space for other ration feedstuffs.

A stream of articles has been reporting and continues to report on the insights gained from industry and university professionals when balancing amino acids and using rumen-protected methionine and rumen-protected lysine. Making an optimal level of amino acids available to the cow is sound nutrition.

Nutritionists in the swine and poultry industries pioneered amino acid balancing and have been realizing the resulting production gains for decades. The better delivery of protein building blocks makes for more efficient protein synthesis.

The herd benefits. Protein is one of the most important nutrients in dairy cow diets. It is integral to immune system regulation as well as growth, reproduction, milk yield and milk component production.

Blood meal is high in lysine, but there is more to the story. Blood meal may actually reduce herd potential, according to insights researchers have gained over time.

Blood meals go through a drying process before being used in diets. The process can, and often does, damage the available nutrients, including lysine. This introduces inconsistencies to the blood meal’s nutritional profile.

Little variation among biological sources is expected. The proportion of blood proteins is consistent within a species, and only small differences occur between swine and cattle. The range makes it especially difficult to consistently balance rations for amino acids using blood meal.

Blood meal also presents other feeding issues. Supplementing with blood meal can result in the overfeeding of amino acids. The cow must then use energy to convert the unneeded amino acids into ammonia for excretion as urea, an environmental concern.

Blood meal also limits diet space. High-producing dairy cows are naturally limited on lysine due to rumen-fill issues that restrict intake. Feeding blood meal requires a significant amount of diet space. An example of this is shown in Table 2. To reach the needed amount of additional lysine from metabolizable protein (MP-Lys), it would take significantly more blood meal regardless of the research value used.

Supplementing with a consistent lysine source is an attractive option for increasing IOFC as the ration’s amino acid levels can be more precisely balanced. In addition, high-producing herds are achieving higher milk component concentrations, improved health and breeding. Amino acid balancing is increasingly a management tool for realizing the herd’s genetic potential.

Typically, the use of rumen-protected lysine products increases the space in the ration for other feedstuffs. Many nutritionists will take this opportunity to feed more high-quality forage. 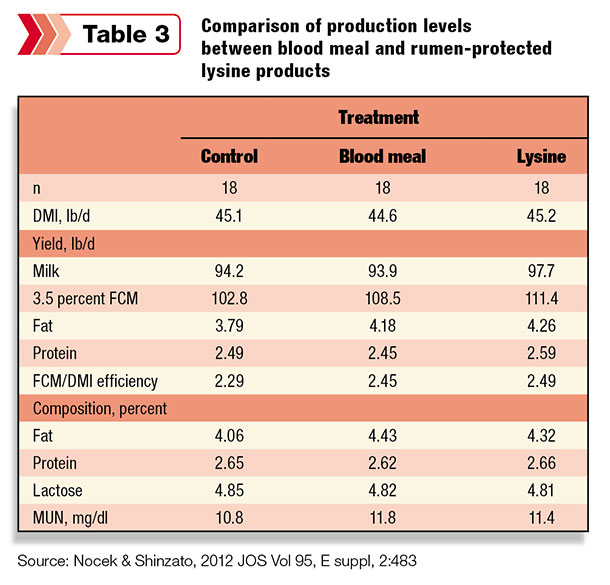 In a recent research trial comparing blood meal to a commercial lysine product, a significant difference existed in performance. When multiparous cows were tested between weeks 4 and 7 of lactation for milk yield, butterfat and milk protein, those receiving a rumen-protected lysine product performed significantly better than those receiving blood meal.

A comparison of blood plasma samples showed that the blood lysine level increased among cows receiving blood meal. This indicates that the blood meal did deliver a significant amount of lysine; however, many other amino acid levels also increased, which likely diminished the effects of the lysine being supplied. 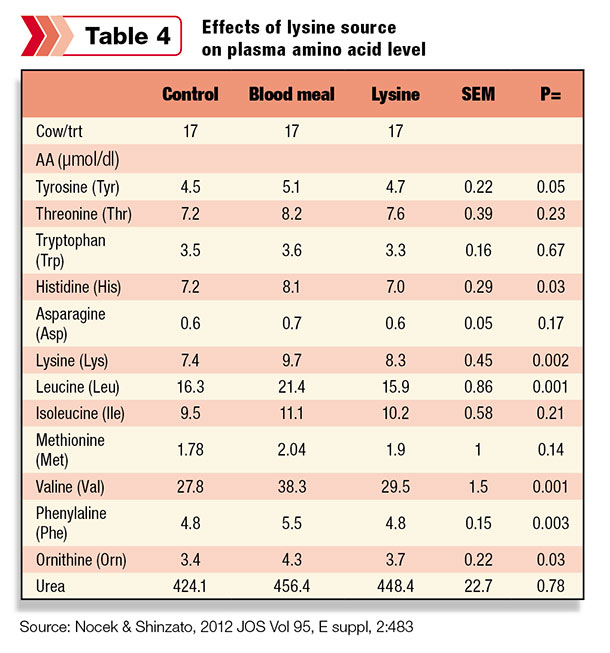 Choices exist when formulating rations to bolster IOFC. Considerations include the proper use of amino acid balancing and which supplemental methionine and lysine sources to use. With the supplemental lysine, knowing the source matters. PD

Jessica Tekippe is the AjiPro-L rumen-protected lysine product manager for Ajinomoto Heartland Inc. She can be contacted by email.