Doug and Tom Block have learned many lessons while managing their family operation, Hunter Haven Farms near Pearl City, Illinois. Doug shared what makes their farm successful at the 4-State Dairy Nutrition and Management Conference held earlier this year in Dubuque, Iowa.

“Concentrating on getting good-quality feed is the key to everything we do, really,” he said.

In addition to feed quality, feed efficiency is another area the Blocks focus on.

Block said there are four main ways they have found to improve feed efficiency. The first is to eliminate “procedural drift.” That is, to “make sure things are being done the way we think they should be done all of the time.”

At Hunter Haven, there are 13 full-time milkers and one part-time. They milk three times a day, at 8 a.m., 4 p.m. and midnight, with each shift having two milkers and one person to move the cows. They said they like to hire full-time employees because they tend to have a greater understanding of their job expectations.

They have a full-time herd manager, a primary feeder/feed mixer and an assistant herd manager, all of whom are cross-trained to do one another’s jobs. There is also a parlor manager/calf feeder, a hoof trimmer/calf feeder and a feeder/helper position.

Doug is the supervisor of the dairy operation, and Tom supervises the fields and crops.

Retaining employees is generally not a problem because they not only pay a fair wage, Block said, but more importantly they treat their employees in a fair-minded manner with explained expectations. “Standard operating procedures and training help with this,” he noted.

The second way they increased feed efficiency at Hunter Haven is to increase the quality of the feed, with an emphasis on the quantity of digestible nutrients.

They have been able to improve the quality and quantity of the forage they get into their bunkers. They started using inoculant about 10 years ago. “We think we get less dry matter loss and increased palatability.” 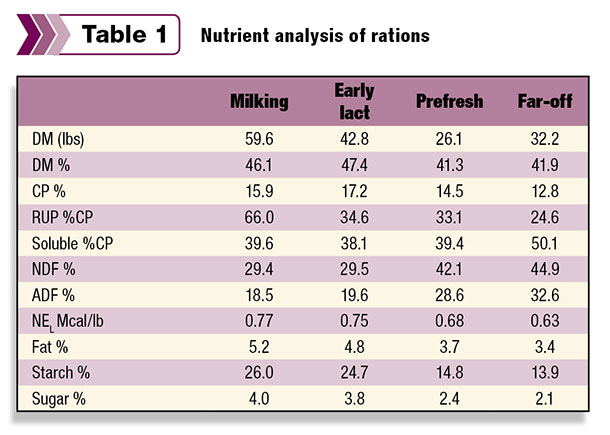 To prevent spoilage, they not only run the plastic down the sides of their bunker, they have about 3 feet of plastic that tucks in underneath the silage.

“It took us a long time to figure out the importance of our agronomist,” Block said, noting that it is also essential for their agronomist and nutritionist to work together.

Having the Block brothers, their nutritionist and agronomist all planning together is a “work in progress.”

Block said, “Our goal short term is to try to set the agenda for a joint meeting. Right now, we are trying to explain the problem areas that we need to work together on solving.”

The third way to increase feed efficiency is to monitor dry matter intake while monitoring the components of your milk. “One of the best things we did was getting a digital feed scale,” Block said. “You can’t manage what you can’t measure.”

The Blocks said using a scale has had a positive impact on cow health, production and components. With it, they are able to have a uniform ration that matches their desired formulation.

Cows are more comfortable, which relates directly to milk production. We noticed an immediate increase of 3 pounds of milk when we switched from sawdust on mattresses to using compost bedding from a methane digester.”

The Blocks are in the process of switching to tunnel ventilation in one of their barns, which is wider and with lower sidewalls. “The tunnel vent system has dramatically increased the airflow and comfort factor for the cows.

We feel in this barn that it will be a huge benefit over our conventional curtain system, which depended a lot on natural air flow. More comfort for cows, again, equals more consistent milk production.

“We had to make changes to keep the temperature down in our holding pen. It was definitely an Achilles’ heel for us,” he said. The Blocks added larger sidewall fans to pull air through the holding area, which resulted in a lot more airflow. They also changed the sprinkler from a mister to a soaker with a timer system that adjusts for temperature.

They also coordinated that with sidewall curtains on thermostats on the opposite wall. “We are really trying to keep cow body core temperature down on extremely hot days. It has helped with more continuous milk production and better reproduction results during hot summer weather,” he reported.

Block said if they could go back and do things differently, they would have created more feed storage sooner, concentrated more on hoof health and cow comfort earlier, and they would have not fallen behind on their breeding program.

“Cows need to be able to move comfortably to be in their best health,” he said about hoof health.

Block says they fell behind on the breeding program during their construction project and expansion became a greater priority than getting cows bred. “Breeding cows became the last thing we would do every day,” Block recalled. “Our solution was hiring a breeding service to help us get cows bred on time, along with an improved reproductive program with our veterinarian.”

Block explained that they also use 10 different groups for their cows. The groupings include cows in first lactation, cows in first and second lactation (larger first-lactation cows and smaller second-lactation cows), small mature cows, large mature cows, post-fresh (up to four weeks), dry cows, pre-fresh cows, pre-fresh heifers, do not breed/mastitis/cows to be sold and milk not for sale (treated and just fresh). Their pen sizes are related to the size of the holding pen and barn size.

Kelli Boylen is a freelancer writer in Waterville, Iowa.

PHOTO
Doug (pictured) and Tom Block started farming with their father after they completed college in the early 1970s and took over the farm when he retired. Their family has farmed at this location for more than 60 years. Photo courtesy of Doug Block.