These systems share a common theme in that the payment is calculated based on the wholesale price of products produced from milk.

In 1937, California was able to convince the courts their milk supply and usage were not interstate commerce. California was therefore excluded from the Federal Milk Marketing Orders and was allowed to manage their own payment system. Today, California would have difficulty proving their milk is intrastate, but the system still stands. However, there is serious effort under way to bring California producers back into the federal order system.

More recently, other events have reduced the federal government control of pricing. In May 2004, the Western Federal Milk Marketing Order was disbanded. In this area, milk can be priced by any method agreeable between the producer and the processor. In reality, many of the payment systems are similar to the federal milk order system that existed previously.

Another shifting pattern that can be significant is de-pooling. In some years as much as 20 percent of the milk in the Upper Midwest is “de-pooled,” or removed from the federal order pricing requirements. De-pooling takes place when Class III milk for cheese is priced higher than the weighted value of the other three classes of milk.

Cheese per-capita consumption has increased 300 percent since 1970. Improved transportation and the dominance of processed milk products that contain less water have reduced geographical barriers, and the U.S. dairy industry is now in transition to be an international business.

These consumption changes have also changed the nature and geographical landscape of milk production. For instance, Florida, which is a fluid milk market, shrinks every year – while Wisconsin, where more than 80 percent of the milk is used for cheese, continues to grow.

The chart above shows geographically where milk is controlled by which system. The six orders paid on components are the Pacific Northwest, the Upper Midwest, the Central, the Southwest, the Mideast and the Northeast. The orders paid on hundredweights of skimmed milk and milkfat (the “advanced” system) are Florida, Southeast, Appalachian and Arizona – Las Vegas. California is the only state that has their own system. 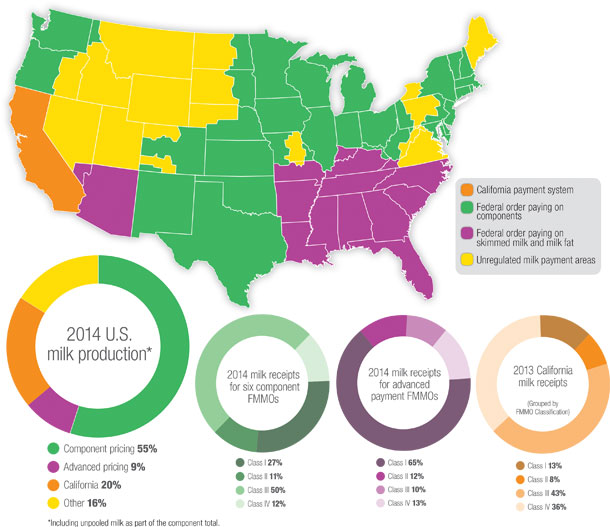 Click here or on the image above to open in a new window at a larger size. (PDF, 3MB)

The water content of milk has no value in this system. Prices for these are determined by formula at the end of the month. Class III milk for cheese is the largest milk category in these orders, and the payment system is designed to create the right incentives for milk appropriate for cheese manufacturing.

Milk usage in the large component payment system is shown below. Class III (milk for cheese) is the dominant class and growing. Class I (milk for fluid milk products) continues to decline.

The fluid milk category is declining, and so is the dairy business in these orders. The payment system is designed to support the primary end products: fluid milk. The slice designated as Class IV (used for nonfat dry milk) is almost totally from the Arizona – Las Vegas order.

California has the advantage of being on the coast and enjoys a very healthy dairy export business. Nonfat dry milk has seen considerable growth in the last decade as exports were expanded. Their system is primarily a component payment system based on milkfat and all other solids. In other words, this system pays the same for lactose as it does for milk protein.

Therefore, the largest cheese producers pay a separate premium incentive for milk protein they need for making cheese. Nonfat dry milk has grown to be a significant usage of California-produced milk, and the majority of this is exported. The chart below shows California 2013 data, as the 2014 data is not yet fully available.

In forthcoming issues, the formulas used in these payment systems and some of the differences within the orders, will be reviewed. The concept for the payment formulas is pretty standard in all the systems.

For example, the price of milkfat is determined by the wholesale price of butter less the cost to churn the milkfat into butter. However, some idiosyncrasies, such as the payment for a lower somatic cell count used in just four of the six component orders, adds complicating detail. PD