Half of readers know of or have used ear notching

More than half of Progressive Dairyman readers acknowledge some understanding about ear notching and its potential uses for youngstock on dairy farms. That’s according to recent online and phone surveys conducted by this magazine.

Beginning in March, we asked readers: “Do you ear notch calves on your dairy farm?” More than 500 responses were collected in an online poll and over the phone from March through May. Over the phone, readers could specify the primary reasons why they were using the practice or had used it in the past. 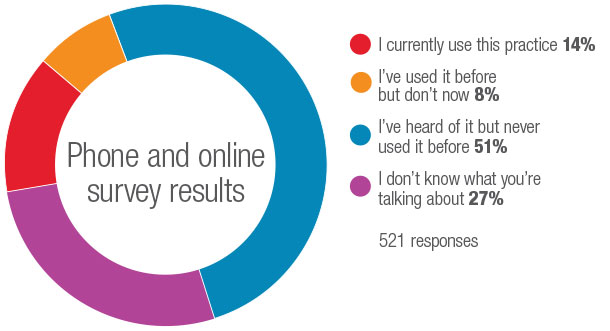 Twenty-seven percent of readers said they had no knowledge of or experience with the practice.

In short, an ear notch can be used to positively test an animal for BVD or brucellosis. It can also be used to DNA test for parentage. Also, some states recognize the shape of an ear notch as a form of cattle source identification, similar to that of a cattle brand. 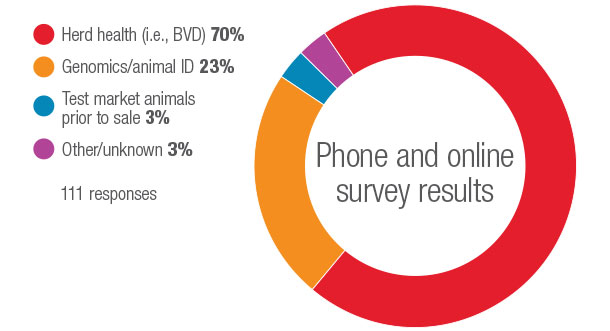 The most common diseases readers were screening for were BVD, followed by brucellosis.

“This shows nearly a quarter of producers have reasonably looked over this practice and are buying into a biosecurity program. They have to buy into the value of such a program, including the cost for testing and time,” Evermann says. “They are looking for a needle in a haystack when it comes to BVD."

"But producers need to recognize that for every persistently infected BVD heifer in their herd, they have 15 other animals that are collateral damage. Those animals become immune-suppressed and are more prone to other infectious diseases, such as mastitis, foot lesions, poor production.”

Evermann says some producers may not yet realize research shows BVD is an immune-suppressive disease and that persistently infected animals with BVD are “shedders” that impact other animals in the herd. That’s important because it means having even one in a herd could impact other herd health prevention measures.

“Some vaccines may not take effectively if producers have an underlying BVD infection causing immune suppression,” Evermann says.

“Part of the reason more don’t do BVD testing is that it’s not the highest issue on their priority list,” says Michael Coe, one of the co-authors of the recently published articles and vice president of animal health for Animal Profiling International.

“Producers have reproduction, employees and mastitis to deal with, so usually a negative event like poor reproduction, increased respiratory disease or report of a BVD-PI calf brings it to their attention.”

Despite the other available methods for testing for BVD-PI animals, ear notches are the most commonly submitted medium for BVD testing. Todd Byrem, director of Antel Biosystems, a BVD testing provider, says about 85 percent of all BVD tests submitted are ear notches. Blood and milk samples can also be used for a BVD test.

Coe sees similar trends indicating ear notch use as the preferred method of testing. Dairy producers and calf raisers who collect blood to monitor serum protein are the most likely to submit a blood sample BVD test, Coe says. That testing for failure of passive transfer improves the likelihood his clients would also use blood testing to screen for BVD.

“They don’t want it in their calves and infecting their animals,” Coe says. “When they find a positive calf, they tell the dairy they need to go check the cow. Dairies themselves aren’t necessarily testing a whole bunch, but they are exposed to it because their replacement raiser is doing it.”

Evermann believes some dairies may not know that blood testing can just as accurately screen for BVD as ear notching.

“Ear notching may stigmatize an animal,” he says. “Dairy clients may prefer to use blood serum testing because it doesn’t mark the animal up.”

If a youngstock handler is drawing blood, Evermann recommends a “biosecurity screen” that would include testing for BVD, Johne’s disease and bovine leukosis. All three tests can be performed with the same blood sample.

Experts suggest testing individual cows’ milk or bulk tank samples for BVD is more of a whole-herd surveillance protocol than a control program.

“When we advise clients who are going to start a control program, we suggest they look at the calves first and do some ear notches,” Byrem says. “If you do find one in a calf, then you could quickly survey cows by looking at milk samples.” PD