It is reasonable to assume that golfers who have hit a hole-in-one have spent a great deal of time hitting balls at the golf course. They have developed a consistent swing after years of practice. The same principle applies to risk management.

Those who have a consistent strategy in place have a greater likelihood of maintaining long-term profitability by hedging. Even the most dominant golfers will hit bad shots, and sometimes an inconsistent player will hit good shots. However, at the end of the round, the more proficient player will almost always have the better score.

How does one lower his handicap in dairy price risk management? A common saying among golfers is that “Golf is 90 percent mental.” The same is also true in risk management.

There is an old Wall Street expression: “Financial markets are driven by two powerful emotions – greed and fear.” While this seems like an oversimplified statement, it is visible in every economic boom-and-bust cycle. Naturally, investors have an emotional attachment to their portfolio, and when the degree of emotional attachment is higher, the potential for financial mistakes to occur increases.

As author and certified financial planner Carl Richards says, “Feelings are expensive.” In the case of dairy farming, the investors (dairy farmers) have a very strong emotional attachment to their investments. Growing up on a dairy farm, I understand firsthand the nostalgic value the land, cows and equipment hold in the minds of their owners.

Over the last decade, the volatility of milk prices has caused dairy producers to go through extreme cycles of greed and fear. The number one contributing factor to the cycle is the bias put in our heads by recent events.

When the most recent milk price you have received is relatively higher than what the futures market is showing six months from now, you naturally become greedy and expect the price of milk to rise in the coming months. Conversely, when the last milk price you received is significantly lower, producers become fearful and look to the futures market, but more often than not, futures have fallen to an unprofitable level.

Let’s walk through a cycle of greed and fear with “Joe Producer”:

Owning a business is rewarding but risky. Capitalism itself is based upon principles that reward those who take risks, though in order for a business to prosper in the long run, those risks must be managed with discipline. Many producers accept volatility and manage risk by cutting costs when necessary. This may be a simple solution, but it does nothing to lessen the major cash-flow swings caused by the markets.

Theoretically, when you do not hedge your milk, you are betting the milk price will constantly increase. Unsurprisingly, it does not. Since 2000, the average announced Class III milk price after adjusting for inflation was approximately $16.81 per cwt.

However, the standard deviation from that average is about $3.38 per cwt. This means that only 68 percent of monthly settlements fell between $13.43 per cwt and $20.19 per cwt in today’s dollars. This is an extremely wide range of prices to accept for the commodity you sell and a major motivation to proactively manage cash flows.

When the markets move in an unfavorable direction and cash margins become tighter for dairy producers, the dairy industry as a whole begins to feel the economic ripple effect. Markets for supplementary commodities, goods and services in the industry begin to see a decrease in demand as producers cut costs.

The decrease in demand causes the prices for these things to decline. The point I am getting at here is: Consistently hedged producers who have more stable cash flows will also have greater purchasing power when cash margins become tighter.

As an example, let’s take a look at replacement cow prices. The national average price for replacement milk cows tends to have a direct correlation with milk prices, with a slight lag. Figure 1 shows the relationship fairly clearly. 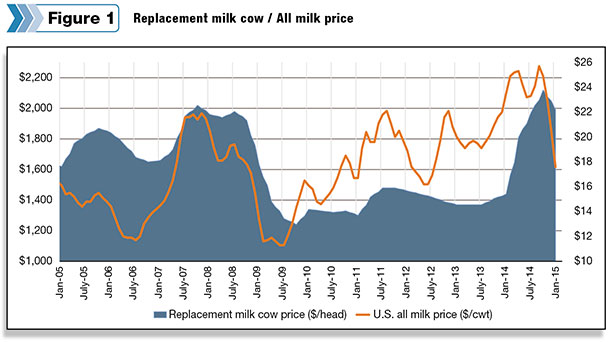 From 2009 until late 2013, the price of replacement milk cows remained relatively low, but many dairy producers were in such financial despair from 2009 that the thought of expanding their herds seemed unfeasible.

Replacement milk cows, tractors, land … the list goes on and on for the things that become less expensive when the industry goes into a repression. With a disciplined risk management strategy, the question you will be asking yourself is not, “Will I survive the next down cycle?” but rather, “What will I buy when that happens?” PD