When does technology help productivity? It’s about the data

I just saw an episode of the popular Today Show on NBC that introduced viewers to some eight new cool devices to “upgrade your kitchen” and conceivably (somehow) “improve your life and make you more productive.”

Three of the devices – an electronic bacteria sniffer that could tell if poultry had gone bad, a sensitive skillet/hotplate and an automated bar that would mix various beverages – had their operation linked to an iPhone. Cool? Perhaps to some. But would they make me more “productive” and able to do more things in less time or at a lower cost?

The problem is: Productivity is really a simple mathematical analysis – outputs minus inputs divided by time. Doing more or making more with less, having higher yields or more time are all simple indicators of productivity. If the hundredweights for milkings are going up, the cows are producing more milk.

According to the USDA, it is widely agreed that increased productivity is the main contributor to economic growth in U.S. agriculture. The level of U.S. farm output more than doubled between 1948 and 2011, growing at an average annual rate of 1.49 percent. Aggregate input use increased at a modest 0.07 percent annually in the same period, so the positive growth in farm sector output was substantially due to productivity growth.

What exactly is productivity?

The most common measures of productivity are ones like corn production per acre. These have been used for many years – but probably only because the single-factor underlying data was easily available.

But with all the data available today, total factor productivity (TFP), taking account of the use of all inputs to the production process (seed, fertilizer, chemicals, energy/fuel and time), is more the norm for the USDA and farmers alike.

On a year-to-year basis, annual productivity growth is the difference between growth of agricultural output and the growth of all inputs taken together. Productivity therefore measures changes in the efficiency with which inputs are transformed into outputs.

Something must be going right, since farm output has more than doubled over the last half-century. Some part of this productivity improvement comes from the tractors and machines and effectively managing their associated inputs – fuel consumption, operating and maintenance costs and the like. Let’s take a look a little further at productivity and the tractor.

More than three-quarters of all farm tractors are powered by diesel engines, and as fuel prices have risen, using the most fuel-efficient tractors is an increasing consideration. According to the U.S. Energy Information Administration, distillate fuels, such as diesel fuel and diesel oil, were the number one energy input for both livestock and crop farming, and in 2014 the cost for diesel fuel (off-road use) averaged about $3.50 a gallon nationwide (Figure 1). 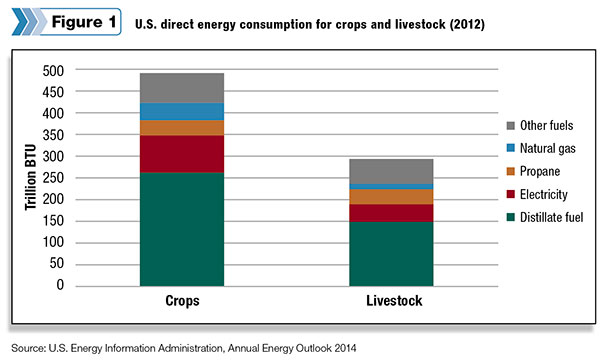 According to the USDA, energy-based inputs account for a significant share of agricultural production costs; more than 30 percent of total production expenditures by corn, sorghum and rice farmers in 2011 were for energy-intensive inputs.

During a period in which U.S. agricultural output increased by roughly 10 percent, total on-farm energy use rose only 6 percent. Nonetheless, as energy prices trended upward over the decade, the share of energy inputs in total production costs increased. For major field crops, energy’s average share of total production costs increased by 4 percentage points between 2001-2005 and 2006-2011. (USDA NRCS; 2013).

There are bigger farm tractors available today than ever before that are able to use equally large implements that can work more ground in less time, using less fuel. By the same token, it isn’t very efficient to use a 600-hp tractor for utility jobs around the barn.

Tractor efficiency measures themselves have changed. With the new EPA fourth-generation emissions standards (Tier 4) now fully in effect, testing tractors for fuel efficiency had to change to accommodate many manufacturers’ emissions control systems (selective catalytic reduction or SCR) that require the use of a new fluid (diesel exhaust fluid or DEF.)

This changes the productivity assessment for the tractor to include this new input used to meet the new EPA requirements. Fluid economy is a new measure that includes diesel fuel consumption and DEF consumption.

While the SCR systems have added a new measure and cost, they have also reduced fuel consumption more than otherwise would have been possible for a net benefit of several percentage points over older-generation technology.

These days, the biggest gains in productivity from tractors are just as likely to be coming from outside the engine compartment, from electronic control systems and connectivity of the total machine.

The explosion of electronics present in our everyday digital lives has brought many benefits and a new level of information and understanding to the farm tractor as well. It wasn’t that long ago when the hour meter on a tractor was your indication it was about time for some form of maintenance.

Today’s new-generation tractors’ operating conditions and maintenance needs can now be precisely monitored and controlled from afar, in the field or on your smartphone. Analog displays replaced digital displays with real-time data of more parameters than you knew existed. The productivity hook here is saving time from breakdowns and effectively scheduled maintenance as the systems monitor themselves.

Tractor electronic command centers and their cab controls are truly amazing. After you get over the idea that the tractor cab now looks a lot like the video game controls and screens your kids play with, there’s a lot to learn and ultimately love and appreciate about what the new technology offers.

Today’s tractor electronic systems tell you what used to be done purely by feel: the feedback from the tires and steering wheel, the whine of the engine or PTO, or the amount of smoke coming out the exhaust stack.

These were all indicators of machine performance and (along with your wristwatch) were a measure of work productivity. Tweaking up the throttle, adjusting the implement depth or shifting gears was done in response to feel, to try to find the right amount of power and speed or how much more there was left to do.

Today’s electronic and cab control systems take the guesswork and inconsistency out of “the feel” and instead shows you the exact “sweet spot” for fuel saving. It factors in things like proper ground speed, engine RPMs and even implement performance. Operating the machine in that sweet spot on the LCD monitor with your joystick will maximize that machine’s productivity, lowering fuel consumption and saving time.

And most of today’s row-crop tractors have cruise control and guidance settings that maintain a constant engine speed, thus constant ground speed as the load on the tractor varies. This is especially useful during lighter load operations such as chemical incorporation, fertilizer applications and seeding when maintaining a constant speed is critical to application rates.

Productivity goes up as you utilize the proper machine in the proper way in the field. The new norm is all based on precision field work, using telematics, GPS sensors and communications systems. This enables the precision placement of crops and optimizes the operation of the tractor in the field.

For example, springtime row-crop seed planting is a critical process that can make or break yields and overall productivity, and if not well managed can drive up the costs of expensive inputs like seed and fertilizer.

New corn planting technology for proper depth, cover and drop can precisely lay down and cover seeds at GPS-specified location and rates, and for at least one manufacturer, can do all that at 10 mph (John Deere’s ExactEmerge); a pretty good clip for any tractor.

The next layer of productivity and efficiency tools comes from using the precision farming systems, not just for the tractor operations but also the entire farm business. The precision farming systems all have proprietary names – AGCO’s FUSE, John Deere’s JDInsight and Case Advanced Farming Systems (AFS), to name a few. They all measure and bring together critical data on your total farm operation from the tractor to your tablet computer.

The lesson here is: You can’t manage what you can’t measure. Making better decisions and getting more productivity out of your farm all starts with systematically gathering data on the inputs and outputs, including that from today’s high-tech tractors on a real-time basis.

The data collection and analysis systems on tractors and machines are delivering more results than ever and absolutely worth the investment over the long term. As to whether a $100 electronic poultry bacteria sniffer connected to my phone might be helpful and increase my productivity – I think I’ll stick with my nose, thank you. PD