The largest factor affecting forage drying is sunlight. Thus, a previous article I wrote showed that putting forage into a wide swath following mowing had the largest effect on drying rate. Tedding and inverters can fluff the swath to enhance drying. Rakes and mergers will narrow the swath into a windrow for the baler or choppers and also expose some wetter material to sunlight to enhance drying.

However, we must realize that forage has the most yield and highest quality when it is cut, and every operation thereafter results in leaf loss, reducing both the harvested dry matter and forage quality. In particular, losses increase when handling occurs with drier forage. 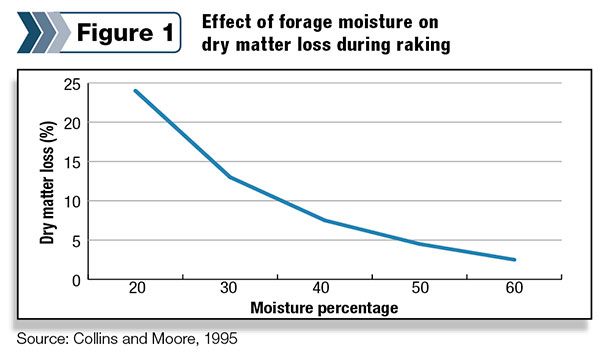 Tedders break up a windrow that has become dense and will not dry properly. Tedding should be done in the morning after the dew is off but while the hay is still tough. Tedders are recommended for grass hay, which tends to settle into a mat that dries very slowly.

They are not recommended for alfalfa hay, which should dry adequately if put into a wide swath (covering at least 70 percent of the cut area). If done when hay moisture content is above 50 percent, leaf losses can range from 2 to 3 percent for grass and 5 to 7 percent for alfalfa. You can lose up to 15 percent of dry matter when alfalfa hay is tedded at lower moisture contents.

A windrow inverter turns windrows over to expose wetter material at the bottom of the windrow. This machine is not likely to be of benefit if one starts with a wide swath, but will increase drying by zero to four hours (with associated dry matter loss) if one began with a windrow. Inverting is a gentle hay-handling process and has lower losses than raking.

Raking is done to narrow the swath for the baler and also to move the wetter material at the bottom of the windrow to the outside. Every time hay is raked, there is some leaf loss, so rake strategically. The drier the hay is at raking, the greater the leaf loss.

If possible, rake alfalfa at moisture contents between 30 to 40 percent as a good compromise between low leaf loss and good drying. Leaf loss can be extremely high if raking at 20 percent moisture or less. Hay that is almost dry is less likely to shatter if raked in the early morning when the dew is still on.

Parallel-bar rakes were the dominant machines used to manipulate forage crops in the Upper Midwest for many years, but sales of these machines are declining annually.

They are considered to be less aggressive (with reported losses of 2.1 to 3.5 percent at 40 percent moisture) though more expensive than wheel rakes and are not available in wider widths. Parallel-bar rakes have a power-train and more moving parts to maintain. They also scrape across ridges or unevenness in the field and incorporate soil into the hay.

Rotary rakes originated in Europe to handle the heavy, wet grasses harvested there. Some twin-rotor rakes move hay toward the center forming a single merged windrow, while others have identical rotors on both sides so all hay is moved in the same direction, moving hay to the side of the machine rather than the center so that when the next pass is made, another merged windrow is laid beside the first.

Rotary rakes are PTO or hydraulically driven so tines can be adjusted to operate above the ground, thereby minimizing soil and stone contamination of the windrow. Rotary rakes speed hay drying by making fluffy, light and uniform windrows that dry faster.

When operating, the correct combination of tractor gear and engine speed must be found so all forage is swept into the windrow, but the rotor is not turning so fast that leaves are battered from the stem. Dry matter losses of 8 percent have been reported from rotary rakes.

Wheel rakes are the lowest-cost rakes because individual wheels are ground-driven and no power-train is required. Higher-end wheel rakes have wheels mounted in front of the frame to handle larger crop volumes and have hydraulic controls for folding and width adjustment. Better wheel rakes have larger-diameter wheels with stiffer teeth and larger overhead frames to accommodate these larger wheels.

All wheel rakes have springs whose tension can be used to adjust the float of wheels. If wheel float is too light, some crop is left behind, but if too heavy, tooth wear is increased and more soil and stones are included in the windrow. Generally, wheels should have about 20 pounds pressure (or slightly more with a windscreen). Dry matter losses of 3.5 to 9 percent have been reported from wheel rakes.

Mergers pick up swaths or windrows and move on a conveyor belt to place forage into a single windrow. While they are the most expensive, they also result in lower forage ash content and leaf loss than when hay is raked.

Tips on setting and operating rakes

Except where indicated, tips are for rotary rakes:

Some rake designs are more aggressive and do a better job of fluffing but are also more prone to leaf loss, particularly at lower moistures. Some designs result in more uniform, consistent raking without bunching. The bunching can result in wet spots and heating in bales.

Generally, hay is best in a windrow if a light rain (0.05 inches) occurs and best in a swath for heavier rains. (Though leaf loss is great, drying is better after the rain.)

If a partially dried hay field does receive a heavy rain, tedders or rotary rakes can break up a windrow that has clumped and matted into the stubble. Moving a windrow onto a drier surface or fluffing onto stubble can speed drying. Avoid using a tedder on alfalfa at moistures less than 50 percent.

Alfalfa can be dried most rapidly by conditioning properly, placing into a swath over at least 70 percent of the cut area and raking into a windrow at 50 percent moisture. Every additional operation costs labor, fuel, dry matter and quality loss, and the extra traffic will reduce yield of the next cutting. PD

Dan Undersander is with the University of Wisconsin. He can be contacted by email.