14 years of multiple component pricing: What has changed?

Since Jan. 1, 2000, about 85 percent of the milk regulated by Federal Milk Marketing Orders has used multiple component pricing (MCP) to pay dairy farmers. Under federal order MCP, dairy farmers are paid for their milk production based on pounds of butterfat, protein and other solids. Combining the values of these components equals the federal order Class III price.

In addition to the component payments, there is a producer price differential (PPD) paid on a hundredweight basis. The PPD includes the value of each order’s Class I and II differentials. Also, four federal orders include an adjustment for somatic cell count.

This article takes a look at the past 14 years of MCP in regards to changes in component values, components and their impact on the milk check, and dairy farmers’ responses to MCP.

The most significant change in component values is other solids. See Figure 1. First, let me provide a refresher on what the other solids in milk are. Other solids are the components in the skim portion of milk found after subtracting protein from solids-not-fat. 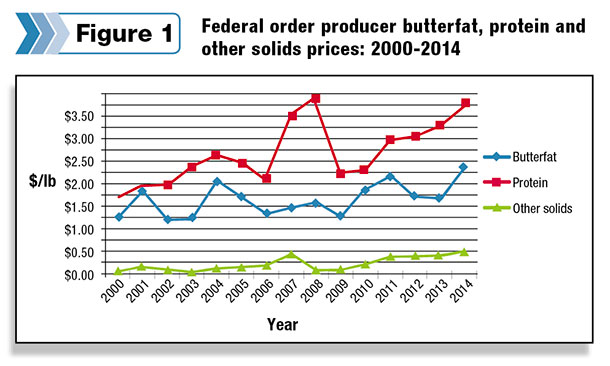 The highest annual protein price was back in 2008 at $3.89 per pound. Since the 2009 price collapse, protein has increased in value each year. Looking at butterfat, last year saw the highest butterfat price, at $2.38 per pound. 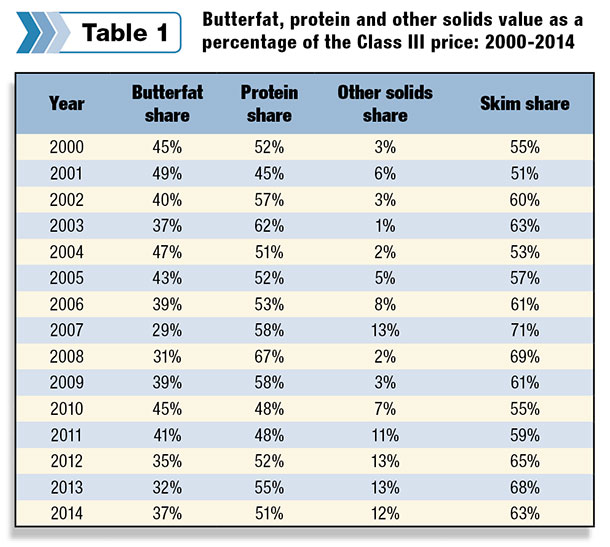 One of the objectives of MCP is to give dairy farmers the economic incentive to increase the component content of their milk production, especially protein. It is the solids in milk (butterfat, protein, other solids) that determine the yield of most manufactured products.

In manufacturing cheese, which utilizes more than half of the nation’s milk production, protein is the most important factor in determining yield. In other words, the more protein in milk, the more cheese manufactured from that milk. Dairy farmers have responded positively to MCP, especially in increasing protein content (see Table 2). 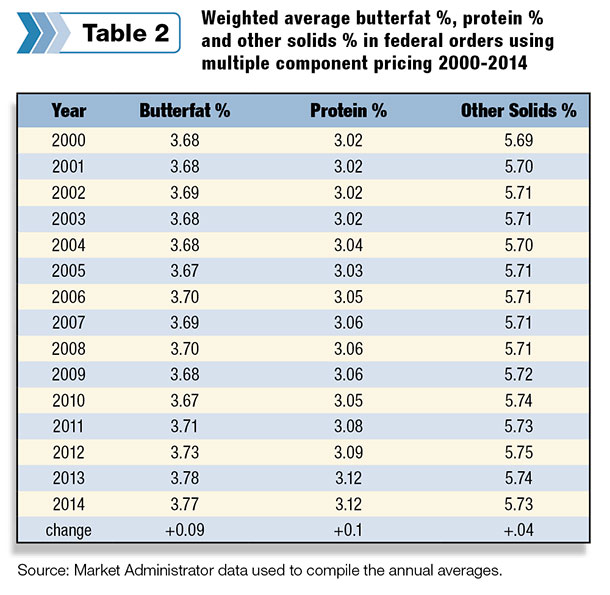 In 2000, the average protein content of dairy farmers’ milk production, in orders using MCP, was 3.02 percent. During the past two years, protein was 3.12 percent, a full point higher than in 2000. Note also that butterfat increased as well, and there was a small increase in other solids.

What have dairy farmers done to increase the components in their milk production, especially protein? It is a combination of several factors. MCP allows dairy farmers to easily and directly see the contribution of the different components to their milk check, which encourages improvement.

Thus, through their breeding and nutrition programs, dairy farmers focus more on improving protein content. Most A.I. companies emphasize the protein transmitting ability of their sires. Plus, the increased use of Jersey genetics has aided the improvement of milk component levels as well.

In summary, milk component values have changed since 2000. The most significant is the increase in the price of other solids. The majority of milk’s value is the skim portion, protein and other solids. This is projected to continue. Most important, dairy farmers have responded positively by increasing component levels, a response that has and continues to provide significant economic benefits both at the farm and plant. PD