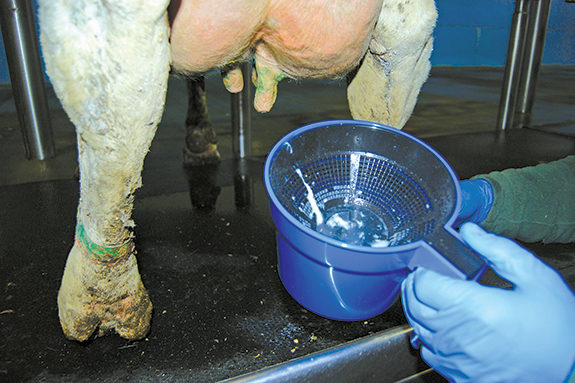 Questions about milk quality: What is the difference between clinical and subclinical mastitis

The most obvious abnormalities in the milk are flakes, clots and a watery appearance.

Abnormalities associated with the udder are heat, swelling and sensitivity to touch. 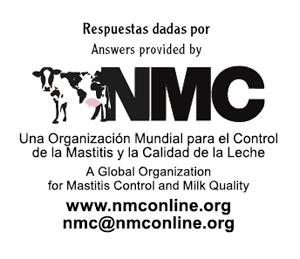 The severity of clinical mastitis is described as mild, moderate or severe. Acute clinical mastitis is the severe form of the disease and is characterized by a sudden onset of symptoms and visible abnormalities such as udder swelling, hardness of the affected quarter, pain, watery milk and reduced milk yield.

Cows may also be systemically affected and have fever, dehydration and refuse to eat.

The most common way to detect clinical mastitis is stripping a few squirts of milk into a strip cup at the beginning of milking to check for abnormalities such as clots and flakes.

Visual observation and palpating the udder for signs of inflammation can also help identify clinical mastitis but should not substitute for stripping.

Subclinical mastitis is inflammation of the mammary gland that does not create visible changes in the milk or the udder.

Although the milk appears normal, subclinically infected cows will produce less milk, and the quality of the milk will be reduced. In addition, infected cows can be a source of infection to other animals in the herd.

Since there are no visible abnormalities in the milk, subclinical mastitis requires special diagnostic tests for detection.

Somatic cell count (SCC) is the most common test to detect changes in the milk due to the inflammatory process. The greater the SCC in the milk, the higher the level of inflammation in the tissue. 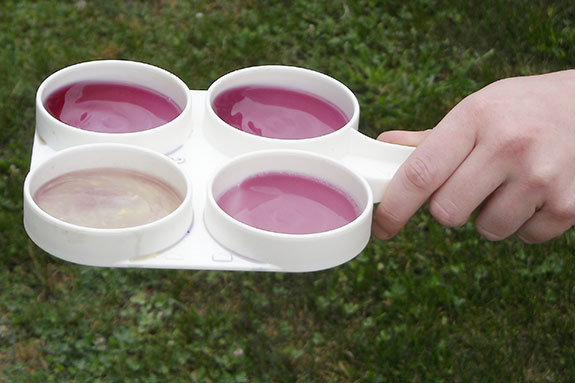 There are several ways of getting SCC data on each cow. Having somatic cell counts run monthly on each cow through the DHIA program is one approach.

Some milking systems have the capability to measure electrical conductivity of milk as a way of detecting subclinical mastitis.

Routine monitoring and detection of both clinical and subclinical mastitis are key components of a herd health program.

Knowing the incidence and prevalence of clinical and subclinical mastitis provides the herd manager with information to change milking management practices and improve facilities/equipment as needed for better control of this important disease. EL

BOTTOM RIGHT: Additional testing methods are needed to detect subclinical mastitis since the milk appears visibly normal. These tests include somatic cell counts (SCC) obtained from DHIA testing, or indirectly by the California Mastitis Test (CMT) as shown in photo, or by other cow-side SCC tests. Photos courtesy of NMC .