Three years ago I bought Molly, an American Milking Devon cow, from Bundten Farm in Orford, New Hampshire. Bundten was a small raw milk dairy that made cheese, butter and yogurt on-farm. State inspectors visited them twice per year, and samples were collected for testing four out of every six months.

Provided they passed these tests, their milk and processed products were all for sale at the farm. Once Molly crossed state lines into Vermont, the differing laws would prevent anything except raw milk sales at the farm unless samples were hand-delivered to the state lab, a mere 90 minutes away. Even with testing, processed products could not be sold at all, and milk could only be delivered to customers, not sold anywhere off-farm.

Although Vermont’s regulations may seem onerous in this instance, to some both states may appear to have a fairly casual approach. Nationally, raw milk laws vary a great deal. There is a federal ban on interstate raw milk sales for human consumption, which has prompted states to make their own laws regarding consumption. 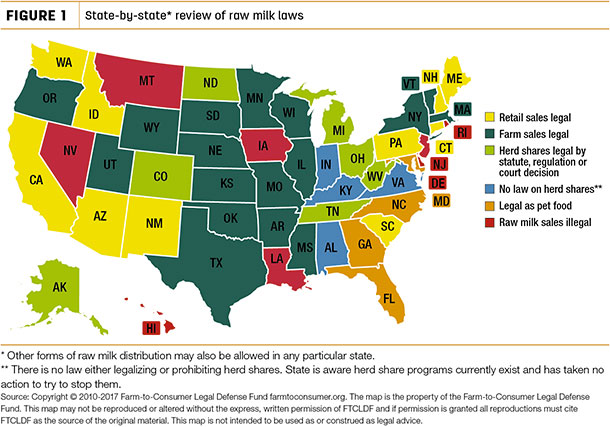 The myriad of state laws has created confusing and ineffective regulations that seem either to hurt small farmers or strike fear into its consumers. Considering milk science and the purpose of regulation, the New Hampshire approach appears to be the smartest, most effective and fair among the many options.

To help navigate the variety of regulation out there, Farm-to-Consumer Legal Defense Fund maintains a map and the following summary:

“Retail sales” are bottled milk sales at a store not owned by the producer. “On-farm sales” are sales made on the farm where the milk was produced. “Herd-shares” are multiple owners of a cow or a herd who pay a farmer to manage the animals to provide milk to the owners.

Having no law on herd-shares means the state hasn’t explicitly prohibited or allowed herd-shares and has done nothing to stop them (essentially looking the other way). Some states allow raw milk to be sold as “pet food only” or “not for human consumption.” Eight states don’t allow any sales of raw milk at all.

In addition, counties like Suffolk in Massachusetts (which contains Boston) don’t allow any raw milk sales. The variation is essentially fractal.

Raw milk is a divisive and emotional issue in many communities with conflicts regarding its safety and healthfulness. These conflicts have made sensible regulation and compromise difficult to attain, leading to a diversity of laws, as seen above.

If the debate were distilled into two sides, one would contain small farmers, consumers and organizations like the Weston A. Price Foundation: “Over the past 10 years, a half-dozen studies out of Europe all point in the same direction, namely that consumption of raw milk during childhood provides protection against allergies, asthma and eczema.”

Supporting this statement, a 2014 study in the British Journal of Nutrition stated, “Overall, the present study adds to the evidence that consuming different types of milk [raw and pasteurized] can affect allergic responses to a non-related dietary antigen.” With advocates like Weston A. Price, consumers have begun to believe in the power of raw milk.

Small farmers also like raw milk because it allows them to take their product direct to market, maximize their profit and bypass the distribution and bottling industries.

On the other side of the debate are the distributors, bottlers, the Center for Disease Control: “... raw milk and products made from it (including soft cheese, ice cream, and yogurt) can pose severe health risks, including death.” For the record, two deaths have been attributed to raw milk from 1998 to 2011.

The major argument from the CDC is: Raw milk may carry dangerous pathogens either shed from the animal or introduced during processing and handling. The bottlers and distributors support this, and they represent the 97 percent of milk consumed in the country that is pasteurized.

Despite the fervor on both sides, some facts should be considered universal axioms of the milk world:

With these “truths” in mind, reconsider New Hampshire, a state without raw milk illness in recent history. New Hampshire allows the sale of raw milk and raw milk products anywhere. It sends state employees to farms to inspect facilities, collect samples of all their products for sale and their containers.

Raw milk samples must meet the same stringent standards as pasteurized milk per the Federal Pasteurized Milk Ordinance. This regulation is reasonable, inexpensive and effective. It relies on existing systems and federal standards. It treats raw milk like milk.

Do Floridian public health officials think only allowing raw milk to be sold for pet food is keeping the general public safe? Or are people who believe in the health benefits putting their families at risk consuming “pet food” milk without testing, inspection or accountability?

Does Vermont’s fear-inducing raw milk label sound sensible? “This product has not been pasteurized and therefore may contain harmful bacteria that can cause illness particularly in children, the elderly and persons with weakened immune systems, and in pregnant women can cause illness, miscarriage, or fetal death or death of a newborn.”

Using the same systems and science to ensure food safety for other dairy products, raw milk can be held to the same standards and made safely for human consumption.

However, until the states align or the federal ban is lifted and the Federal Pasteurized Milk Ordinance expanded, consumers and farmers must do their homework. Consumers should ask about testing, visit farms and be aware of the laws.

Farmers must also know the law and voluntarily test if not required. (It can help address many health issues.) Finally, advocates on both sides of the debate should seek compromise through sound science and give people the freedom of choice to make up their own minds about a food as old as history.