For the owners of Rosy-Lane Holsteins, healthy cows are the heart of a profitable dairy operation.

The farm’s over-reaching goal is to produce 1.7 pounds of milk for every 1 pound of dry matter intake.

“That number summarizes your entire operation’s efficiency and health of every aspect of your operation,” he said. 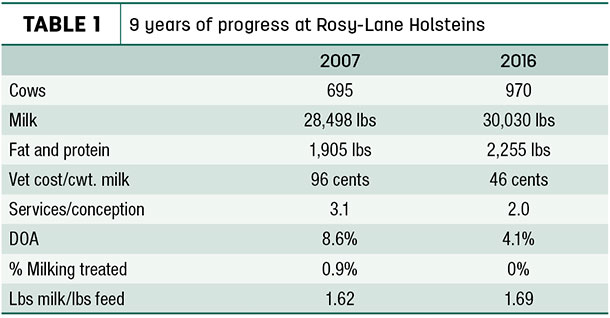 Just as that number is all-encompassing, Holterman doesn’t attribute any one effort to excellent herd health. A number of factors have led to the farm’s ability to maintain zero antibiotic treatments in the milking herd for more than 46 consecutive months.

“It starts with great people,” Holterman said. Matthews is fluent in Spanish and spends a lot of time teaching and training farm employees. The farm uses written protocols to reinforce this training.

“We don’t have fancy housing, but we have good, practical housing,” he said.

Starting at 4 months old through the milking herd, animals are housed on sand-bedded freestalls.

“Sand is the gold standard,” Holterman said, adding, “Sand is really critical to our program, and we go through a lot of sand.”

“We do a lot of maintenance on our milking parlor to make sure it’s running top-notch,” he said.

The farm dry treats every cow. A few years ago, it tried only treating cows with a cell count over 250,000 at dry-off, but a few months later as cows calved in, the herd’s overall cell count began to increase. They quickly reversed course and have been dry treating all cows ever since.

It also alternates between J-Vac and Endovac. “That’s not the recommended way, but we kind of thought J-Vac was losing its effectiveness, so we tried Endovac and had good results,” Holterman said, “but we’re actually doing every other time.”

They test clinical mastitis cases on a tri-plate incubator. Klebsiella is the farm’s primary cause of mastitis. Antibiotic treatments were not working, so instead they infuse hypertonic saline in the vein to dehydrate the cow, followed by water to rehydrate. “Dehydrate. Rehydrate. Just like when you have a cold, we flush the toxins out,” he said. “This has been a lot more effective than when we used antibiotics.”

The farm has had the same nutritionist since 1987. “He does an outstanding job,” Holterman said.

The feeding strategy is to put good feed in front of the cows 24 hours a day. They do not want an empty bunk.

The diet is 51 percent grain and 49 percent forage because corn yields more per acre than alfalfa. “Feeding higher-grain diets always yields more milk and less cost in my part of the country,” he said.

The farm’s veterinarian designs the protocols they use. Otherwise, farm employees handle most herd health events, such as vaccinations, treatments and ultrasound.

While the farm team has eliminated the use of antibiotics on milking females, they continue to administer antibiotics for treatments in calves. However, they are trying to reduce this need by breeding for immunity and keeping a clean environment.

With a goal for healthy lungs and healthy stomachs, they focus on good ventilation and cleanliness in the calf barn. A positive-pressure ventilation system brings fresh air in from the outside. Pails and bottles are kept clean, and calves are bedded almost every day.

“You can overstock freestall barns a little on 2-year-olds, or maybe late-lactation cows, but don’t do it to your prefresh pens,” he said. “If you want to eliminate ketosis, milk fever, a lot of other problems, have empty stalls for [prefresh] cows. They should be able to lie down whenever they want.”

They keep a stocking density of 90 to 94 percent in this pen. The sand stalls are bedded twice a week. Cows are given feed free of molds and mycotoxins, and the waterers are cleaned regularly.

Since the farm is milking cows 24 hours a day, they implement just-in-time calving. There are always people on staff trained to do calvings. Once a cow begins calving, she is moved to a bedded pack. The trained employee will check the position of the calf and, if everything is fine, they will let the cow calve for up to seven hours before they interfere.

After every cow calves, more straw is added to the bedded pack. The small calving area is steam-cleaned and disinfected once a week in the winter and twice a week in the summer.

“We use a very strong hospital disinfectant in that whole area. It actually saves a lot of bedding and saves a lot of resources,” Holterman said. “Once everybody gets used to this, and you get compliance from your employees, this works excellent.”

Newborn calves are also kept in a clean environment. The calf is moved to a little box and wrapped in a blanket instead of straw. Unlike straw, the blankets can be washed, and every calf gets a clean blanket. The navel is dipped no less than three times – twice in the calving area and once in the calf barn.

Cows are milked and calves fed within 30 minutes of calving. Bovikalc is administered to cows at calving to combat milk fever.

All cows are housed together after they calve. He said it is probably better to keep 2-year-olds and older cows separate, but their facilities aren’t set up to allow for that.

They have 58 stalls and never exceed 56 cows in this pen. “We really believe if you want to overstock, this is not the place to do it,” he said.

At 15 to 21 days after calving, they use daily milk weights to see which cows are milking the most for their age. If they are healthy and ready to go, they will be the first to move from the pen. Cows with some problems or are trailing a little behind will stay in the fresh pen until 23 or 24 days. At that time, a decision is made as to whether that cow will be able to make long-term contributions to the herd.

Ketosis prevention begins at dry-off with only one diet fed through the entire dry period.

“If you put too much energy in these cows before they calve, that energy goes to udder swelling, bigger calves and the liver. All three of those things are horrible for the cow,” he said. “We let the cow be a cow. We let them calve and then bring in the energy when they can get rid of the energy in milk production.”

For the last 25 years, they have not fed a transition diet. Before that, Holterman said, they had every problem associated with too much energy – milk fever, ketosis and bigger calves.

This last year, in 1,200 calvings, this farm did not have a single clinical ketosis or clinical milk fever case and just six displaced abomasum events. Retained placentas and metritis are less than 2 percent.

“I have to give a lot of credit to our nutritionist and more credit to our feed mixers. They are the people that do it accurately every day, and that’s hard to do,” he said.

With a low incidence of disease, they are able to leave their fresh group alone. They don’t check temperatures every day but instead watch how they are doing with daily milk weights. If a cow isn’t increasing in milk, then they go check on her. “Other than that, we leave them alone,” he said.

The farm invested in a hoof trim chute, which was placed in a lean-to off the holding area. They trim hooves one afternoon each week.

They use a copper sulfate footbath once a week and fill the footbath with soap and chlorine twice a week.

“Here’s how you are going to reduce antibiotic use long term – breed for Productive Life,” Holterman said.

A farm’s genetic program should target what the farm wants. “If your goal is to have high type, target high type. If you’re in a fluid market, you want pounds of milk. We’re in a component pricing system; all of our milk goes to cheese; that’s why we select for these things,” he said.

However, they also want cows that last. A herd full of 2-year-olds reduces labor and feed efficiencies.

“You need your cows to last. You want cows in third and fourth and fifth lactation. So our target is to only have 38 percent of our herd be 2-year-olds,” Holterman said.

“I think it’s important to set goals, but don’t make your goals too high that you’re not going to achieve them or you’ll be frustrated,” he said.

Holterman added, “The trick is constant improvement. It’s not just nailing them every single year.”

In the past nine years, Rosy-Lane Holsteins increased its herd size and milk production while lowering its vet costs. Services per conception and dead-on-arrival rates improved. Percent treated is now at zero. Pounds of milk per pound of feed increased from 1.62 to 1.69.

“All we did was take better care of things and invest a little in genetics. That’s 0.07 pound of milk more coming out of every pound of dry matter because we improved health and bred the cows for more productivity and improved protocols we were doing anyway,” Holterman said. “That’s a huge number. You can’t do that if your cows aren’t healthy.”