Efficiency, innovation and automation are all under one roof in a 12-robot, 900-cow barn at Herrema Dairy.

Just six months into the new facility, farm manager Cory Craig and robotic farm manager Caleb Herrema have hit the ground running, averaging just shy of 90 pounds of milk per cow per day. Technology helps the men make it happen, with only three people working in the barn to care for cows and manage data.

Featuring a novel barn layout and a different take on mechanical ventilation, the dairy in Fair Oaks, Indiana, is able to run lean on labor while providing a comfortable and consistent cow environment.

Farm manager Cory Craig cites labor as the driving factor in the dairy’s adoption of robots. “It’s hard to find people to do the job and to do it right,” he says, speaking with 16 years of experience on the dairy. Now, both he and Herrema see less is more, and automation makes that possible.

“I run this barn with two guys plus myself,” Herrema says, noting someone is always “on call.” Two employees can get the work done, with one fetching and the other working with the robots and cows. That equates to 15 to 16 man-hours per day required to harvest milk from the 720 cows and care for the additional 180 dry cows in the barn.

An automated feed pusher running the length of the barn 10 times daily keeps the ration within reach, and alley scrapers remove manure to maintain clean, dry floors. With the objective of reducing labor while providing cow comfort, the stall surface is comprised of a mattress base underneath a waterbed and top-bedded with dried manure solids.

The fetcher scrapes beds frequently, but bedding is only added once every two weeks to curtail cow disturbances.

Keeping human interactions to a minimum is one of Herrema’s highest priorities, preferring people spend no more than two hours per day in each pen with the cows. That includes time for fetching, which is done twice daily and only for animals 10 hours or more out from their last milking.

While less labor is certainly advantageous, the dairy’s efforts to let cows be cows are rooted in a desire to provide a high level of animal welfare. Craig believes this method of milking is a win when it comes to public perception because cows no longer spend time in a holding pen.

Herrema also believes it makes a difference, particularly in “the mindset of the animals.” He explains, “They go from the mentality of being pushed to the mentality of making their own decisions.”

The concept of the cow being in charge of itself is further fostered by the layout of the 15-row barn. A total of 900 cows are under one roof. Four large pens each hold a group of 180 milking cows, and each has three robots configured in an “L” shape with an additional pen for dry cows. 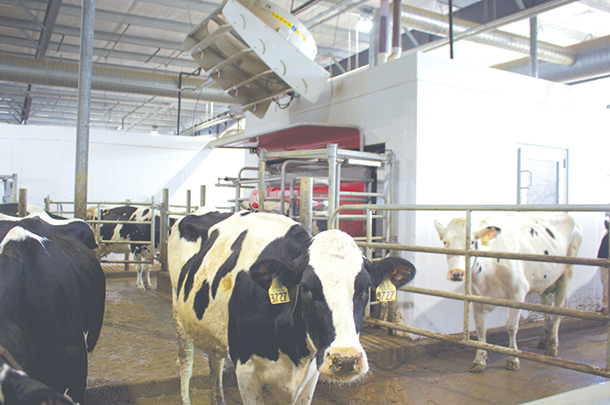 The robots divert cows to a smaller separation pen when, for instance, the monitoring software identifies them for breeding or detects high milk conductivity and milk deviation, indicative of mastitis.

“Veterinary check, cows to breed and sick cows are all done in the separation pen daily,” Herrema says.

This is especially important for cows with a mammary infection. As Craig observes, cows entering the robot to be milked more often to help get over a case of mastitis is “pretty remarkable.” This layout allows it to happen.

“Design is everything,” he says. “Having the ability for sort cows to get back to the robot is key.”

The separation pens permit Herrema to lock up only those cows requiring extra attention. In fact, the main pens are all lined with neckrails to minimize noise and disturbance. Additionally, each separation pen has 10 stalls, feed space and a water source, as well as a built-in treatment chute.

However, despite the amenities, Herrema’s objective is to use the pen only when needed. “I want to route as few cows as possible,” he says. That is why it’s important to not only pay attention to the computer data but to also rely on the fetcher to take notes of sick cows.

“We don’t automatically route a cow if rumination goes down,” he explains. “We watch it and, usually, most of them correct themselves.”

Among the many uses of the separation pen, Herrema also keeps cows new to the robot barn in one of these pens for the first four to five days of adjusting to an automated system.

On the end of the barn opposite of the separation area, each pen has a footbath. The aggressive protocol includes pushing cows through six times per week during the robot wash cycle.

Herrema believes diligent footbathing is of high importance in this facility because the cows do not enter a holding pen where their hooves are washed by a flush system. Thus, manure tends to cake on their feet over time as the scraper passes by.

The low-profile robot barn, measuring 302 feet by 378 feet, features a concept more commonly found in the hog industry than in dairy cattle housing: positive-pressure ventilation. A wall of inlet fans running the width of one end of the barn pulls outside air into the enclosed building, while fans on the opposite end pull the air through it. A few inlet fans are located on the sidewalls as well so fresh air is being pushed in from all four corners of the barn. 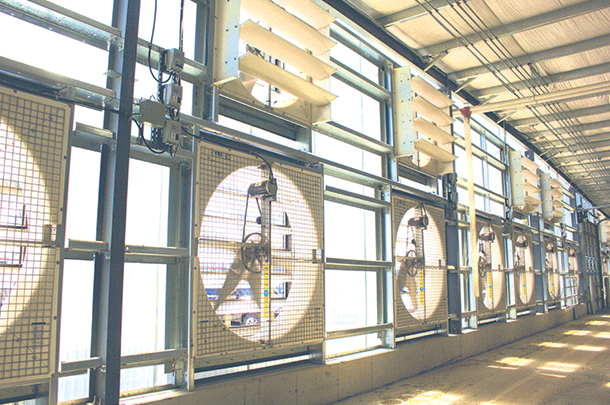 “The inlets and outlets work together,” Herrema says. “It has more fans than a cross vent but uses less electricity because it’s working together.”

Hanging above the beds and each robot are high-velocity recirculating fans to provide cow-level cooling.

“We put fans over the beds to mechanically put air over the cows,” Herrema explains, adding the average wind speed over the beds is 6.5 to 7.5 miles per hour. These fans also have high-pressure foggers to ward off heat stress by kicking on when the temperature reaches 68ºF and humidity is below 80 percent. Sensors at each end of the barn monitor changes in the interior environment and adjust accordingly.

The robot barn sits on the same site as the Herrema family’s 3,500-cow barn with a 72-stall rotary milking parlor. In fact, milk from the robot barn is piped underground to the rotary’s bulk tank. Though the two facilities operate separately, they benefit from sharing resources. For example, Herrema was also able to hand-pick his cows for the robot startup, selecting those with the most conducive udder conformation for automated milking.

He also focused on choosing young cows that would be easier to train – thus, 80 percent are 2-year-olds.

The two barns are within a cow’s walking distance from each other. After spending the first three weeks of their dry period in the robot barn, cows are moved to the rotary parlor’s facility three weeks prior to calving. They calve in and get their first two milkings at the larger facility before coming home to the robot barn for the remainder of their lactation.

So far, Herrema says he is pleased with automated dairying, the barn design and ventilation system, all of which could become a model for other dairies of similar scale to replicate. When asked what he would do differently if given a chance to build it again, his confident response is: “Nothing.”

PHOTO 1: Cow-level cooling is provided by high-velocity recirculating fans and foggers over the cow beds.

PHOTO 2: There are three robots in each 180-cow pen, fashioned in an “L”-shaped layout. Any of the robots can divert a cow to the separation pen (far right), where the cow continues to have access to the robot for milking.

PHOTO 3: With positive-pressure ventilation, inlet fans draw fresh air into the barn, and outlet fans pull it through. The design has more fans than a cross-ventilated barn but takes less energy to operate. Photos by Peggy Coffeen.