Sonic net could keep starlings away

Scientists at the College of William and Mary are using sound waves to interfere with birds’ ability to communicate about food sources and predators, resulting in flocks leaving the premises.

Referred to as a “sonic net,” the sound waves produced by the device can be fine-tuned to specific frequencies aimed at a targeted bird species, masking their attempts to pass along information. The disruption in communications is extremely detrimental to birds, which primarily use vocalizations to help navigate the world.

If the birds aren’t able to vocalize with one another, their survival is at stake, and they will remove themselves from the area (Figure 1). 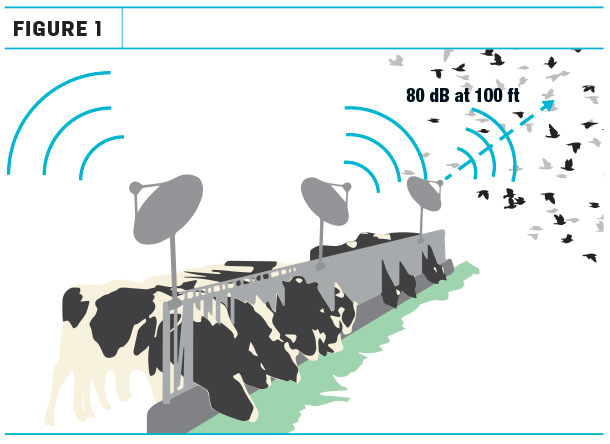 When combined with parametric speakers – directional speakers designed to intensively focus sound into a targeted area, after which the sound dissipates – the technology can potentially provide bird control inside the dairy barn. Although sound waves emitted by the device are within our hearing range, and that of livestock, they can be precisely directed to distract the birds without interfering with cows or humans nearby.

Most methods used to control avian issues on dairy farms focus on annoying the birds. The problem with this type of approach is acclimation. Once a bird or two adapts to the deterrent and realizes it isn’t dangerous, the entire flock returns. Combining several deterrent tactics has been attempted with mediocre results. The birds eventually return.

“To date, no one has had success removing birds from barns,” Steve Rehberg, Flock Free Bird Control, says. “Most of the bird deterrents on the market do not deliver an amount of irritation sufficient to move a flock.”

Trials have shown targeted birds tend to stay away from areas where the sonic net has been utilized. And they stay away for several weeks before attempting a return (Figure 2). 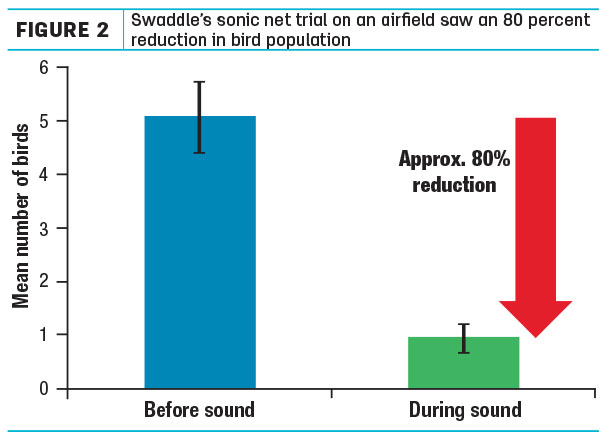 If the birds do return and the nets are again utilized, the effect on the birds is reproduced, and the birds scatter. If a new type of bird tries to enter the area, the device can readily be programmed with other sound files targeted for the specific frequency range of the species of concern.

John Swaddle, professor of biology, and Mark Hinders, professor of applied science, developed the product and tested it on an airfield. They’ve partnered with Sam McClintock, CEO of Midstream Technologies, to bring the product to market and to continue trials on product applications and effectiveness.

Normally, once the birds leave, the device can be turned off or used at intervals to deter re-entry attempts. But because feed is always present for the cows, birds are tempted into the feed alley continually. In order to remain effective, the device would always have to be activated.

“You would not project the sound just on or just over the feed because that is where the cows’ heads are as well. The sound has to be projected over the cattle and out to keep the birds from flying in,” McClintock says. “If the sound is just above the area, projected horizontally at 10 feet, the birds will be in a dive and probably fly right through and get to the feed anyway.”

Ideally, sound would be projected well above the feed area, for a distance of at least 100 feet, to keep birds away while not disturbing livestock. According to McClintock, the baseline cost of this system is around $20,000 per 300 feet of feed alley.

This estimate includes an array of parabolic speakers designed to project sound in one direction, connection to the electric grid, conduit and wiring along one side of the feedbunk, and installation. To deter roosting flocks from tree lines outside the barn, McClintock estimates a price tag of $2,500. In open crop areas, the cost is $500 to $1,000 per acre plus the cost of solar array or grid wiring to power the system.

Inside of a barn, away from the feed area, parametric speakers work to direct the sound to the rafters where the birds tend to roost. But if the sound beam hits a structure, it will be reflected and will become audible in the surrounding areas. Precise calculations and placement of the appropriate speaker technology is imperative.

“Because the technology is audible, we are very cautious about deploying this around livestock. It has been used at a meat processing plant, but we made sure the system was not impacting the cattle as they arrived at the plant,” McClintock says. “We have not yet applied it at a dairy farm or feedlot setting.”

Success rates of 75 to 90 percent reduction in bird populations in the targeted areas are anticipated with regular use.

Both McClintock and Rehberg are optimistic the device will bring lasting relief in the dairy barn setting and do so in a cost-effective manner. Rehberg also says dairy producers will see both immediate and long-term benefits such as reduced losses to high-value feeds, stress on cows, illness and destruction to property like corrosion to steel roofing.

Adding the use of organic tank mix sprays, distributed via an automatic misting system, can irritate the skin, eyes and trigeminal nerve of birds. These misting systems are being used in large stores and other expansive buildings, and the method holds promise for targeted use in dairy barns when used in combination with the sonic net system, according to Rehberg.

Sticky residues and shock tape can also complement deterrent efforts more effectively than plastic owls or similar methods birds will ignore over time, according to McClintock.

“Sometimes it is very difficult to use [the products] without disturbing people or animals, so then we turn to our vendors to use their equipment to cover the rest of the area with things – such as mist systems, sticky residues and shock tape – that will have actual consequences as opposed to plastic owls or similar methods birds will ignore over time,” McClintock says.

For migratory waterfowl concerns in the crop field, “a laser should be the first line of defense, since these migratory waterfowl are scared to death of lasers and will not acclimate at the same rate as residential birds, which fight any attempt to evict them,” Rehberg says.

A new technology for use in large, open crop areas involves a machine mounted on a trailer that shoots air across the field to disperse large flocks of birds.

“[This] is the only tool we know of that has the potential of removing birds from hundreds of acres. I think the biggest use for dairy farmers is to move geese off of forage crops,” Rehberg says.

Crop fields and feed storage areas are other locations where the devices can be effective.

Rehberg concludes, “Based on what I have seen, [this] technology will change bird control in the future,” both in the dairy barn and in the fields.