These include varieties that may be more resistant to some of the latest virulent alfalfa diseases and help withstand heavy stress loads, as well as ones that could make management easier. It takes many years to help develop alfalfa seed with resistance to specific diseases such as aphanomyces, so it’s important to identify these threats that are changing and becoming more destructive.

We work with one of the top alfalfa breeding teams and a variety of universities to monitor these diseases, continually review the latest data and use this collective information to help develop alfalfa varieties increasingly resistant to disease pressure. And we listen to what farmers tell us.

Seedling emergence has a direct impact on yield. Farmers want alfalfa varieties that emerge quickly because the first 30 days of an alfalfa plant’s life will likely forecast the next four years of that stand’s existence. They want great yield potential year after year, with minimal stress loads for those plants.

We’ve found uniform seedling emergence and yield potential can be optimized by applying a seed coating that contains a plant growth promoter, the micronutrients zinc and manganese, a nitrogen-fixing inoculant and two fungicides for multi-mode-of-action protection.

Nothing is more expensive than a re-plant (lost feed, time and money). Having the ability to plant a seed that emerges quickly and has access to the essential nutrients for optimal growth can mean a lot when it’s time to harvest.

A few years ago, we had a very wet spring, and our agronomy team heard from farmers in a few pockets across northern Wisconsin their new seeding alfalfa looked poor. These farmers planted a variety with high resistance to aphanomyces race 1 and 2. 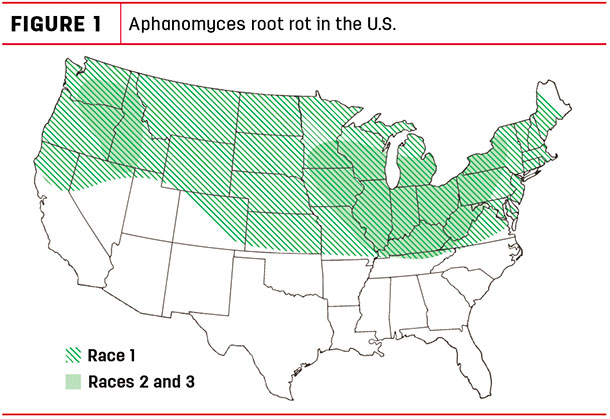 Upon scouting, using the process of elimination and soil sampling, these farms were dealing with a more aggressive race 3 aphanomyces. In wet soils, aphanomyces causes root pruning, loss of nodulation and poor stand establishment, which eventually can lead to reduced yields or even plant death.

Our alfalfa breeders suspected this new race would be making an impact but hadn’t yet identified it on farms. Knowing how devastating this disease could potentially be, the breeding team was able to select plant genetics with superior resistance potential and implement that resistance into our breeding program.

Over time, plant diseases may tend to morph into new races as part of their survival mechanisms. Anthracnose is another disease that is not giving farmers a break. In fact, agronomists and farmers noticed an uptick in this stem and crown disease over the last three or four years.

Current alfalfa varieties have high resistance capabilities against anthracnose race 2; nonetheless, the disease was still hitting hard, causing yield losses of up to 25 percent in some cases.

After field scouting and assessment, the recommendation was to apply fungicide at the third and fourth cuttings to help protect the plant. The tricky part was the application had to be made before the disease was present in the field. Anthracnose usually occurs under warm, moist conditions and causes oval- to diamond-shaped lesions in the stem of the alfalfa plant.

These lesions can enlarge and join together to girdle and kill the stem, giving it a “shepherd’s hook” appearance. Dead stems will be scattered throughout the field. The crown can also become infected, eventually killing the plant.

After assessing this new race of anthracnose, the breeding team was able to identify plant genetics that were resistant and included them in our breeding program.

Because both aphanomyces and anthracnose typically occur in the same regions, our breeders selected plants with high-resistance capabilities to both diseases. This selection will help give growers greater control against these aggressive diseases that can rob them of yield potential and forage quality.

Pat Van Deurzen, a master agronomy adviser in Wisconsin, notes aphanomyces race 2 is prevalent in his area, with aphanomyces race 3 and a new race of anthracnose starting to become more evident.

“We have many fields with heavy soils or ones that don’t drain extremely well,” he says. “We’ve also had a lot of rain over the course of the season, which doesn’t help promote disease resistance. Whatever races of aphanomyces and anthracnose we find in the next five to 10 years is anybody’s guess,” he says.

Flexibility at the forefront

In addition to yield and forage quality, alfalfa producers want flexibility in harvest management. One of the recent advances in this area is lower-lignin alfalfa with glyphosate-resistant technology. This allows farmers the ability to maintain harvest for improved quality or delay harvest for increased tonnage, without sacrificing forage quality, when compared to conventional alfalfa at the same stage of maturity.

“Farmers find this flexibility valuable, and that quality does not drop as significantly as is normal with conventional varieties, while yield continues to increase as harvest is delayed,” says Van Deurzen.

“Farmers are letting the stand go longer, the thought being they can eliminate one cutting during summer. This saves them from paying a custom harvester to do an extra cutting or, if they’re running their own equipment, saves them fuel and labor, which would well have helped paid for the seed trait.”

Our company gathers feedback in a number of ways: through sponsoring VIP sessions with large alfalfa producers, hosting events with large retailers located in areas of heavy hay or dairy production and inviting farmers to participate in focus groups. Farmers know there is a value proposition attached to every product and that they must get a return on their investment to be successful.

Van Deurzen says, “Growers are smart. If they experience a problem, have been asking for a solution and a company isn’t providing it, they’ll switch to a company that might. It’s always important for seed companies to listen and be willing to invest in developing products that help fit farmers’ needs.”