The practice of “tile drainage” gets its name from cylindrical clay tile sections placed end-to-end in trenches dug to a depth of 3 to 4 feet on a small slope.

The small gaps between tiles permitted shallow groundwater entry and flow away from crops. Less water means greater oxygen diffusion into the crop’s root zone and warmer, drier soils, which are big advantages from a germinating seedling or growing crop’s perspective.

While the true roots of tile drainage remain unclear, their benefits loom large. In The History of Tile Drainage, Marion Weaver suggested that perhaps “the men doing the draining were more concerned about getting the job done (installing the tile) than influencing others in their methods.”

It was not until 1583 that an anonymous Englishman wrote about drainage in detail, followed by Oliver de Serre’s Theatre of Agriculture in 1600. He recommended 4-foot-deep trenches to be filled with half stone and half earth to make a covered drain “for the commodiousness of tillage … in order to cut off the source of springs [groundwater], which is the special aim of this business.”

The first cylindrical clay tiles were reportedly made in England around 1810. John Johnston brought the idea of tile drains to America from Scotland after hearing of rich farmland from relatives in central New York. In 1821, Johnston purchased acreage in Seneca County (for $11 per acre) and in 1835 ordered his first pattern tile drain from Scotland.

By 1836, tiles were crudely fabricated by B.F. Wartenby’s Pottery in Waterloo, New York, and by a machine in 1838.

Johnston eventually tile-drained all of his 320 acres and convincingly showed how draining poorly drained fields (and judicious manure application) increased wheat yield and profit per acre substantially over undrained fields.

He was well-known, and his role as Seneca County Agricultural Society president helped spread the word of tile drainage to farmers in the region and beyond. Artificial drainage took hold rapidly in the Upper Midwest during the late 1800s and 1900s, and tiling was important in Colonial times for industrial, municipal and agricultural expansion.

Drain tiles were largely made from clay and installed in hand-dug trenches during the 1800s and early 1900s, but the invention of polyethylene plastic in the 1940s led to corrugated, perforated plastic drainpipe in the 1960s.

Tile drainage remains a critically important soil management practice for farms of all sizes and types. Tile is especially important in the Midwest, where up to 50 percent of cropland in some states is tiled. Tiles are also important in irrigated agriculture, where it lowers seasonally high water tables and prevents injury from salt accumulation.

Tile drainage research
Early research on tile drainage focused on economics and in large measure supported what Johnston and others already knew well: Tile drainage of poorly drained fields pays for itself through increased crop yield and quality.

In northern humid regions, farmers and agronomists would argue that favorable crop production economics on poorly drained fields necessitates the use of tile drainage.

The early observations of reduced runoff and erosion with tile drainage were also supported by field research. In fact, tile drainage was encouraged due to its ability to conserve topsoil.

Various forms of tile drainage are still used today as part of conservation efforts on highly erodible land. For example, a “water and sediment control basin” is a widely utilized NRCS practice that reduces erosion by collecting surface runoff in a shallow basin and conveying to an underground outlet via tile drains.

The objective of tile drainage is to lower the shallow groundwater table to increase air-filled pore space (soil pores are either filled with air or water) by draining water from larger soil pores (termed “macropores”). This excess pore water is referred to as gravitational water from a soil physics standpoint, since it’s water that drains primarily from gravitational forces. 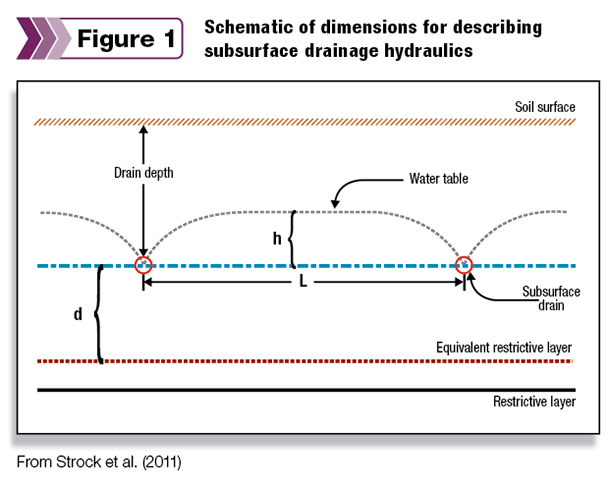 Groundwater is driven by hydraulic gradients into drains when the water table elevation exceeds the tile elevation (Figure 1). Except under high-precipitation events, most flow from tiles represents groundwater and tends to be lower in nutrients.

While benefits of tile drainage are well-supported by research and known to many of us working in agriculture, the recognition that nitrate-N and dissolved phosphorus (P) can leach to drains has focused recent tile research on water quality.

It is important to recognize that in many settings, tile drains can provide more water quality benefits on the whole than costs. For example, in poorly drained soils, surface runoff and erosion is usually the largest source of P in watersheds.

Poorly drained soils have an inherently lower risk of nitrate-N leaching from slower water movement and greater denitrification losses. Since nitrate-N does not adsorb in soils like P does, leaching losses of nitrate-N can be increased with tile drainage.

However, it is important to realize that this is not always the case, and that some leaching of N may be offset by greater yields, N uptake and N use efficiency in the presence of improved drainage from tiles.

Effective nutrient management is crucial to maximize nutrient efficiency and minimize losses in any cropping system, tile-drained or otherwise. Nitrogen applied in excess of crop needs has a much greater risk of leaching. Practices such as proper soil, manure and crop testing, sidedress N application and use of adaptive N management tools during the season reduces the risk of over-applying N and therefore reduces leaching risk. 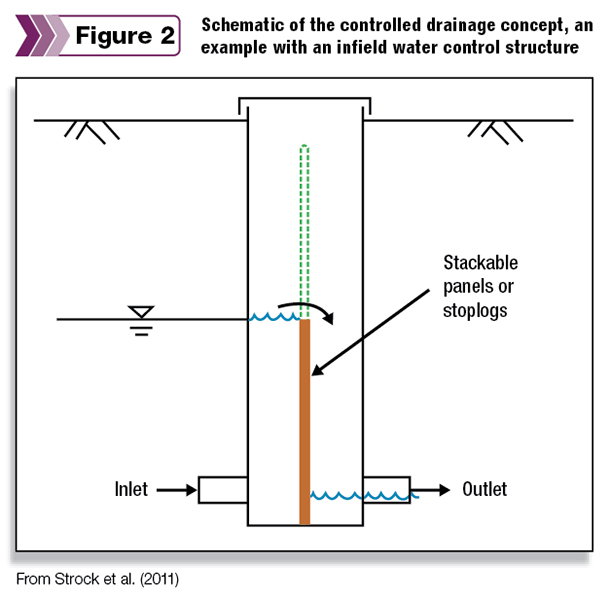 Controlled drainage
Drainage water management utilizes water control structures to raise the water table in the field to a specified elevation (Figure 2) and has proven effective in reducing water and nutrient losses from tile drains.

The concept of controlled drainage (CD) is to raise the water table during the non-growing season to reduce total flow volume. Studies over wide geographic areas in the Midwest have demonstrated N loss reductions of 50 percent. What’s more, research indicates CD can occur without a yield penalty. In some cases, yields have increased with CD, presumably due to greater water availability.

While CD technology may hold promise for some farms, there are concerns over logistics and especially costs and maintenance. For successful CD, fields should be relatively flat (or more structures are required). Another concern is that CD can create more surface runoff, which could present P loss concerns.

Like many things agronomic, utility of CD should be thought of as site-specific. Although cost-effectiveness of CD must be proven before adoption by farms, more precise water management could prove to be a powerful risk management tool for farms, particularly in the face of climate change.

It’s been 179 years since John Johnston first introduced tile drainage and its crop production benefits to the U.S. Today, water management is even more critical to the sustainability of agriculture.