March negative PPDs continue to climb out of 2020 depths

Dave Natzke
Producer price differentials (PPDs) continue their slow climb out of the historically negative depths of 2020, but their complete ascension may still be a ways off.
Dave Natzke 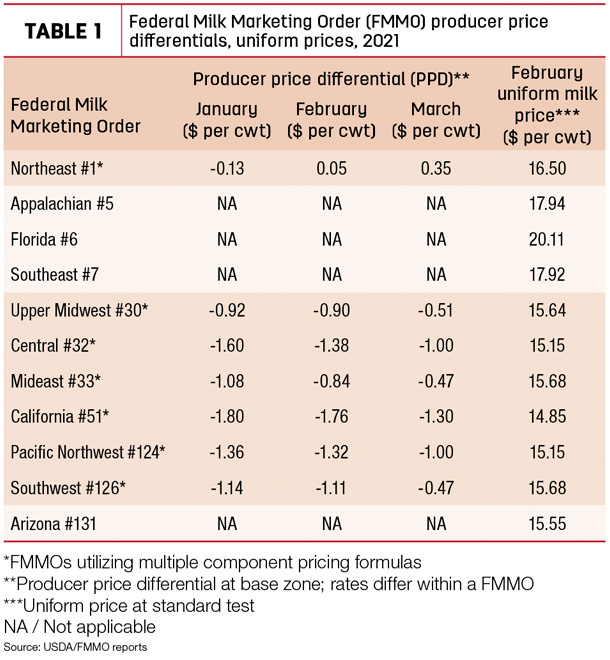 March PPDs improved 30-64 cents from February but remained negative in six of seven applicable FMMOs – although not near as dramatic as those seen during most of the second half of 2020. The Northeast FMMO PPD stayed in positive territory for a second consecutive month at 35 cents.

While some dairy analysts view negative PPDs as simply an accounting tool to balance the value of milk flowing through FMMOs, their depth and duration have affected individual dairy producer’s milk checks. A couple of FMMOs (California and Pacific Northwest) have now seen negative PPDs every month since May 2020, and the PPD has been negative in the California FMMO for 14 consecutive months, since February 2020.

Negative PPDs are one factor in the difference between the monthly “all-milk” price, used as the basis in most risk management programs, and the “mailbox” price, the milk price actually received by dairy producers after marketing costs are deducted. (Read: Pandemic impact shows up in milk ‘mailbox’ prices.)

In an effort to take some of the mystery of PPDs, the Minnesota Milk Producers Association and Wisconsin-based Dairy Business Association cosponsored a webinar, April 13, featuring dairy economist Marin Bozic. He noted negative PPDs are not a new phenomenon, but factors affecting milk marketing last year drove them to new depths for a longer a period. Watch video of Bozic's presentation.

“We've never had a situation before when nine out of 10 consecutive months have negative PPDS [June 2020 through March 2021],” Bozic said.

2. Rising milk protein tests and differences in how protein value is collected and distributed

4. The discrepancy between the advanced fluid price issued before the month starts and the full-month average price

5. The new formula used to calculate the Class I mover

Those factors maintained their grip in March. The FMMO March 2021 Class III and Class IV milk prices were $16.15 per cwt and $14.18 per cwt, respectively. Although the March Class III-Class IV price gap of $1.97 per cwt was the smallest since May 2020, that canyon remains wide by historical standards. And the March Class III milk price was above the Class I base price for the month at $15.20 per cwt.

Those price relationships created incentives for depooling the higher-valued Class III milk. March levels of Class III milk utilization (Table 2) and pooling inched higher on both a volume and percentage basis, although most remained below pre-coronavirus pandemic levels. 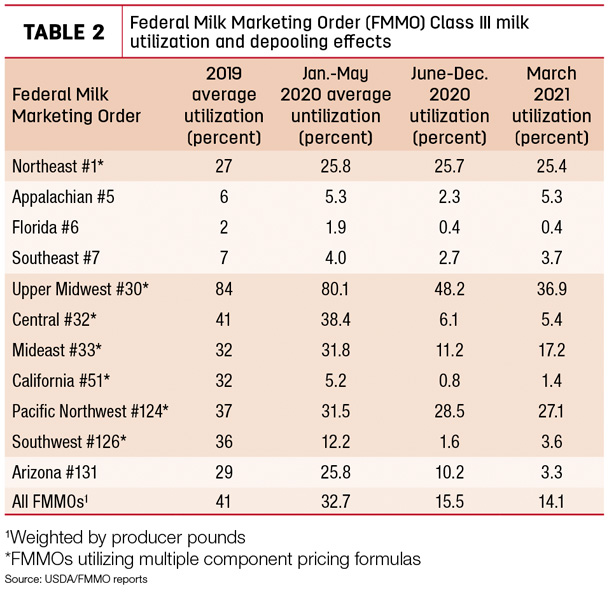 Using the six factors listed above – separately and collectively – over a 10-year period to determine baseline PPDs, Bozic calculated the impact on applicable FMMOs. Based on his analysis, individual FMMOs were affected differently by each factor. However, the Class III-Class IV milk price spread and depooling, often linked to that spread, were the two biggest factors impacting PPDs.