Steve Sweet
As farms have implemented robotic milking into their operations, the perceived challenge of feeding robotic herds has grown. Many farms that have implemented robotic milking or automated milking systems (AMS) have also embraced the idea of free cow traffic in which the cow is free to do as it pleases in the barn on its own schedule.
Steve Sweet

In such cases, are we not only allowing a cow to be a cow, but are we also allowing that cow to express its true production potential and not artificially limiting the production based on our feeding strategies?

This question led to the desire to do additional research asking, “What are producers feeding today?” Our main desire was not necessarily to look at this from an ingredient standpoint but rather from a nutrient point of view. More specifically, “How are dairies splitting their nutrient load between the partially mixed ration (PMR) in the feedbunk and robot feed fed at the AMS?” Recently, we were able to work with 90 free-flow AMS farms across the U.S. and Canada, ranging in herd size from 45 to over 2,000 cows. In conjunction with the University of Wisconsin, PMR and robot feed samples were collected and analyzed for nutrient composition. Additionally, herd metrics were extracted.

Some highlights found were of no surprise, such as the positive linear relationship between total dry matter intake (DMI) and energy-corrected milk (ECM) shown in Figure 1. 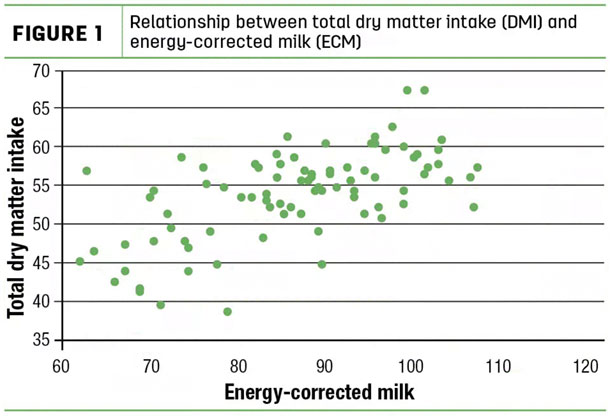 Additionally, we found an interesting positive correlation between the energy (Mcals) fed at the milking robot and ECM (Figure 2).

When you look at the range in Mcals consumed at the robot, we could attribute the range in ECM response to other influencers, such as forage quality. If we keep in mind the theory that greater DMI leads to increased ECM, we should look at factors that may limit DMI. Looking at Figure 3, we can see the benefit of decreasing percent lignin in the PMR to improve ECM (theoretically through an increase in DMI); however, there is the risk of a ration being too low in lignin, which could create feed passage rate issues. Overall, we need to be sure each animal has the opportunity for energy intake to its productive success.

Within the AMS software (T4C in this case), feed tables control the amount of feed administered to individual cows based on days in milk and milk production. If you think of a feed table like a ladder, every 12 inches in measurement would be milk production, and each rung would be the level of feed offered in the milking robot during a 24-hour period. If our rungs are spaced too far apart, it can be difficult to climb the ladder.

The same would happen for a lactating cow in a milking robot. If we alter the amount fed for the level of production, are we shortchanging the animal to “climb the ladder” of milk production and causing a challenge for the cow as it tries to express its production potential?

These feed tables are typically determined by the nutritionist and farmer and thus are customized to each farm. Looking at each of the farms within the study, we started to see a trend when it came to feeding based on production. Cows more favorably responded to feed tables in which the proportion of energy offered at the milking robot remained consistent across each milk production level or rung of the feed table.

In some scenarios this may work; however, depending on forage quality and nutrient composition, the cow may struggle to achieve the necessary DMI at the bunk to support its energy needs for production. Therefore, if we maintain an average of 18% to 22% of total energy at the milking robot across most levels of production, we are able to offer the opportunity for each animal to achieve its potential by keeping a steady energy source and a desire to enter the milking robot for milk harvest.

In closing, if a farm has made the decision to embrace free-flow AMS, the animals are free to do as they please on their own schedules, but we need to be cognizant of allowing each individual animal to express its true productive potential. With AMS, there are over 120 sensors sending the producer and their management team daily data on not only what the herd is telling us, but also on each individual animal. By having these monitoring systems, we can challenge the thought of feeding the herd and begin challenging each animal individually, not only for production but also dollars invested in feed costs.