Shaun Hardtke, director of dairy operations at the farm in Casco, Wisconsin, initiated a more frequent feed pushup program a year-and-a-half ago at Kinnard Farms’ two sites, which include a 5,000-cow cross-ventilated barn with a rotary parlor and a 2,000-cow naturally ventilated barn across the road. Seemingly overnight, milk production jumped in both barns, an increase he solely credits to pushing up feed twice as often. 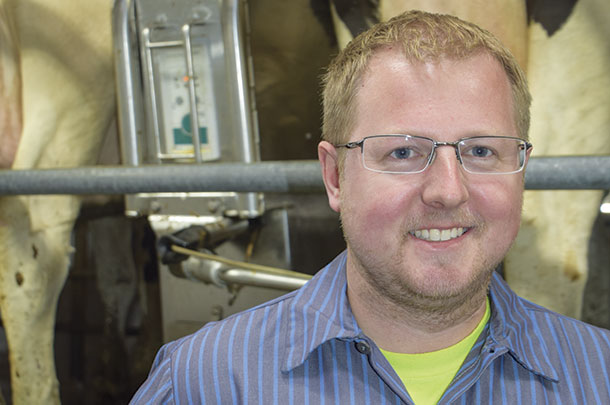 “Previously, we were doing feed pushes every two hours,” Hardtke recalls. “Within the first few days of starting the program of pushing every hour, we bumped up 4 pounds of milk per cow per day.”

While the additional pounds of milk production were a surprising perk, Hardtke’s main purpose behind adding the extra pushups was to solve a series of sporadic digestive upsets the herd had been experiencing. At the time, cows were sorting and slug feeding as a result of extremely dry corn silage and commodity changes within the ration. Adding water to the diet was not an option because of the large volume required.

That’s when Hardtke turned his focus to the controllable factors and hypothesized that getting feed in front of cows more often might be the key to fewer incidences of stomach ulcers and hemorrhagic bowel syndrome (HBS). Though he did not know of other dairies pushing feed on the hour, his gut instinct prompted him to give it a try. More milk and a dramatic decrease in digestive problems resulted almost immediately.

To put some numbers to the improvement, Hardtke and his team monitored feed sorting with shaker box tests. They observed the top two boxes at the time of feeding and then compared those findings to a re-test 24 hours later. The results indicated less sorting, which in turn led to cows eating more consistently and better feed efficiency.

“During this time, our dry matter intakes did not go up, but they were more consistent over a 24-hour period,” Hardtke notes, adding timid cows were among the greatest beneficiaries because they had more opportunities to easily access food than before.

In the front feet, he observed less curling of the front toes, an indicator that cows were no longer pushing and reaching for feed at the bunk. “Within a month, that started to go away,” he says.

While Hardtke admits incorporating hourly pushups into the schedule was a hard sell to employees at first, the team quickly realized their efforts paid back in cow health benefits. He opted to restructure duties and feeding times to accommodate the task without the need for additional people.

To make it work, Hardtke assigned the employees picking up weighbacks to push feed between each pen pickup. Maternity pen and parlor leaders also pitch in with pushups amid their other daily duties.

“We always have two people working 24 hours a day in maternity, so one person is continually pushing feed and walking pens, looking for cows to start calving, while the other is attending to the calves and mothers in the maternity pen,” Hardtke explains. “Of course, we give priority to the babies over pushing feed, if necessary.”

All pens in both barns get the extra pushes, including dry cow pens.

Why not use automated feed pushers?

As Hardtke strategized the most efficient and cost-effective way to implement hourly feed pushing, he weighed out using a skid steer with a blade versus automated options.

While the manual option no doubt came with its own expenses, Hardtke determined that was the most efficient way to move feed multiple times per day down the alleys of the 1,750-foot-long cross-ventilated barn.

“It would take 12 robots to push all the feed in this barn,” he said. “There would always be a robot in the way when it comes time to drop feed.” Those dozen robots would only run in predetermined distances and measurements, resulting in missed opportunities for extra pushes, as cows may consume more feed at certain areas along the bunk and the robot may not know with parts are actually empty.

“We always prefer to have the eyes and knowledge of highly trained people cowside in order to provide a consistent ribbon across the entire pen,” he added.

Hardtke estimates the cost of pushing feed every hour with a skid steer to be around $12,000 each month, but the effort more than pays for itself. “It definitely costs more in labor, fuel and skid steer hours, but that 4 pounds of milk per cow pays for itself many times over,” he says.

Mounted onto a skid steer, a heavy-duty V-shaped blade fabricated by the farm’s shop makes pushing massive amounts of feed a simple task. In the cross-ventilated barn alone, the equivalent of 65 miles of feed are moved every single day. No doubt, that amount of work results in some major wear and tear. The rubber-edged blade is replaced every couple of months.

With results that speak for themselves, Hardtke is convinced hourly feed pushups are an invaluable part of the management program for healthier, more productive cows at Kinnard Farms. “We’re not going back to every two hours,” he concludes. “We’re going to make this work, no matter what it takes.”

PHOTO 1: A skid steer with a custom-fabricated blade makes hourly passes up and down the feed alleys at Kinnard Farms, pushing the equivalent of 65 miles of feed each day in the 1,750-foot-long cross ventilated barn. Photo by Peggy Coffeen.

PHOTO 2: Shaun Hardtke, dairy operations manager at Kinnard Farms, initiated a more frequent feed pushup program a year-and-a-half ago. The changes in the barn have resulted in 4 more pounds of milk per cow harvested in the parlor. Photo provided by Kinnard Farms.

Agri-King believes capturing the nutritional value in feeds is the key to profit. With full nutrition programs, precise feed analysis, individualized rations and personalized on-farm service, Agri-King is committed to advancing the agricultural in...