Synergy Dairy creates the cows they love to milk

Peggy Coffeen
“Breeding cows we love to milk” is one of Jay and Heather Jauquet’s mantras at Synergy Dairy LLC, near Pulaski, Wisconsin, and with hand-picked genetics and astute management, they are doing just that.
Peggy Coffeen
Coffeen is a former editor and podcast host with Progressive Dairy.
Email Peggy Coffeen

Synergy Dairy came to be when the Jauquets decided to return to the way of life they each knew growing up. Heather and Jay had left their respective family farms to pursue an education at the University of Wisconsin-Madison, and then both worked in the A.I. industry for several years before answering the yearning to get back to their production-agriculture roots. 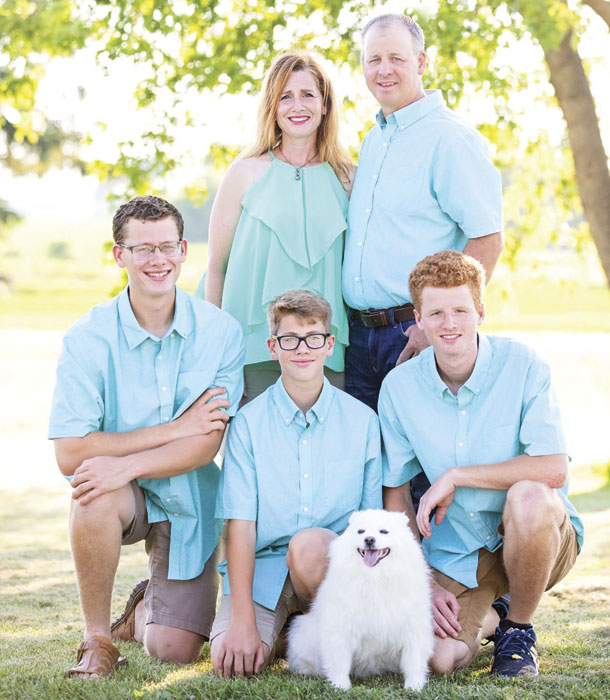 In 2004, the right opportunity came up to enter a 50-50 partnership with Heather’s parents, Gary and Linda Olson, and purchase a milking parlor and freestall barn facility with cows in it. The Olsons relocated their tiestall herd to the new site, and the Jauquets brought in a few head of cattle they owned and purchased heifers to reach the barn’s capacity of 178 cows. Together, the two couples focused on the future while never losing sight of their top priority: taking care of cows first.

“Our goals with Gary and Linda aligned because we all put the cows first,” Heather recalls.

The shared focus paid off, and an emphasis on cow comfort and cow-centered management got the herd up to speed. One of the most impactful changes made to the original freestall barn was converting from mattresses to deep sand bedding. In 2010, 100 stalls were added onto the barn and a manure pit was built. Heifer facilities were also constructed, allowing the dairy to raise all youngstock on-site from birth on up.

In 2017, Jay and Heather took on full ownership of the dairy and the following year added room for 300 cows with a tunnel-vented freestall barn with transition facilities. This barn includes a group calving pack, as well as two post-fresh pens: one for first-calf heifers and the other for second-lactation-and-older cows. Within these pens, the deep-bedded sand stalls are sized appropriately, at 48 inches for young cows and 50 inches for older cows.

Excellent nutrition from day one sets Synergy Dairy’s cattle up for a lifetime of success. Heather and her calf-raising team raise calves in hutches and feed whole pasteurized milk three times a day for 60 days, averaging 2.5 pounds of daily gain. This jump-start has heifers ready for breeding as early as 13 months. Once they hit the milking herd, cows receive a high-forage diet, including corn silage and haylage grown on their 500 acres. Jay credits BMR corn, shredlage and dry corn as critical ingredients in achieving high components.

In just 15 years’ time, Synergy Dairy has secured its position as a genetic leader among the Holstein breed. While known for creating chart-topping females and bulls, the breeding program is more than just a numbers game; cow performance speaks for itself. The dairy’s 550 cows rack up a rolling herd average of 31,662 pounds of milk, with an even more impressive slate of solids: 4.4% and 1,400 pounds of fat, and 3.3% and 1,035 pounds of protein.

Combined fat and protein yields 7.2 pounds per cow, per day, and coupled with outstanding milk quality, enhances the value of their product in a cheesemakers’ market.

“We think combined fat and protein is the number that drives our profitability more than any other number,” Heather says. “Our goal is to produce the milk our cheese plant wants.” The milk from Synergy Dairy goes for making high-end cheddar. The plant desires 4.2%-4.3% fat, and 3.2% protein. Jay calls those premiums their “saving grace.”

The double bonus of high production and components is no accident.

Jay personally does each individual mating on the farm with the goal of breeding sound, profitable cows. His disciplined approach has paid off by choosing bulls with positive traits for pounds of combined fat and protein, moderate stature, strength and width, reproductive efficiency, somatic cell count and good, strong udders.

Heather acknowledges the impact of Jay’s skill, adding, “We’ve been able to make a lot of genetics progress without a ton of investment in high-end heifers and cows.” Jay’s consistency and focus with genetic selection has produced the type of cows they love to milk.

“We don’t want cows milking 160 pounds a day with a 2.9 fat; we want 140 pounds with a 4.0,” Jay says. He describes their ideal cow as wide, strong and a little thicker through the thigh.

“They don’t get mastitis. Their repro efficiency and low somatic cell count is right up there with all the other things. They breed back and go through things easier,” Heather says, “and that’s important to us.”

Two cow families at Synergy Dairy exemplify these ideals. One of those is Glo-Crest Oman Pirate. Going back to the former world-milk-record holder Muranda Oscar Lucinda, Pirate brought everything to the table: calving ease, components, and good feet and legs. She had three Planet daughters, each successful in their own right. Planet Passion took on the type traits and soared toward the top of the CTPI list in 2012; her son, AltaParquet, is among Canada’s top LPI bulls.

Meanwhile, Planet Piper was cranking out extreme production, passing that trait down the line to her Tango daughters. One of the Tangos that is the dam of Synergy Delta Plymouth spent some time in 2019 as the number 20 GTPI cow of the breed and is currently the dairy’s top-producing two-year-old, generating a lot of embryo interest. 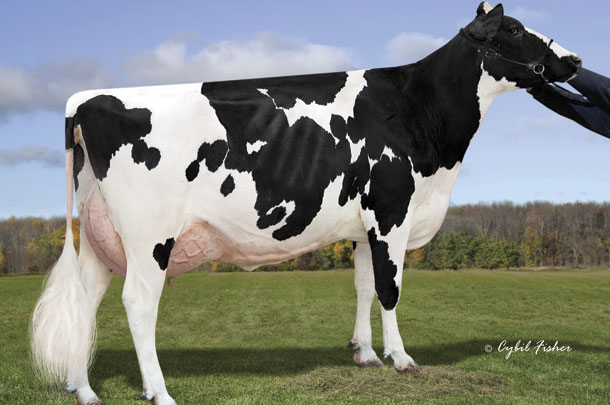 Another branch of the Piper family is Synergy Uno Pot O Gold. Her daughter, Synergy Rubicon Perfect, was high on the GTPI list and purchased by Progenesis as a calf. Eighteen of Perfect’s sons have entered Semex’s sampling program. Rounding out the trio of Pirate’s well-known Planet daughters, Planet Polka was sold and went on to produce several high-genomic daughters for the Russellway herd in Kentucky. Today, the highest-numbered cows and bulls from Synergy Dairy go back to Pirate, and her progeny alone comprises one-third of the herd.

“If the cows in the Pirate family were human beings, you would say they have a ‘passion’ for what they do,” Jay describes. “They are wide, strong, hard-working and they have attitude.”

The Jauquets’ other prolific cow family is that of Synergy Supersire Strategy, who was out of Man O Man. Not only did her offspring come through as genomically elite, but Jay and Heather quickly fell in love with her daughters in the milking herd.

“I call the Strategy daughters the ‘invisible cows’ – they milk hard, stay conditioned, breed right back and you don’t even know they are there until you see how much milk they are making,” Heather says. About a quarter of the herd goes back to Strategy.

Over the years, the Jauquets have utilized in vitro fertilization and flushing to propagate their elite genetics, propelling the genetic progress of their own herd while also opening up merchandising opportunities for both live cattle and embryos, domestically and internationally. About 90% of the semen Jay currently uses are genomic bulls out of proven sires. They genomically test the top quarter of the herd to identify the upper echelon for flushing.

A much smaller subset of the genetics niche at Synergy Dairy are a select few cow families bred for functionally correct type. Jay and Heather’s three sons, Mason (20), Carter (18) and Evan (16), along with Heather’s nieces and nephew, Carmen, Mikayla and Spencer Haack, take pride in exhibiting their homebred black and white and Red & White Holsteins and have had much success in doing so. In 2018, Synergy Jordy Spike-Red, a fall calf, was tapped reserve junior champion of the junior and open International Red & White Show. Also, Synergy Anaheim Magnolia-ET, a black and white cow, earned her own hardware on the colored shavings as a junior two in 2017 and again as a junior three-year-old in 2018.

Beyond showing cattle, the Jauquets all enjoy taking part in Holstein Association activities and serving as leaders in their dairy community. Heather is in her fourth year on the Wisconsin Holstein Association board of directors, and she also leads the Shawano County Junior Holstein program and coaches dairy quiz bowl. Locally, she spearheaded an all-breeds futurity show at the Shawano County Fair. Jay has been a county board member and shares his keen eye for cattle as a dairy judging coach. The three Jauquet boys excel in quiz bowl and judging activities, and Mason is currently on the state Junior Activities Committee.

At Synergy Dairy, there is a strong focus on family, whether that be working with cow families or the team of family members and employees that make it possible to achieve an outstanding herd of genetically elite, high-performing Holsteins. From the farm’s team of eight employees, including herdswoman Brittany Rabas, to the three boys and Gary, who still feeds cows every day, Jay and Heather are grateful for the people who are helping them achieve their dreams of making a living breeding, milking and marketing the kind of cows they love.

PHOTO 3: Synergy Delta Plymouth held her own as the number 20 GTPI cow in the breed last year. Going back to Glo-Crest Oman Pirate, she carries on the family tradition of high milk production and continues to generate embryo interest. Photos courtesy of Synergy Dairy.