Dave Natzke
U.S. dairy heifer exports are ending 2019 stronger and are poised to retain that strength into early 2020. However, on-farm management practices that emphasize use of beef semen and culling of low-genomic heifers could impact exports longer term.
Dave Natzke

November exports of U.S. dairy replacement heifers softened after hitting a 12-month high in October, according to latest estimates from USDA’s Foreign Agricultural Service. Monthly exports totaled 1,986 head, which was still the third-highest monthly total for the year.

According to the USDA, all the exports remained close to home, with 1,590 moving to Mexico and the remaining 394 head relocating to Canada (Table 1). November’s sales pushed year-to-date dairy heifer exports to about 16,550 head, still the lowest 11-month total in three years. 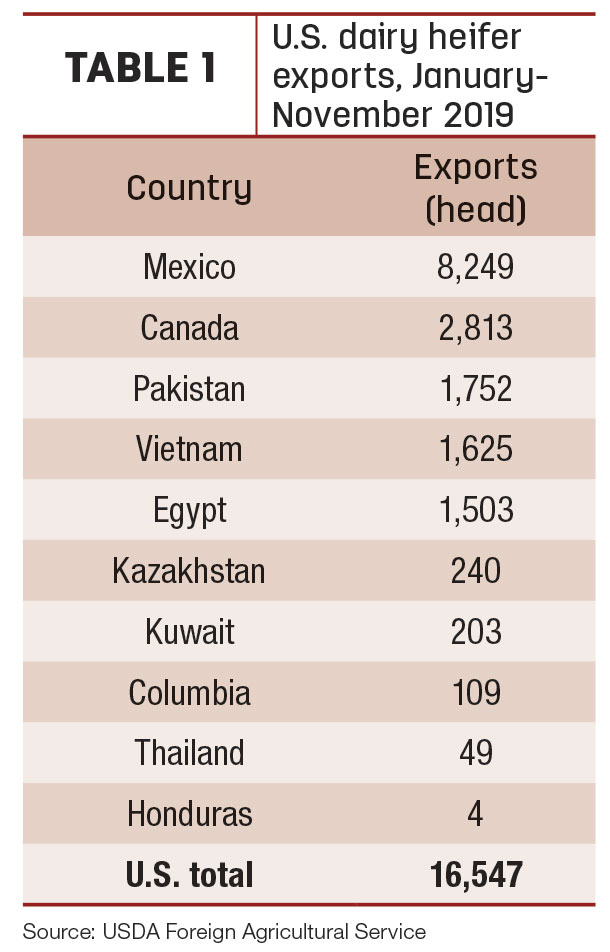 November dairy heifer exports were valued at about $2.9 million, raising the year-to-date total to about $29.6 million.

“The year of 2020 will start with multiple shipments of cattle off the West Coast to Vietnam,” Clayton said. In total, more than 3,000 head of Holstein heifers are bound for Southeast Asia in January and February.

Egypt will also see another shipment in January, bringing numbers exported there to well over 5,000 head in a three-month period.

“On the horizon, the numbers of cattle available for export will be limited because of the use of beef semen in dairy cows,” Clayton said. “Because of this, we will see export numbers fall off at some point.”

“Genomic testing has allowed U.S. dairy producers to sort and cull heifers from their herd at an earlier age, and lower milk prices accelerated that practice," Quaassdorff said. The increased use of beef semen in average-quality genomic-tested heifers has reduced overall dairy heifer numbers available for export.

The impact of those factors goes beyond heifer numbers and could lead to a structural change in the export market – a trend toward smaller but more frequent export shipments of heifers.

“With earlier sorting, it will be more difficult to find bred dairy heifers with dairy semen at short notice,” Quaassdorff said. And while open heifers should remain readily available, shipment sizes and timetables could be impacted.

For buyers, the good news is the supply of U.S. dairy heifers is and will continue to be plentiful due to the use of sexed semen and in vitro fertilization embryos.

From a demand standpoint, Quaassdorff expects continued interest in U.S. dairy cattle. “In several instances, it will depend on the importing country’s economic status and on how U.S. exporters deal with higher transportation costs,” he said.