Tom Vilsack
What country leads the world in cheese exports and has received international recognition for high quality? The answer, of course, is the United States.
Tom Vilsack

With funding from the dairy checkoff, the U.S. Dairy Export Council (USDEC ) has launched a global strategy designed to convey that answer to the world. The initiative employs multiple tactics in critical markets to lift the perception and reputation of U.S. cheese, leading to an increase in cheese exports. 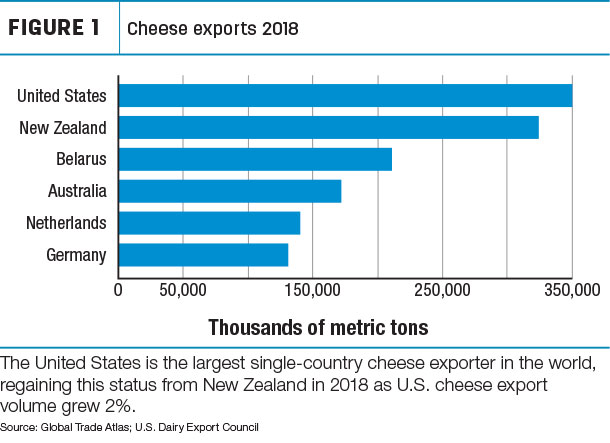 The United States overtook New Zealand in 2018 as the world’s largest cheese exporter by volume. At the World Cheese Awards in Norway last year, our cheeses won 89 medals – eight super gold, 25 gold, 24 silver and 32 bronze. Over the previous eight years, we won more medals than France and Italy.

Unfortunately, many global cheese consumers have high regard for French and Italian cheeses but don’t realize the United States makes cheese, much less award-winning cheese that beats the more-famous competition.

We heard this repeatedly from a dozen Middle East importers on a three-state specialty cheese trade mission of the United States organized this summer by the USDEC.

“I think U.S. cheeses are better than the French, Belgian and even the Italian cheeses,” said Jalal Thamer, whose trading company, Alholool Almulemah (English translation: “Inspiring Solutions”) headquarters in Riyadh, Saudi Arabia. He said he would bring artisan U.S. cheeses to high-end hotels and supermarket chains in his country to give them the attention they deserve.

One reason for our anonymity is that we are a leading exporter of commodity cheese, such as the cheese put on pizzas and hamburgers. People love our cheese without knowing we made it.

On the other hand, our global competitors from Europe have boasted for decades of their historical cheesemaking traditions, raising the profile of all their cheeses. They also have focused on consumer-packaged, retail varieties and specialty cheeses for high-end foodservice, sold at super premium prices. 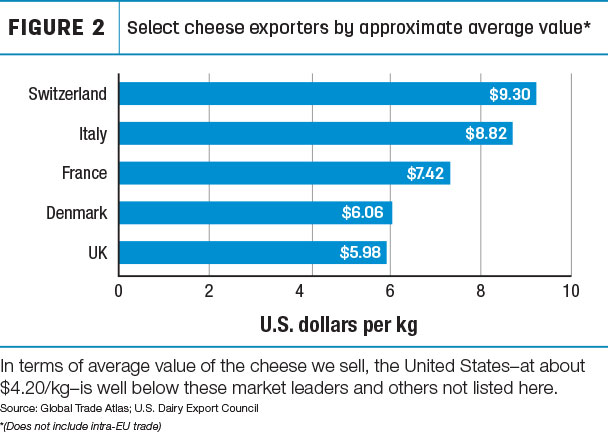 Cheeses exported from Italy sell for more than twice the average dollars per kilogram ($8.82) than what U.S. suppliers ($4.20) get.

USDEC is building awareness of the heritage of U.S. natural cheese in retail and foodservice channels, raising its portfolio among buyers, distributors, chefs, consumers and other end-users. All of this builds sales in the added-value, non-commodity end of the market.

In the Middle East, lack of market knowledge and uncertainty over logistics has deterred U.S. cheesemaker participation. To address that issue, we rolled out the Cheese Retail Program in the Gulf Cooperation Council (GCC) region – Bahrain, Kuwait, Oman, Qatar, Saudi Arabia and United Arab Emirates.

This year, USDEC expanded its Hong Kong retail and foodservice cheese programs and is beginning to roll out a retail cheese program (and extend the culinary education program) in Chile. USDEC relocated a staffer from the Brazil office to Santiago to ensure hands-on management.

The World Gourmet Summit, a month-long celebration of food and drink in Singapore, has been key to elevating the U.S. cheese profile in Southeast Asia. This is the second year USDEC served as the event’s official dairy partner through a partnership with Peter Knipp Holdings. We organized lectures, cooking contests, tastings, dinners and magazine features that raised the visibility of U.S. cheese.

“The Next 5%” is our industry goal to increase the volume of U.S. dairy exports from the equivalent of 15% of U.S. milk solids to 20%. To get there, we need to ship more cheese. U.S. cheese suppliers set a volume record in March 2019, selling 37,190 metric tons. Cheese exports in May were up 11%, and year-to-date volume was the highest in five years.

With strong support from dairy checkoff organizations – national and locally – we see positive signs that our cheese strategy is creating increasing global demand that should benefit our dairy farmers for years to come.

Tom Vilsack, a former U.S. Agriculture Secretary and governor of Iowa, is president and CEO of the U.S. Dairy Export Council, based in Arlington, Virginia.