The Dairy Together Road Show continues its trek across the U.S., seeking support for dairy policy changes providing both short-term relief and long-term structural changes.

Organized by the National Farmers Organization (NFO) and Wisconsin Farmers Union (WFU), program stops have been held in Wisconsin, New York, Vermont and Michigan. Remaining stops are set for April 16 in Greenwald, Minnesota; April 29 in Modesto, California; and May 2 in Clovis, New Mexico. Check the website for details and to RSVP.

WFU and NFO staff are uniting to present potential pathways forward for a national movement on dairy reform, focusing on production controls and efforts to reduce price volatility.

“The plans we’re presenting today move the industry away from consolidation and help level the playing field so independent farmers have a fighting chance,” WFU President Darin Von Ruden told a crowd of about 100 farmers gathered in Eau Claire, Wisconsin.

NFO’s Dick Levins, professor emeritus of ag economics at the University of Minnesota, called attention to the continuing loss of U.S. dairy farms. He noted that between 2000 and 2017, the U.S. lost 63,702 dairy farms with herds of 200 cows or less, a decrease of 65.6 percent. Meanwhile, operations with over 1,000 cows increased by 109 percent and those with over 2,000 cows by 268 percent.

“As those family-sized dairies leave, the particular benefits they provide to rural economies, the environment and food security go with them,” Levins said.

The NFO is proposing The Family Dairy Farm Relief Act, a voluntary program that would base emergency relief payments on different tiers that recognize variations in operating costs for different size farms. Monthly payments would be set according to a farm’s level of production, with smaller farms receiving relatively higher payments per hundredweight (cwt). The plan is modeled off of the Maine Dairy Relief Program, which was implemented in 2004 and has effectively slowed the loss of dairy farms in the state.

Levins stressed that the program would not impact milk prices and is intended to be a short-term bridge until a more market-oriented, long-term program – one not dependent on government payments – could be implemented. He added that the already existing model is one that could be easily and rapidly enacted by Congress.

Wilson cited analysis by dairy economists Chuck Nicholson, Cornell University, and Mark Stephenson, University of Wisconsin – Madison, on the impact this program might have had in current market conditions.

“The bottom line on what we found was generally pretty positive in terms of thinking of what these programs could do,” Nicholson said. “We saw reduced variation in prices and also some price enhancement, increased net farm operating incomes, reduction in the rate of farm exits across farms of all sizes and a reduction in government expenditures on dairy programs.” 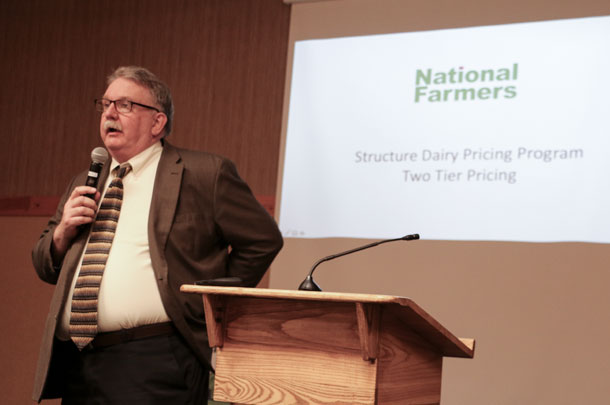 Through the DPSP, farmers who choose to expand beyond an allowable growth rate (based on market demand) must pay a market access fee. That fee would then be distributed among all the farmers who chose not to expand. Two versions of the plan are currently on the table – one that would operate continuously and another that would be triggered when the milk-feed ratio drops below a certain level.

“What we’re hearing from farmers is that they’d rather have a fair price from the market than a handout,” Wilson said.

The proposal would help reduce the cost of production difference between small and large farms in a way similar to Federal Milk Marketing Order (FMMO) procedures that account for different class prices, he noted.

“We have created a scenario where every dairy farmer has a positive margin,” Bylsma said. He also stressed that the Structured Dairy Pricing Program would not increase costs to consumers or impact the price a cheese processor or milk bottling company pays for their milk.

“We recognize that if we let these family farmers go out of business, we won’t get them back,” Bylsma added. “Our proposal makes rural communities stronger and helps keep this treasure we call the family farm in business.”

“We know that to get anything changed at the federal level, we’re going to need people power,” said WFU special projects director Sarah Lloyd. “It’s very encouraging that we’re packing the rooms for these meetings – now we need to spread the word to our elected decisionmakers, implement our people power through our co-ops and get everybody on board – processors, veterinarians, seed sales representatives. These proposals are strong enough to make a difference and move the industry away from consolidation.”