Dave Natzke
U.S. dairy exports reached record-high levels in 2018 but volumes slumped in the final months of the year, according to a monthly summary from the U.S. Dairy Export Council (USDEC). Exports were down 11 percent in the fourth quarter after posting a 16 percent increase in the first three quarters.
Dave Natzke

• Volume basis: Suppliers shipped 152,952 tons of milk powders, cheese, butterfat, whey products and lactose in December, the lowest figure in nearly two years and down 21 percent from December 2017. Despite the fourth-quarter weakness, total 2018 volumes were up 9 percent compared to 2017.

• Value basis: Total U.S. exports were worth $428.9 million in December 2018, down 9 percent from December 2017. For the year, dairy exports totaled $5.59 billion, 2 percent more than 2017. On a value basis, sales to China were down 40 percent in December, while sales to Southeast Asia were down 27 percent. This was only partially offset by a 17 percent increase in sales to Mexico. 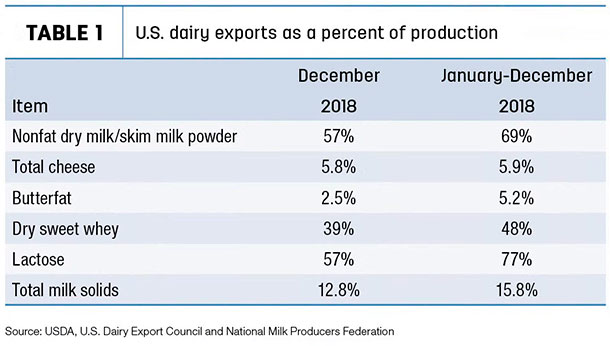 December 2018 U.S. dairy replacement heifer exports rebounded from November, setting the stage for a stronger 2019. The month’s shipments were estimated at about 2,484 head valued at nearly $4.86 million.

Heifer-buying interest remains strong in Mexico, according to Tony Clayton, Clayton Agri-Marketing Inc., Jefferson City, Missouri. Buyers are visiting the U.S. and selecting cattle, and export pens at the U.S.-Mexico border have to be booked 16 to 18 days ahead of time.

International demand for U.S. dairy genetics continues to expand. The National Association of Animal Breeders (NAAB) reported a new record for dairy semen exports in 2018, helping offset some of the declines in the domestic market. Just over 24.5 million units of dairy semen were exported in 2018, representing an increase of 2.5 million units (11.4 percent) over 2017.

China back in the alfalfa market

The U.S. access to the hay export market in China is becoming more settled now that the threat of additional retaliatory tariffs has been diminished. As a result, China is coming back to the U.S. for alfalfa hay, according to Christy Mastin with Eckenberg Farms Inc., Mattawa, Washington.

China was the top destination for U.S. alfalfa hay in December at 65,693 MT, the highest volume since August. Total shipments to China were estimated at 877,960 MT.

2018 export sales of alfalfa cubes and alfalfa meal were down from the year before.

December 2018 U.S. agricultural exports were estimated at $11.3 billion, down $900 million from November. Imports were valued at $10.7 billion, yielding a December 2018 trade surplus of $597 million, the smallest monthly surplus since January.