Weekly Digest: Cows not so dry

Cows not so dry

The estimate of U.S. dairy cows located in “drought areas” continued to shrink, according to the USDA’s World Agricultural Outlook Board. Just 6 percent of the nation’s milk cows were located in areas experiencing drought at the start of February (see Figure 1), a 12 percent reduction compared to a month earlier. 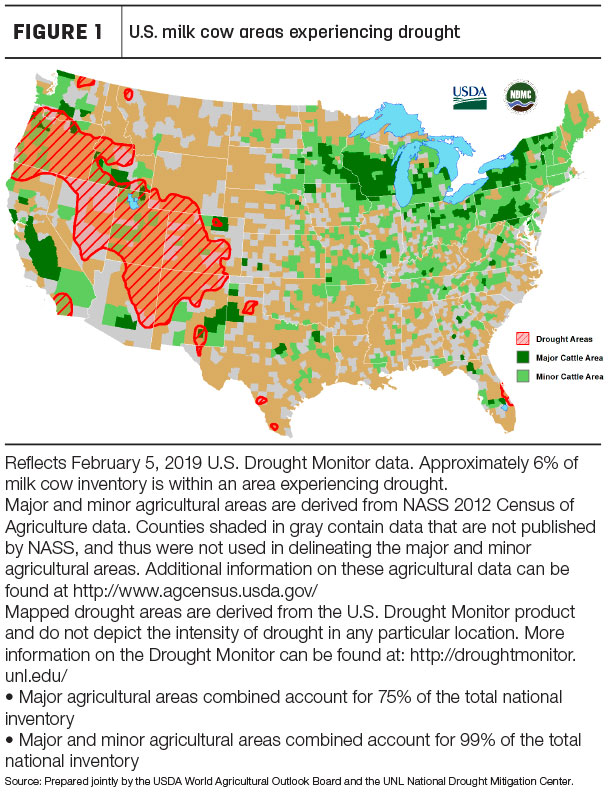 Thanks to January precipitation, areas of drought all but disappeared in California and declined in Washington and Florida; conditions remained dry in Oregon.

The weekly U.S. Drought Monitor overlays areas experiencing drought with maps of major production areas for hay, alfalfa hay, corn, soybeans and other crops, as well as primary dairy and all cattle areas.

The report also showed about 13 percent of major alfalfa hay production areas were in areas experiencing drought, the lowest level since late spring 2017.

Farmers exiting dairy at an accelerated rate isn’t just happening in the U.S. Dairy farm numbers in Wales and England declined by 106 in January 2019, the highest monthly total since March 2007, according to AHDB Dairy, a division of the Agriculture and Horticulture Development Board. As of Feb. 1, there were 9,064 dairy farms remaining in Wales and England.

The FAO Dairy Price Index includes global average prices for butter, cheese, skim milk (SMP) and whole milk powders (WMP). The January 2019 index jumped more than 7 percent from December 2018, ending a string of seven straight months of declines. Even with the sharp increase, dairy product prices remain only slightly above a year ago.

All dairy products represented in the index registered higher prices in January, led by a 16.5 percent jump for SMP. The sharp increase resulted from limited export supplies from Europe and expectations of a seasonal tightening of export availability from Oceania in the coming months.

The FAO Food Price Index is a measure of the monthly change in international prices of a basket of five food commodities – cereal, vegetable oil, dairy, meat and sugar. Despite January’s 1.8 percent increase in the overall index, it is still about 2 percent less than a year earlier.

The deadline for the first of two USDA bid solicitations for fluid milk as part of the Trade Mitigation Program (TMP) is Feb. 15. The first solicitation covers up to 5.49 million gallons of fluid milk products (whole, reduced-fat, low-fat and fat-free milk) in gallon containers for delivery to food banks, April through June 2019.

A second and final solicitation will occur in April for delivery of milk July through September 2019.

Announced last August, TMP is designed to aid segments of U.S. agriculture hurt by trade wars and retaliatory tariffs. The USDA previously announced it would purchase almost $85 million in dairy products under the TMP’s Food Purchase and Distribution Program.

The New York Farm Bureau (NYFB) argued the dismissal of a lawsuit seeking collective bargaining rights for the state’s farm workers should be upheld. Attorney Brian Butler, of Bond Schoeneck and King, presented arguments before the Supreme Court Appellate Division in Albany, New York, on Feb. 11.

The original lawsuit, filed in 2016, sought to lift a provision in the State Employment Relations Act (SERA) that excluded the state’s farmworkers from the right to organize, saying the provision was unconstitutional. It alleged a worker, employed on a New York dairy farm from April 2012 until September 2015, was fired after he and another employee discussed workplace conditions with other co-workers and labor organizers.

NYFB was granted intervenor status in that lawsuit after New York Gov. Andrew and the state’s attorney general office said they would not defend the law. In January 2018, New York State Supreme Court Judge Richard McNally granted NYFB’s request to dismiss the lawsuit.

NYFB has argued farm workers should not have collective bargaining rights due to the unique nature of agricultural production. With planting and harvest impacted by weather and seasons, and the need for around-the-clock livestock care, work stoppages could adversely impact animal health and jeopardize a season’s worth of work.

While farmers greatly value the work of their employees, additional labor regulations and higher business costs in a weak agricultural economy will push more farms out of business and reduce the number of jobs, on the farm and off, said David Fisher, NYFB president.

Scott Youse, Maryland Agriculture Council president and a Ridgely, Maryland, dairy farmer, said the number of dairy farms in Maryland stands at 364, down from 417 in 2017. Youse urged state’s legislators to fund the Maryland Dairy Emergency Trust Fund, created in 2007 but never given any state money to operate.

Posted to the Federal Register on Feb. 6, the proposal would allow drivers who complete fatigue management training and maintain satisfactory safety records and documentation to extend daily driving hours.

The petition and other background, as well as information about how to submit your comment, is available on the LMA website.