Nancy Whitehouse
For the past 20 years or more, emphasis has been placed on balancing diets for amino acids (AA) either by feeding rumen-protected amino acids (RPAA), especially methionine (Met) and lysine (Lys), or by combining feed ingredients to balance AA profiles.
Nancy Whitehouse

There are studies that show balancing for AA improves nutritional aspects of lactating dairy cows, resulting in increased milk, protein and fat production, but these studies also focus on the functional aspect such as health, especially in the peripartum period. The following three studies take a look at both aspects.

Analysis through the NRC model revealed that the Lys-Met ratio was 3.7-to-1, indicating a surplus of Lys and a deficiency of Met. Additionally, the diet was adequate in energy, but with crude protein (CP) at 18.1 percent, rumen-degraded protein (RDP) and rumen-undegraded protein (RUP) was in excess. This told Schwab that protein, the most expensive part of the diet, was being overfed and not utilized by the cows. So he met with the farm feed suppliers and nutrition consultant to see what other ingredients were available to use in a new diet.

The new diet removed expeller soybean meal and the soybean meal was decreased. In place of those ingredients was canola meal and a blood-feather meal blend that contained a rumen-protected Met supplement. The output from the NRC model had the Lys-Met ratio at 3-to-1, which is considered to be the ideal ratio in NRC. The diet was still adequate in energy, but the CP of the diet was reduced to 17.2 percent with both the RDP and RUP decreasing.

On paper, this diet seemed to be a better diet than the previous diet; however, the data collected would tell if it truly was. Tracking of milk components on 75 cows was done through Dairy Herd Improvement records. Data was collected 11 weeks before the switch to the new diet and 11 weeks after the switch of the diet. True protein percentages went from 2.82 percent to 3.14 percent, and milkfat went from 3.32 to 3.78 percent. 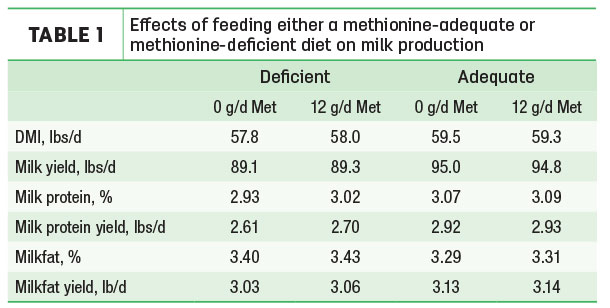 The milk urea nitrogen (MUN) levels decreased from 14.5 to 12.5 milligrams per deciliter (mg/dL), indicating more protein utilized by the cows for milk and milk components. No milk yield effects were seen, but since most of the cows were 100 days in milk (DIM) at the start of the trial and 254 DIM when the trial ended, milk yield was naturally decreasing as the trial was conducted.

As an example of some of the potential functional benefits of AA supplementation, observations from the barn staff and the veterinarian were that by week 10 of the switch, the cows seemed healthier. There were less feet and leg problems, and for the cows that calved in on the new diet, there were comparatively less incidences of clinical ketosis and fewer services per conception. At the end of 11 weeks, the data collected showed that the new diet was a better diet.

Ryan Ordway, a Ph.D. student at the University of New Hampshire in 2004, conducted a trial to determine the effects different forms of Met supplements had on milk production responses in cows fed either a Met-adequate or a Met-deficient diet. Forty multiparous mid-lactation Holstein cows were used in a replicated, randomized, complete block split plot 5-by-5 Latin square design with a 2-by-2-by-5 factorial arrangement of treatments. 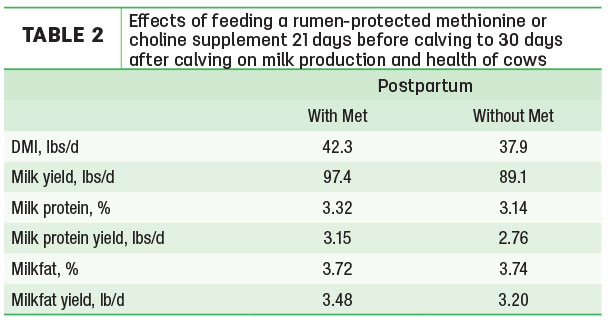 Main effects were Met-deficient or Met-adequate diet, form of rumen-protected Met and five levels of supplemental Met (0, 3, 6, 9 or 12 grams per day). The diets were formulated to be adequate in energy, with the adequate diet having a Lys-Met ratio of 3-to-1, and the deficient diet had a ratio of 3.73-to-1. In this diet, blood meal was fed to make sure Lys and histidine (His) were adequate.

Zheng Zhou, a Ph.D. student from the University of Illinois in 2015, conducted a trial to see the effects of feeding a rumen-protected Met or choline (Chol) supplement 21 days before calving to 30 days after calving on the production and health of cows. Eighty-eight multiparous cows were used in a randomized, complete, unbalanced block design with a 2-by-2 factorial arrangement of Met and Chol. Treatments were control (no Met or Chol), control + Met, control + Chol, and control + Met + Chol. For this discussion, I am only going to present the Met data.

The study showed that with Met supplementation, there was a greater DMI in both the peripartum (31.5 pounds per day with Met versus 29.1 pounds per day for the control) and postpartum periods, which could explain the higher milk production. There were also increases in milk protein percentages and yield, and fat yield when cows were supplemented with Met.

It was also noted that there was a tendency for lower incidence of ketosis (3 Met versus 8 control) and retained placenta (2 Met versus 4 control) when cows were supplemented with Met during the peripartum period. The liver and blood biomarkers showed a favorable change in liver function, inflammation status and immune response of cows receiving the Met supplementation. This all indicates cows supplemented with Met in the transition period made a smoother transition into pregnancy.

Balancing diets for AA has been shown to improve the production of lactating dairy cows while decreasing the amount of CP in the ration. A growing body of literature supports beneficial functional effects as well.

Nancy Whitehouse is with the research faculty and the University of New Hampshire.