Triticale has become very popular with dairy producers managing cropping systems throughout much of the U.S. In most cropping systems, triticale functions as a winter-annual forage that includes fall establishment after the removal of corn silage or soybeans followed by a harvest of silage the following spring or early summer.

Reasons for this trend are partly environmental in nature, and incorporate specific needs to capture nitrogen (N) and other nutrients from land-applied manure, and also to improve land stewardship by providing winter ground cover.

Historically, the boot and soft-dough stages of growth are often discussed as targets for the harvest of most cereal-grain forages. Normally, a soft-dough-stage harvest will maximize dry matter (DM) yield but, depending on location, may obligate a time delay long enough to prohibit establishment of a corn or soybean double crop.

For example, in central Wisconsin, triticale will typically reach the soft-dough stage of growth about July 1, which effectively prohibits subsequent crops of corn or soybeans during the same growing season. In contrast, a boot-stage harvest in the same location usually occurs about Memorial Day, thereby permitting numerous double-cropping options.

Unfortunately, recent experiments (2016) conducted by USDA-ARS and University of Wisconsin scientists at the University of Wisconsin Marshfield Agricultural Research Station suggest there can be about a 70 percent yield penalty associated with an earlier (boot-stage) harvest management decision (11,300 versus 3,400 pounds DM per acre).

While this yield differential is severe, any informed management decision related to harvest timing also must include a consideration of nutritive value as well as a working understanding of how the nutritive value of triticale forages are affected by plant maturity.

Figure 1 relates the portion of forage DM comprised of structural plant fiber (NDF) to growth stage. Through anthesis (flowering), the concentration of NDF increases with plant maturity in a fairly predictable pattern consistent across most forage grasses. 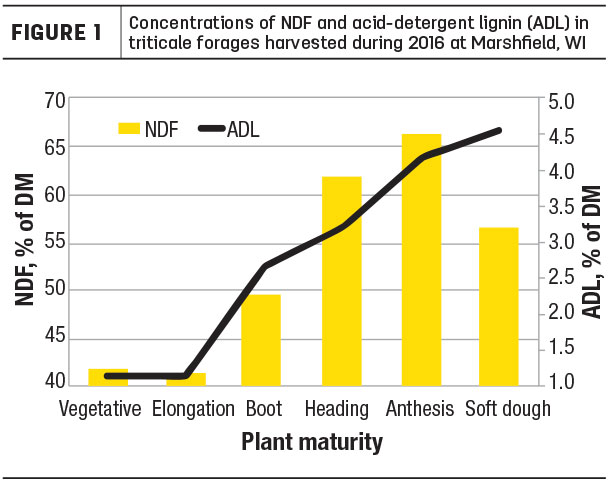 For our triticale harvested during 2016, this included a 25 percentage unit increase in NDF between the stem elongation and anthesis stages of growth. However, unlike many perennial forages, concentrations of NDF declined sharply between anthesis (66.3 percent) and soft-dough (56.5 percent) as triticale forages partitioned nonstructural carbohydrate into a large filling seedhead.

Two key points should be emphasized: Dilution of NDF occurs for all cereal-grain forages during grain fill, and this response will vary with species, cultivar, year, growing conditions, etc. For our study, variability was evident the following year (2017), when dilution by grain fill reduced NDF by only 1.6 percentage units (61.1 versus 59.5 percent) between the anthesis and soft-dough stages of growth in forages harvested from similarly managed plots.

While this dilution effect reduced the overall concentration of NDF, it also can have significant implications with respect to both DM digestibility and energy density of the forage.

Lignin is another component of the cell wall and can be viewed as the reinforcement rod within plants that allows them to remain erect, particularly important for a grain crop with a disproportionate percentage of total plant weight associated with the seedhead. Unfortunately, lignin also is indigestible and serves as a major impediment to ruminal digestion.

As might be expected, lignin also increases with plant maturity (Figure 1). However, the dilution effect created by grain fill described previously for NDF was not enough to offset increases in lignin throughout the other portions of the plant (stem, leaf sheath and leaf blade), some of which provide primary structural support for the filling grain head. For the dataset described in Figure 1, this concept can be visualized from the percentage of NDF comprised by lignin, which increased from 2.8 percent of NDF during stem elongation to 8 percent of NDF at the soft-dough stage of growth.

Figure 2 illustrates the effects of the competing processes of plant maturity/lignification versus grain fill on (48-hour) in vitro digestion of triticale forages in buffered rumen fluid. 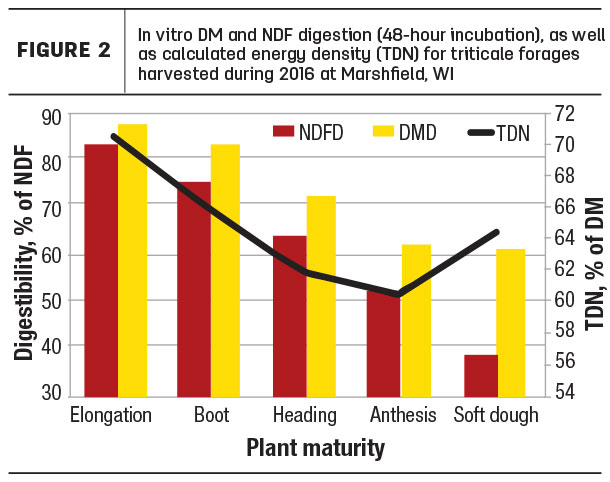 Digestibility of both DM and NDF (NDFd) declined in parallel responses with plant maturation through the anthesis stage of growth but diverged sharply by the soft-dough stage. This occurred because DM digestibility is stabilized or improved relative to plant maturity by grain fill.

The nonstructural carbohydrates involved in grain fill are not part of structural plant fiber (NDF). As a result, NDFd is not affected by the physiological process of grain fill and continues to decline with plant maturity, reaching a low of 38.6 percent of NDF at soft dough, which is about half of that at boot stage (75.1 percent of NDF).

These factors also affect any calculation of energy density (Figure 2), which benefits positively from high NDFd at boot stage but also from grain fill at soft dough. The poorest calculated energy density occurs at anthesis, which should be a suitable harvest target for livestock with lower energy requirements, such as pregnant dairy heifers. Any nutritional benefit with respect to energy density or DM digestibility derived by delaying harvest is associated entirely with grain fill and not with the leaf and stem structure supporting the seedhead.

NDFd is increased by residence time in the rumen, and various in-vitro incubation times have been used to best simulate or mimic ruminal residence times for various livestock classes. A 48-hour incubation is most appropriate for dairy heifer or beef cattle applications, in which voluntary intakes are lower and rates of passage are slower. Shorter incubation times are most relevant for lactating dairy cows.

The effects of incubation time (24, 30 or 48 hours) on NDFd for our triticale forages are shown in Figure 3, where NDFd increased with incubation time, regardless of plant growth stage at harvest. 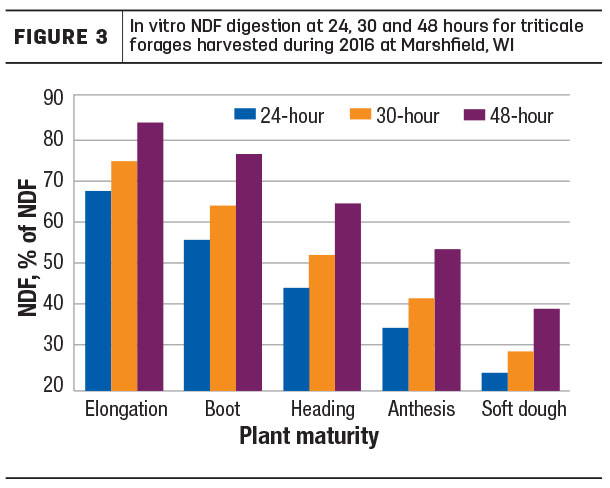 Relative differences in NDFd between incubation times tended to remain consistent across growth stages, creating what are essentially parallel responses to plant maturity.

The nutritional characteristics of triticale forages are heavily influenced by competing processes of normal plant maturation juxtaposed against grain fill. In vitro determinations of NDFd are not influenced by grain fill, but DM digestibility and energy density are either stabilized or improved by this process. However, any nutritional benefit derived by delaying harvest to take advantage of grain fill is associated entirely with grain fill and not with leaf and stem structures of the plant.

As such, DM digestibility and calculated energy densities of triticale forages harvested at boot stage reflect lower concentrations of structural fiber and lignin, and much greater NDFd than delayed harvests at the soft-dough stage of growth.

A fairly severe yield reduction (about 70 percent) also can be expected with a boot-stage harvest compared to soft dough. Despite the yield benefits associated with a delayed harvest, harvest management decisions for lactating cows will likely still favor a boot-stage harvest because of superior nutritional characteristics, a need to promptly plant a double crop of corn or soybeans, or both.

PHOTO: Despite the yield hit, triticale harvested at boot stage offers superior nutrition for lactating cows and an opportunity to double-crop. Photo by Lynn Jaynes.