Genetic diversity of the Jersey breed

Brad Heins
There has been a lot of chatter lately about inbreeding within the Holstein breed. Early estimates of average inbreeding for Holstein females born in 2021 is 9.1% with an average yearly increase of 0.3% to 0.4% per year.
Brad Heins

The average inbreeding has surpassed the recommended inbreeding coefficient of 6.25% that minimizes the negative consequences to fertility, health and mortality. Inbreeding occurs when closely related sires and dams are mated and there is an increase in the probability that the two genes at the same locus on the chromosome are identical by descent. An increase of homozygous genotypes and a decrease of heterozygous genotypes may lead to higher frequency of harmful recessive alleles and animals are subjected to inbreeding depression.

Jerseys represent the second-largest breed in the U.S. and still see tremendous growth for commercial milk production. Recent research had indicated that all North American Jersey bulls can be traced back to two Jersey bulls, Secret Signal Observer (born 1953) and Advancer Sleeping Jester (born 1951). Two of Observer’s sons, Observer Chocolate Soldier and S.S. Quicksilver of Fallneva (both born in the 1960s) have a relationship of 14.4% and 12.8%, respectively. Quicksilver is found in lineage of Highland Magic Duncan, and Chocolate Soldier is found in Mason Boomer Sooner Berretta and his sire Soldierboy Boomer Sooner of CJF, to name a few great Jersey bulls.

Jester is found in Q Impuls (born 1989), Meadow Lawn J Imperial and Vaucluse Sleeping Surville. Enough of the reminiscing about popular Jersey bulls of yesteryear. There is not much talk about inbreeding in the Jersey breed and what the solution may be to minimize the increase in inbreeding within Jerseys. 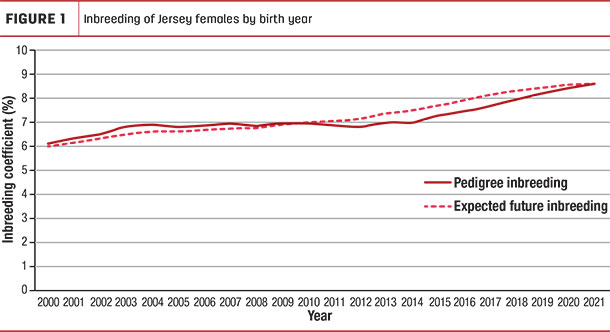 Inbreeding plateaued from 2003 to 2014, and this could be due to a few factors, one being that Oomsdale Gordo Goldie Gratitude was found to have 20% red-carrier Holstein genes in her pedigree. Some of her sons (Gannon and Garden) were used heavily in the Jersey breed. This “leveling-off” of average inbreeding could also be due to the Danish Jersey influence of Lemvig and Impuls. Although, Lemvig is sired by Highland Duncan Lester, who has a high relationship to the Jersey breed despite being born in 1985. However, from 2014 to 2021, we saw an accelerated increase in average inbreeding. The average increase is +0.23 per year, and estimates from 2021 have the average inbreeding level of Jersey females at 8.64%. This is well above the 6.25% threshold to minimize the effects of inbreeding depression that include loss of fertility and increased genetic defects. The average increase in inbreeding is currently slower than that of Holsteins (+0.4%); however, pedigree inbreeding level of females is very close to Holstein (9.1%). At the continued rate of increase, inbreeding level of Jerseys should be 10% within five years.

A new genetic defect has been discovered in the Jersey breed [neuropathy with splayed forelimbs (JNS)], which carries a frequency of 8.2%. Currently, Chrome and Listowel-P are carriers of JNS and have probably increased its frequency with heavy use. When I was in graduate school, I personally had a Jersey calf born in July 2008 that displayed this condition; however, we thought that it might have been limber legs. I worked with the American Jersey Cattle Association (AJCA) to get the calf genomically tested and recently discovered that this calf was one of 16 calves that helped discover this new genetic defect.

Highland Magic Duncan still has enormous influence on the Jersey breed. His current relationship to Jerseys is 20.4%. Many of the top Jersey bulls we all know have had great influence on the Jersey breed and highly related to Jersey cows and include the likes of Berretta, Lester, Action, Paramount, Valentino. Some might say that there has to be outcross genetics in the Jersey breed. Well, maybe, maybe not. The Council on Dairy Cattle Breeding publishes a list of high-genetic-merit Jersey bulls with low relationship to the breed. Of the top 20 bulls, seven are Danish Jersey bulls and 13 are JX bulls. We can debate the merit of Danish Jersey and JX bulls another time. However, the Danish Jerseys are great commercial cows that are moderately sized with high fat and protein and excellent fertility. I’ve seen them in their homeland, and they would fit well for commercial milk production in the U.S.