Jonas de Souza
Writing any economic analysis or market direction is always complicated, since it constantly changes. However, it is safe to say that fat supplement prices are at the highest level ever.
Jonas de Souza

The constant increase in prices is associated with the increased demand for oils, the spike in demand for renewable fuels, the difficulty of harvesting palm in southeastern Asia and the four- to fivefold increase in shipping cost. For example, Figure 1 shows the variation in price of palm fatty acids distillate (PFAD), a common raw material used to manufacture fat supplements. Prices of PFAD raw materials doubled within a year. 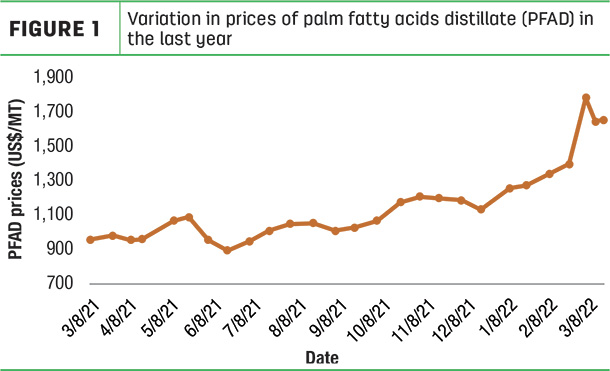 Fat supplements in the feeding program

When we evaluate the importance of supplemental fat in diets, we need to consider the main goal we are trying to achieve when using it. Then, understanding that different fatty acids (FAs) have different metabolic functions and are used differently in the body. To illustrate, Figure 2 represents an overall theoretical partition of FAs when provided in the diet. 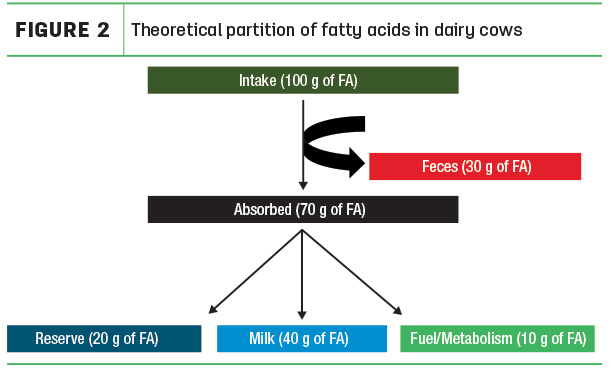 First, it is vital to account for differences in digestibility across supplements. On average, fat supplements have a digestibility of around 70%. However, several factors influence FA digestibility such as the FA profile, degree of purity of a supplement, presence of triglycerides and physical form. The importance of digestibility is being considered in the new NASEM 2021 publication, where 11 coefficients of FA digestibility are assigned to different classes of ingredients/supplements. Then, depending on the FA and the animal’s physiological conditions, FAs can be partitioned to milk (milk yield or milkfat), body reserves or utilized by other tissues as an energy source/structure/metabolic component. Therefore, to value a fat supplement, we need to consider more than the tangible factors we measure daily in the tank.

One of the main reasons nutritionists consider using fat supplements is to improve butterfat. Butterfat prices have been increasing in the last few months at the time of this writing and will likely be over $3 per pound over the next six months. As a result, there is a growing interest in fat supplements that will support milkfat yield. Considerable attention has been given to palmitic acid (C16:0) supplements because of their potential to increase milkfat concentration and yield, and the efficiency of milk production compared with nonfat diets and other options of FA supplements.

The feeding level of C16:0 is important to determine the response to supplemental fat. Most feeding studies were conducted using 1.5% to 2% C16:0 in the diet. However, a few dose-response studies indicated that C16:0 milkfat response is not linear. The results from a trial illustrate the dose-response effect (Table 1). 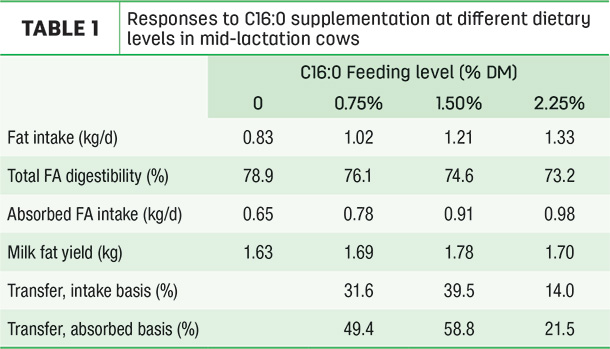 We calculated transfer efficiency (milkfat response/additional supplemental fat) on an intake and digestible basis. Interestingly, transfer efficiency decreases when C16:0 is fed over 1.5% of the diet. Additional C16:0 may be efficiently used at lower levels to drive milkfat synthesis, but at a higher level would cause “substitution” and decrease de novo synthesis. Given the projected fat prices, one should consider feeding C16:0 at 1% of the diet to take advantage of better efficiency. 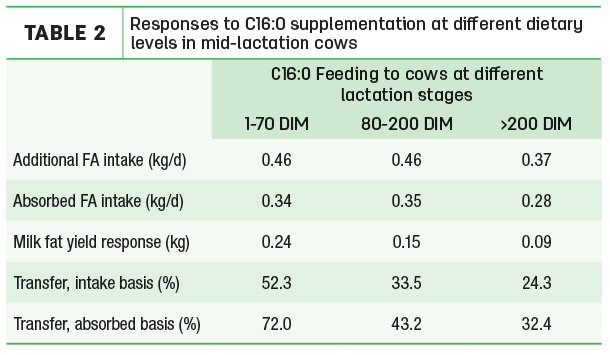 A recent meta-analysis of 17 studies reported a 27% increase in pregnancy rate in the first postpartum artificial insemination (A.I.) when dairy cows were fed fat supplements during the transition period. The inclusion of the very long-chain omega-3 FA EPA and DHA in the form of fish meal, fish oil or algae in the diet has been shown to improve either first-service or overall pregnancy in six studies. Also, a recently conducted study demonstrated that supplementation with calcium (Ca) salts enriched in fish oil-derived FAs starting at 30 days in milk (DIM) improved pregnancy rate compared with Ca salts of palm FAs (52.8% versus 45.5%). Therefore, polyunsaturated long-chain FAs including omega-6 and omega-3 seem to be more effective at improving pregnancy in dairy cows than those containing mainly palmitic and oleic acids.