A dairy manager’s guide to ketosis

Ryan Pralle
A dairy manager’s ability to walk a pen of cows and notice those that need a closer look or additional support is an invaluable asset. This cow sense has always been the staple of a well-managed dairy herd that optimizes cow health and performance, as well as farm profitability.
Ryan Pralle

However, as the science of dairying has advanced, we’ve come to find that there are often issues invisible to the eye that have a major impact in our herds.

Subclinical ketosis is a common metabolic disorder that occurs in early lactation cows. It has received a tremendous amount of attention in the past decade because it is a “silent killer” of dairy cow profitability. Intensive epidemiology studies suggest that 34% to 53% of dairy cows have subclinical ketosis after freshening. Subclinically ketotic cows have greater risks for displaced abomasum and other illnesses, are more likely to be culled or die, typically produce less milk and are less likely to breed back. Budget models estimating the total cost per case of ketosis based on these consequences suggest a loss of $375 for first-lactation cows and $256 for multiparous cows. 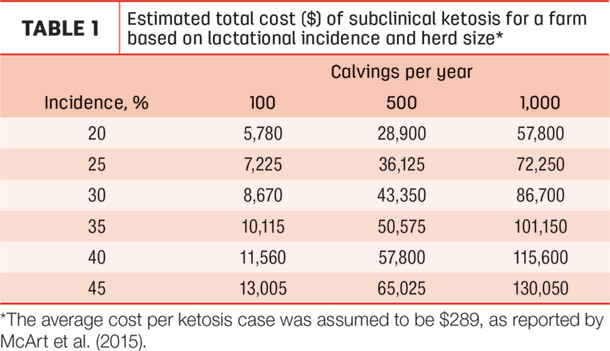 To take our metabolic health management and dairy profitability to the next level, let’s summarize the need-to-know information about ketosis.

Ketosis is a metabolic state when a cow has greater-than-normal concentrations of ketone bodies in body fluids like blood, urine and milk. It can present with clinical symptoms like fruity breath odor, low appetite, a drop in daily milk yield or excessive weight loss; however, ketosis cases are predominately subclinical, with no obvious signs or symptoms. That is why ketosis is most reliably diagnosed with cowside tools that measure ketone bodies. Measuring blood β-hydroxybutyrate (BHBA) is considered the standard method because of the widespread availability of electronic handheld meters that give a precise numerical BHBA concentration. Cows with blood BHBA concentrations greater than or equal to 1.2 millimoles per liter are considered subclinically ketotic. Other cowside methods typically use an indicator strip or powder that is saturated in urine or milk to cause the test to change color based on ketone body concentration of the sample. These methods are less accurate but are more convenient than drawing blood.

Cows are at the greatest risk for ketosis in the first three weeks post-calving, with most cases occurring in the first 10 days in milk (DIM). This large DIM interval and the subclinical nature of ketosis makes testing cows multiple times important for catching cases. However, time, labor and facility restraints often make that challenging. If possible, it is recommended to test cows twice in the first two weeks of lactation. To do this, you can test cows based on set DIM (i.e., on five and nine DIM) or test a range of DIM on specific days of the week. For example, you could test cows three to 10 DIM on Mondays and Thursdays or test cows three to 16 DIM on Tuesdays.

The main nutritional challenge putting fresh cows at risk of ketosis is negative energy and nutrient balance. As they transition from the dry period, cow energy requirements triple due to the demands of lactation. However, cow feed intake is typically reduced at calving and lags behind the tremendous increase in energy demand. This deficit between energy in from feed intake versus energy out to milk (and maintenance) is the negative balance. To support lactation, the cow is going to salvage energy and nutrients from her own body to make up the deficit. The main source of body energy is the adipose, or fat, tissue.

Adipose tissue has a reserve of energy-dense triglycerides, the hallmark fat molecule, that the cow will mobilize during negative energy balance to support lactation. The triglycerides are broken down to non-esterified fatty acids (NEFA) and released into the blood circulation. When discussing ketosis, we tend to focus on how the liver coordinates the metabolism of this NEFA. After liver cells uptake NEFA, there are four major metabolic fates: produce cell energy (complete oxidation via the tricarboxylic acid – TCA – cycle), export out of the cell as very low density lipoproteins (VLDL), storage as triglyceride for later use or ketogenesis (Figure 1). Ketogenesis produces the ketone bodies acetone, acetoacetate and BHBA, which are secreted into blood circulation to provide energy to other tissues. Note that ketone bodies themselves are not always “bad” for the cow because they do help provide energy to non-liver tissue. Instead, it is when ketone production exceeds use by other tissues that blood BHBA concentration becomes elevated, serving as a red flag that there is a metabolic imbalance. 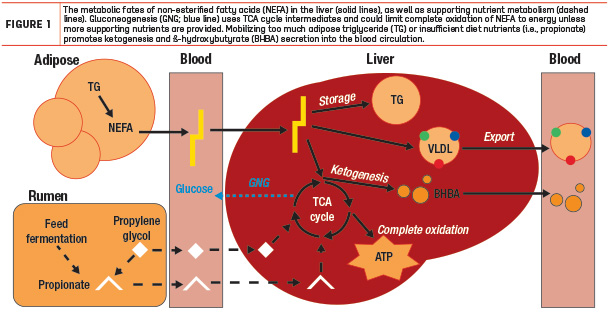 What metabolic imbalances occur that lead to ketosis? We will focus on what are likely the two main ketosis causes from a nutrition standpoint: excessive weight loss and low feed intake. Also, we will discuss prevention of ketosis by these mechanisms with nutritional and cow management.

Excessive weight loss can lead to more NEFA being mobilized to the liver than it can convert to energy through the TCA cycle. This makes the liver metabolize NEFA more through the other metabolic fates, specifically producing more BHBA by ketogenesis. Obese cows with a body condition score (BCS) greater than or equal to 3.5 points at calving are at a 2.4-3 times greater risk for ketosis after calving because they are more prone to mobilizing too much adipose triglyceride. Cows typically gain weight in late lactation when their milk production is less persistent, but feed intake is relatively high. The best method to prevent too much late-lactation weight gain is good reproductive management; the sooner a cow gets pregnant, the sooner she is dried off and the fewer DIM she has to gain weight in late lactation. Another strategy is to group low-production and late-lactation cows together, which allows a lower-energy diet to be fed that better matches their requirements. The dry period is too late to prevent BCS gain, but active monitoring of post-dry-off conditioning is important to ensure cows are not being overfed energy and gaining weight.

Low feed intake can contribute to ketosis by exacerbating the negative energy balance and weight loss. Also, lower intake means less nutrients from rumen fermentation – such as the volatile fatty acid propionate – and the diet to support the metabolism of NEFA to energy (Figure 1). This is compounded by the fact that cows need to make glucose (blood sugar) to support milk production. That metabolic process, gluconeogenesis, pulls nutrients out of the liver TCA cycle, which can in turn limit complete oxidation of NEFA, promoting ketogenesis. To promote fresh cow intakes, ensure feed is always available for fresh cows and that it is regularly pushed up. Also, try to limit social stressors like cow movements and overcrowding at the feedbunk. Of course, there are a lot of nutritional opportunities through ration formulation too. If early lactation cows can be grouped together, work with your nutritionist to feed them a targeted diet that leverages your more-digestible forages, is more energy dense and possibly includes helpful nutritional additives. There are many nutritional additives that can support cow metabolism and prevent ketosis. Specific additives you and your nutritionist can consider are monensin, rumen-protected methionine, choline and gluconeogenic precursors like lactate.

There is surprisingly little research on the effectiveness of different products to treat ketosis. Of the numerous products sold on the market, propylene glycol (PG) and dextrose solution are the most time tested and well researched. The goal of these conventional ketosis treatments is to support the liver’s ability to metabolize fat to energy, as well as maintain enough blood sugar to support milk production.

PG supports the liver and ketosis recovery by providing nutrients to the TCA cycle, promoting NEFA metabolism to energy and gluconeogenesis (Figure 1). In the rumen, PG can be fermented to propionate and support the TCA cycle as discussed previously. The PG that reaches the liver will be metabolized to lactate, which can support the TCA cycle too. Treatment protocols vary but typically suggest a 300-milliliter oral drench of PG once a day for three to five days.

Intravenous (IV) dextrose helps support the cow’s metabolism by directly supplementing blood sugar. You can think of this treatment as more of a catch-up mechanism, letting nutrients stay in the TCA cycle to metabolize NEFA to energy. Recent research at Cornell University has suggested that a combination treatment of IV dextrose (500 milliliters of 50% dextrose solution) and oral PG for three days might be the more effective than using PG alone. However, some researchers and veterinarians are concerned that too much IV dextrose might send mixed signals to the cow’s liver and make it somewhat dependent on the extra sugar instead of making its own. I recommend reserving IV dextrose for cows with more serious ketosis cases that display clinical signs or have blood BHBA greater than 3 millimoles per liter. Consider administering IV dextrose on the day of diagnosis for these cases, as well as oral PG for three to five days. Test the cow’s blood BHBA the next day; if BHBA is still above 3 millimoles per liter, it might be beneficial to give another IV dextrose treatment.

Mastering the fundamentals of ketosis will pave your way forward to improving cow health and herd profitability. From this foundation, we will be prepared to take the next steps forward in optimizing ketosis management as new innovations come onto the horizon. In particular, the incorporation of sensor technologies and data-based solutions into herd management are becoming of increasing interest. We will soon find ourselves adapting these novel methods to personalize ketosis management to individual cows and better monitor the herd-level impact of management decisions on cow metabolic health.