Sophie Eaglen
It is now a standard feature on any bull evaluation page: the genotype for beta casein, better known as A2. Despite not being a trait, nor a genetic defect, the A2A2 genotype has grown to become an undeniable marketing tool.
Sophie Eaglen

The idea that one can breed for different milk composition beyond fat and protein levels gripped the interest of many in the dairy industry. The continued interest in A2A2 demonstrates that breeding for desirable milk characteristics, such as better digestibility, remains attractive even when producers are not currently paid for them.

As interest in breeding for A2 grew, so did the number of bulls with the A2A2 genotype. A decade after the entrance of genomic selection, the number of A.I. bulls with reported genotypes for beta casein has grown to a considerable level. This allows us to take a closer look at how A2 genotypes are distributed among A.I. bulls and what this says about the current and future use of this tool by the A.I. industry.

Beta casein is a milk protein that exists in two forms: A1 and A2. The two forms differ by a single amino acid. Animals can be genomic tested to determine their genotype for beta casein. Cows with an A2A2 genotype only produce milk with the A2 form. The A2A2 genotype is preferred over the A1A1 genotype due to the suggested better digestibility of A2A2 milk.

The A2 distribution among A.I. dairy bulls

Numbers of bulls are given between brackets. Jersey and Guernsey present the highest frequency of A2A2 bulls, followed by the Brown Swiss, Ayrshire and Holstein. The A1A1 genotype is lowest across the board.

The National Association of Animal Breeders (NAAB) categorizes A.I. bulls based on so-called status codes. Status codes identify the type of bull that data is presented on. You may have noticed status codes being mentioned on industry ranking lists to identify proven versus genomic bulls.

The NAAB status codes allow us to look at the presence of a selection pressure for the A2A2 genotype. The interest in breeding for an A2 herd is growing, and the interest in A2 sires flows organically from that. A.I. companies adjust their sire selection based on market demand. Figure 2 demonstrates that this is certainly the case for the demand of A2A2 bulls. 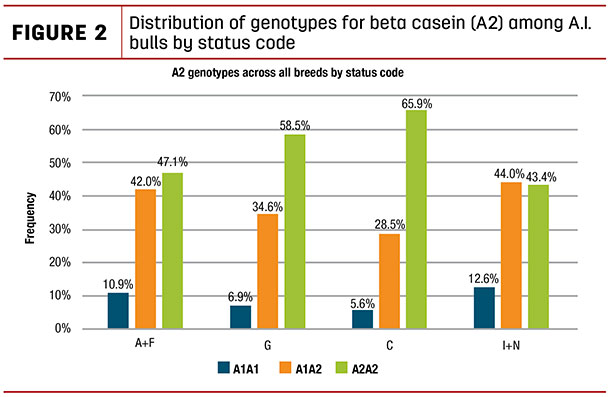 To support the shown selection pressure for A2A2 bulls, we have plotted a trendline of A2A2 frequencies by date of birth of the bull. Figure 3 shows that, indeed, there is a higher frequency of the A2A2 genotype among younger bulls. 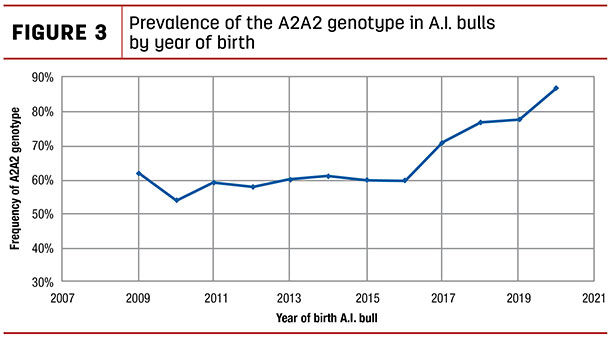 The considerable jump in frequency after 2016 is interesting and may be related to the uptake of genomic testing. The A2 genotype is a popular element of any commercial genomic test and key to breeding for an A2 herd. While genomic testing has been available since the early 2010s, the widespread adoption of this technology started around 2015.

The NAAB Cross Reference Databases houses data on A.I. bulls from many countries.

Figure 4 shows the A2A2 genotype frequency by country of origin, based on the country code in the bull’s official registration ID. Numbers of bulls are given between brackets. 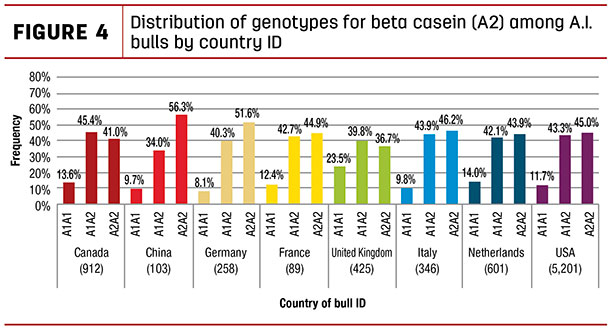 The highest number of A2A2 bulls is found among the A.I. bulls from China. This may not be surprising, given the country’s recent increased interest in the production and consumption of A2 milk. An important factor to note is that all bulls from China are Holsteins. Following China in highest frequency of A2A2 bulls are Germany, Italy and the U.S.

What about the other ‘casein values’?

Figure 5 and 6 demonstrate the distribution of genotypes for kappa casein among A.I. bulls by breed and semen status code. We can see that the selection pressure for kappa casein is less strong than that for A2A2, yet clearly present. 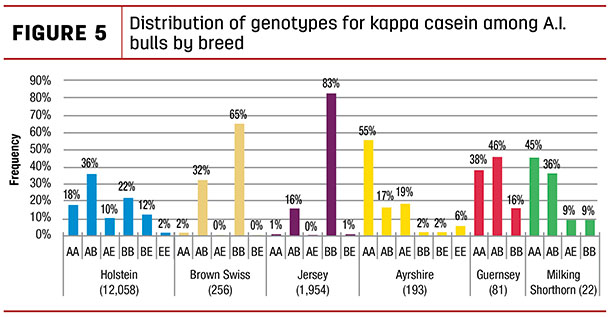 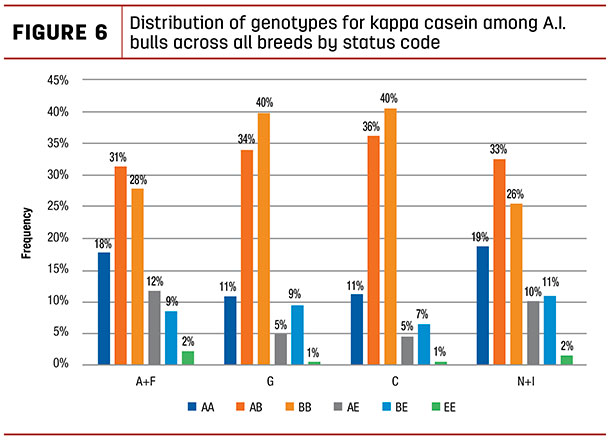 Our evaluation of genotypes for beta lactoglobulin shows much more random distribution across A.I. bulls by breed and by status code, indicating a current lack of selection pressure and market demand.

The A2 genotype prevalence in A.I. sires shows that A2 is here to stay. With the highest prevalence shown in the youngest bulls that are yet to collect semen, the future appears to be one filled with available A2A2 bulls for A.I. This reduces some of the pressure on international trade to countries that have import criteria favoring bulls that are A2A2. While kappa casein and beta lactoglobulin do not show strong trends yet, it is not unthinkable these values may follow a similar path in the years to come.

Statistics in this article were generated from the National Association of Animal Breeders (NAAB) Dairy Cross Reference Database. This database consists of bulls destined for commercial semen sales which provides an unprecedented dataset of A.I. bulls across various countries of origin, breeds and ages.

Most of the bulls enrolled with NAAB receive an official U.S. evaluation. All have an NAAB code which they use for bull identification on semen straws and in bull catalogs. In total, casein genotypes were collected on 16,880 bulls of 13 different dairy breeds and 25 countries of origin. Statistics on breeds and countries with most bulls represented are summarized in this article.