January prices for all individual classes of milk were up from December:

January Class III-IV milk prices moved higher due to increases in values of butterfat and milk solids used in monthly milk price calculations, but the value of protein was down.

With higher individual milk class prices, January blend or uniform prices at standardized test rose in all FMMOs (Table 1) and were the highest since the final months of 2014. When multiplied by milk class utilization in each FMMO, January uniform prices increased in a range of $1.52-$2.37 per cwt across all 11 FMMOs compared to December. The high uniform price for January was $25.49 per cwt in Florida FMMO #6; the low was $20.59 per cwt in the upper Midwest FMMO. 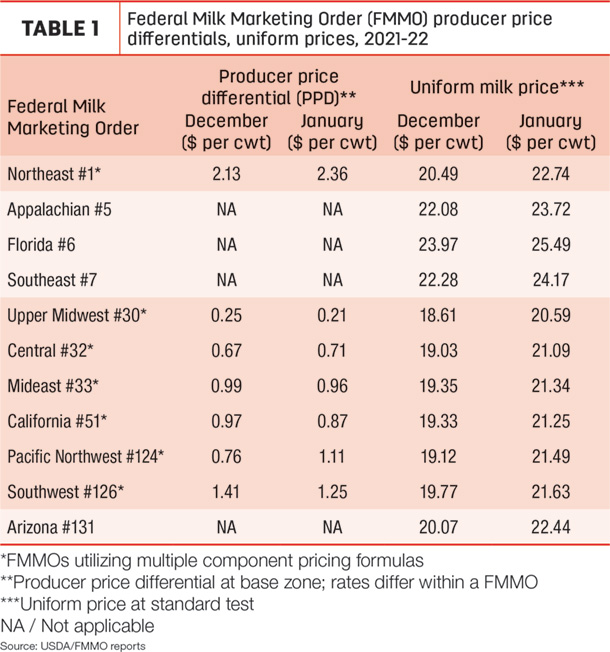 January baseline PPDs were positive and changed little from December, ranging between 16 cents less to 35 cents more than December.

January’s milk class price relationship not only created a wide spread ($2.71 per cwt) between Class IV and Class III milk, but the Class IV price was also higher than the average Class I price with differentials, giving Class IV handlers incentive to depool.

You can get a general picture of depooling in a couple of ways: on a volume basis, comparing monthly pooling totals to previous months, and on a percentage basis, comparing the percent utilization of a specific class of milk relative to all milk pooled that month.

Looking at January data, about 12.65 billion pounds of milk were pooled on federal orders in January.

Class IV milk pooled across all FMMOs fell to about 1.217 billion pounds (Table 2), the lowest volume since February 2019. January Class IV milk utilization represented about 9.6% of total FMMO milk marketings, less than one-third of the level seen in the first half of 2021 and the lowest percentage since January-February 2019, when Class IV prices were running $1.50-$2 higher than Class III milk. 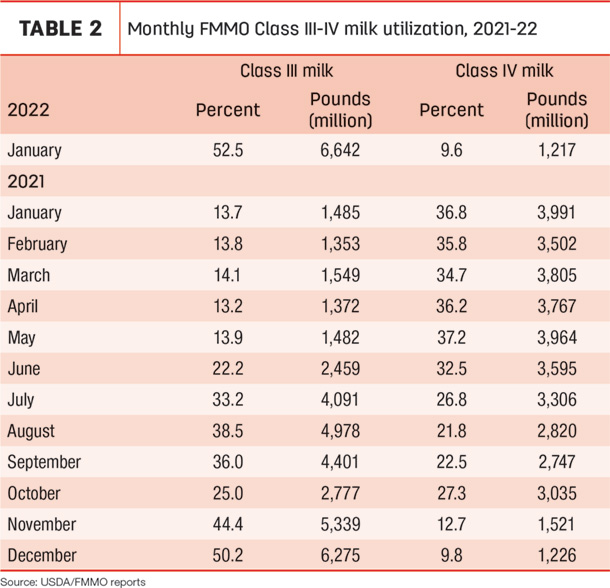 January’s Class III-IV milk relationship again had an opposite impact on Class III pooling. With the Class III milk price below than Class IV price, Class III handlers brought more milk back to the pool. On a volume basis, Class III milk pooled in January was estimated at about 6.64 billion pounds, more than four times the average monthly volume pooled during the first five months of 2021 and the most since June 2019. As a percentage of utilization, Class III milk represented about 52.5% of the total FMMO pool, also the highest since the first quarter of 2019.

Class and uniform prices will move higher for February milk marketings but the incentives for depooling continue.

Individual FMMO pooling, depooling and repooling rules play a role in how much. And milk markets change, so the ride continues.

After a seven-month reprieve, the debate over the “higher-of” versus “average-of plus 74 cents” formula resurfaced in February.

One other historical side note: Two monthly average milk prices announced by the USDA both improved for October milk marketings. However, the spread between the average “all-milk” and “mailbox” prices widened.

Based on Progressive Dairy calculations, October 2021 mailbox prices were $1.16 cwt less than the all-milk prices for comparable states and regions. That was the largest difference since May 2021, a month in which PPDs were negative in all applicable FMMOs. Mailbox prices averaged about 86 cents per cwt less than all milk prices in July-September.

The all-milk price is the estimated gross milk price received by dairy producers and includes quality, quantity and other premiums but does not include marketing costs and other deductions.

The mailbox price is the estimated net price received by producers for milk, including all payments received for milk sold and deducting costs associated with marketing.