Email Dave Natzke
Progressive Dairy’smonthly review of the numbers and their potential impact on your milk check.

Supporting higher uniform prices, prices for all individual classes of milk were up from January:

After a seven-month reprieve, the debate over the “higher-of” versus “average-of plus 74 cents” formula resurfaced in February. The difference between the advanced Class III skim milk pricing factor ($10.43 per cwt) and the advanced Class IV skim milk pricing factor ($12.97 per cwt) was $2.54 per cwt. When adding the advanced butterfat pricing factor, producers received 51 cents less under the average-of plus 74 cents Class I mover compared to the old higher-of formula. That difference was diminished in producer milk checks, however, depending on Class I utilization in each FMMO and its impact on “blend” or uniform milk prices.

February Class III-IV milk prices again moved higher due to increases in values of butterfat and milk solids used in monthly milk price calculations, but the value of protein was down slightly.

In FMMOs reporting component tests for pooled milk, average butterfat and protein tests were down slightly from January.

With higher individual milk class prices, February blend or uniform prices at standardized test rose in all FMMOs (Table 1) and were the highest since the final months of 2014. When multiplied by milk class utilization in each FMMO, February uniform prices increased in a range of 60 cents to $1.30 per cwt across all 11 FMMOs compared to January. The high uniform price for February was $26.71 per cwt in Florida FMMO #6; the low was $21.19 per cwt in the Upper Midwest FMMO. 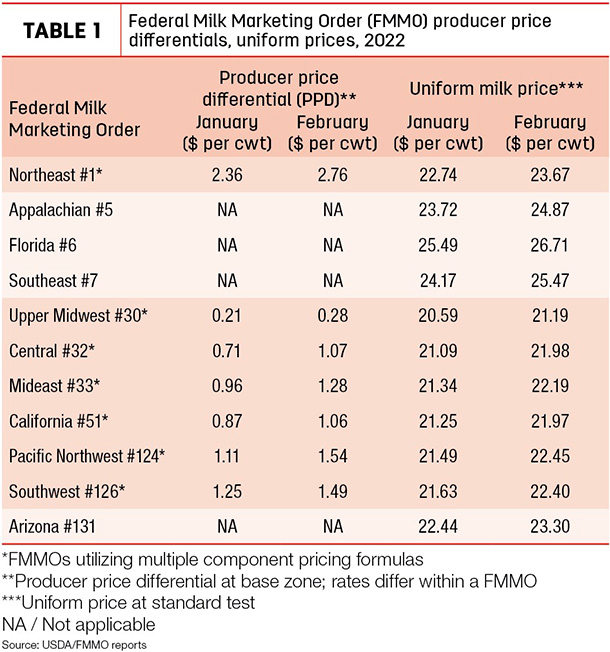 Looking at February data, about 11.69 billion pounds of milk were pooled on federal orders, down about 960 million pounds from January. Factoring into that decline, of course, is the shorter month. 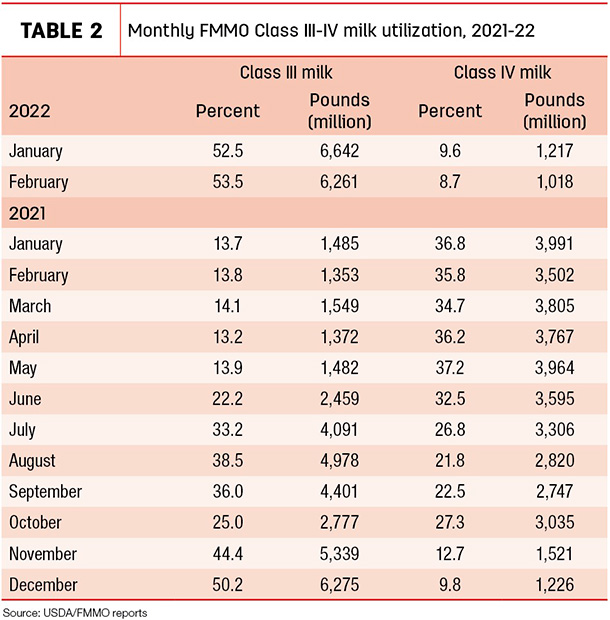 February’s Class III-IV milk relationship again had an opposite impact on Class III pooling. With the Class III milk price below than Class IV price, Class III handlers brought more milk back to the pool. On a volume basis, Class III milk pooled in February was estimated at about 6.261 billion pounds, more than four times the average monthly volume pooled during the first five months of 2021. As a percentage of utilization, Class III milk represented about 53.5% of the total FMMO pool, also the highest since the first quarter of 2019.

Class and uniform prices will move higher for March milk marketings, but incentives for Class IV milk depooling will remain.

The Class I mover formula again comes into play. At $3.12 per cwt, the difference between the advanced Class III skim milk pricing factor ($10.59 per cwt) and the advanced Class IV skim milk pricing factor ($13.71 per cwt) grew substantially. Based on Progressive Dairy calculations, the Class I mover calculated under the higher-of formula would have resulted in a Class I base price of $23.67 per cwt, 79 cents more than the price determined using the average-of plus 74 cents formula.

Individual FMMO pooling, depooling and repooling rules play a role in how much. And milk markets change.

Updating previous months, two monthly average milk prices announced by the USDA both improved for November 2021 milk marketings. And with FMMOs reporting PPDs that month, the spread between the average “all-milk” and “mailbox” prices shrunk.

Based on Progressive Dairy calculations, November 2021 mailbox prices were 81 cents per cwt less than the all-milk prices for comparable states and regions. That was the smallest difference since May 2020, when the COVID-19 pandemic disrupted milk markets and FMMO class pricing.

The all-milk price is the estimated gross milk price received by dairy producers and includes quality, quantity and other premiums but does not include marketing costs and other deductions.

The mailbox price is the estimated net price received by producers for milk, including all payments received for milk sold and deducting costs associated with marketing.