Tech for cows heads into 2022 with momentum

Largest vertical growing center in U.S. to be built on Texas dairy 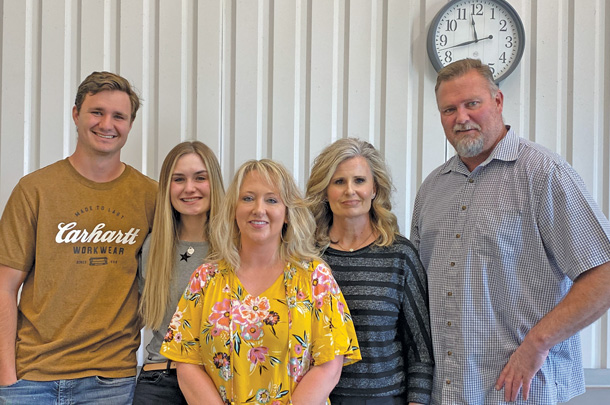 Utah-based Grōv Technologies announced that Cnossen Dairy of Hereford, Texas, has signed a definitive agreement to build a controlled environment feed center and grow fodder indoor year-round. At the time of announcement, it was the largest vertical growing center to be built on a production-volume basis. The center will produce over 288,000 pounds of feed per day on less than 5% of the water used in conventional farming, according to the company. These savings will be critical in lessening the impact of drought conditions affecting Cnossen Dairy and many dairies in west Texas and across the western U.S.

“Feed is our No. 1 expense,” Cnossen said. “If we can make it become more stable – take the highs and the lows out of the cost of it – that would be nice.”

The farm presently grows 60% to 70% of its own forage – corn silage, sorghum silage, triticale silage and wheat silage. Growing some of that forage on-farm, and with less water, is one of the things about the system that interests the dairy.

The technology is intended for use with incoming youngstock transferred to a new facility. It works by listening to an animal’s heart and lungs with six sound sensors mounted together on a handheld wand. The device connects to a tablet via Bluetooth. Collected sound data for each animal is analyzed in an app on a tablet and paired with rectal temperature and animal weight. A machine-learning algorithm then utilizes all of that data to predict the risk of BRD for each animal and provide the user with a suggested antimicrobial control decision: “Treat” or “Do Not Treat.”

The company claims its first-of-a-kind technology can “reduce the cost of BRD control practices, improve animal stewardship and support judicious antimicrobial use for the industry.”

A company that produces self-contained, fully automated, shippable fodder-growing systems based in Utah has been admitted into the F3 Tech Accelerator Program.

GrowBox claims to be able to match the annual dry matter output of a 50-acre field of alfalfa hay with one of its 45-foot shipping container units. The system recaptures water used during the growing process. The company claims only 250 gallons of fresh water are needed to grow and harvest 2,000 pounds of feed. Their system also injects ozone into the recirculating water to combat mold and fungi that tend to grow inside closed fodder systems.

GrowBox will received expert guidance from F3 Tech mentors in business development, marketing, legal and finance. The accelerator requires no equity from participants, a unique value proposition for many early stage companies.

U.S.-based Pharm Robotics recently posted a video on its LinkedIn page to show it now has a proof of concept for the idea its founders have been pitching for more than a year. (The company closed a crowd-funding round in 2021.)

The company recently confirmed to The Cow Tech Report that the next stage of development is to install the proof of concept on founder Marinus Dijkstra’s farm in California for further testing.

The group’s animal welfare standard covers the animal’s entire life (breeding through lactation and through subsequent dry periods and calvings). They will also certify farms at one of five levels based on certain practices a dairy may employ. For example, the lowest certification level prohibits tiestalls and requires pair-raising of calves. Medium-level certification requires outdoor access for all cattle. The standard’s highest level of certification requires cattle be on pasture for 200 days a year and that calves stay with their dam until weaning at 24 weeks.

“HerdDogg’s partnership with G.A.P. … establishes a new standard for the digital capture and analysis of animal welfare metrics,” said Melissa Brandao, founder and CRO of HerdDogg. “We are thrilled to be a part of this as a significant step toward the overall improvement in farm animal care and reporting accuracy while reducing a producer’s time spent completing paperwork.”

According to the American Society for the Prevention of Cruelty to Animals’ website, there are not yet any dairies that are G.A.P.-certified.

Farm Bureau recently finished its annual innovation challenge. Two of the companies who competed work in the cow tech space.

Caravan Tech was named the People’s Choice award winner in the American Farm Bureau’s Innovation Challenge. The award comes with a $5,000 bonus in addition to the $10,000 awarded for being a top 10 finalist. ExciPlex received $10,000 as well.

The new technology for measuring total blood calcium concentrations, which is first launching in Canada, has greater than 95% accuracy, 90% sensitivity and 95% specificity. The product consists of a user-friendly handheld device and disposable tests, which the company says only take a minute to perform and can be completed cowside. The company recommends using its new product to test total blood calcium around the time of calving and then again in the first two to four days post-calving.

The new robot can complete all milking procedures in-liner with just one attachment, including cleaning, stimulation, fore-stripping, milking and post-dipping. The feature is dubbed the “in-liner everything” process. New software logarithms further optimize the robot’s post-milking cleaning procedures by allowing some functions to occur simultaneously, shaving seconds off the process. This reduces box time per cow milking. The company says those time savings mean the robot spends a higher percentage of its time milking cows.

The new robot also includes a new milk separation mode, allowing a producer to milk a series of special-needs cows, whose milk must be separated from the tank, without requiring an intermediate box cleaning between each cow. The company claims this feature means a producer can “accomplish daily milking chores faster and get the box back open to normal cow flow sooner.”

AI startup and milking robot manufacturer to team up

Start-up Connecterra and Lely will continue working together after what the two companies said was a “successful pilot” project to test integration between Lely’s Horizon data platform and Connecterra’s artificial intelligence platform, Ida. The two companies recently announced their intention to further co-development of data products and formalize a commercial relationship.

Lely announced it will now license Ida Enterprise for use in its farm management system, Lely Horizon.

“We believe that digitization of dairy farming is key and needs to be handled with care. Integrating with partners like Connecterra to develop a strong platform helps farmers to bring out the value in their data,” said Freddie Ruijs, head of digital farming at Lely.

The companies hinted that continued co-development efforts could lead to a joint launch of new features, as well as opportunities for more Lely customers to give permission to incorporate their data into, and gain access to, Ida’s platform.

U.K.-based researchers will soon be testing a mining industry technology to see if it will reduce methane in indoor cow housing situations. The technology is a bimetallic catalyst based on platinum and palladium that was originally used to reduce methane in coal mines. It’s unknown if the technology could be successfully reapplied for a different working environment such as a dairy farm.

Researchers in the Netherlands recently installed devices measuring on-farm methane emissions on multiple farms. The “Ghostbuster proton pack” looking device will be placed on more than 100 farms with the intention of gathering data about methane emissions on over 10,000 cows. The data will be used to inform a breeding value for methane emissions. Semen company CRV is supporting the work at Wageningen University.

Muzzles may be the key to biometric cattle identification

An Australian researcher is testing if cattle muzzles – like human fingerprints – could be used to tell one cow apart from another. He says his research so far shows each muzzle is unique to each individual cow. He’s developing technology that could identify cows visually based on their unique muzzles. So far he claims it is 99.11% accurate in a lab setting.

Aidan Connolly has stepped down as CEO of start up Cainthus and will work full time in the ag tech investment and consulting firm he founded – AgriTech Capital.

“The need for agritech solutions has never been greater, and it is clear that they will play a significant role as we transform the ways in which we produce food,” he wrote in a post announcing the change on LinkedIn.

Connolly has served as Cainthus’ CEO for three years.

PHOTO: Cnossen Dairy of Hereford, Texas, has signed a definitive agreement to build a controlled environment feed center and grow fodder indoor year-round. It will be the largest in the U.S. based on volume of fodder produced each day. Courtesy photo.