To help weak calves suckle after birth, the Madigan Squeeze Technique acts to stimulate the pressure of coming through the birth canal.

After a difficult delivery, it is always exciting to have a live calf, but that feeling is quickly dampened when the calf does not suckle or thrive. In the veterinary world, this is called neonatal maladjustment syndrome, commonly referred to as a “dummy calf” or “weak calf.” Calves like this can be seen after dystocias, traumatic births, cesarean sections or being born to a compromised dam.

A few years ago, University of California – Davis equine neonatal expert and veterinarian Dr. John Madigan developed a technique to treat foals with neonatal maladjustment syndrome. He hypothesized that the biochemical switch that occurs while the newborn is passing through the birth canal was not happening, and thus these newborns were continuing their calm intrauterine state instead of becoming alert after birth. He developed the Madigan Squeeze Technique (MST), which acts to stimulate the pressure of coming through the birth canal. The theory and technique has been extrapolated into use with cattle, and many dairies and calf ranches are finding the technique to be successful.

The Madigan Squeeze Technique should not be tried on calves that have respiratory problems, broken ribs or neuromuscular disorders. The MST is easy to perform. Special ropes can be purchased, but any soft rope with a fixed loop on the end can be used.

The technique is as follows:

1. Starting at the withers, hold the loop and then thread the rope across the neck and between the front legs, then bring the rope back to the top of the withers. (Photo 1) 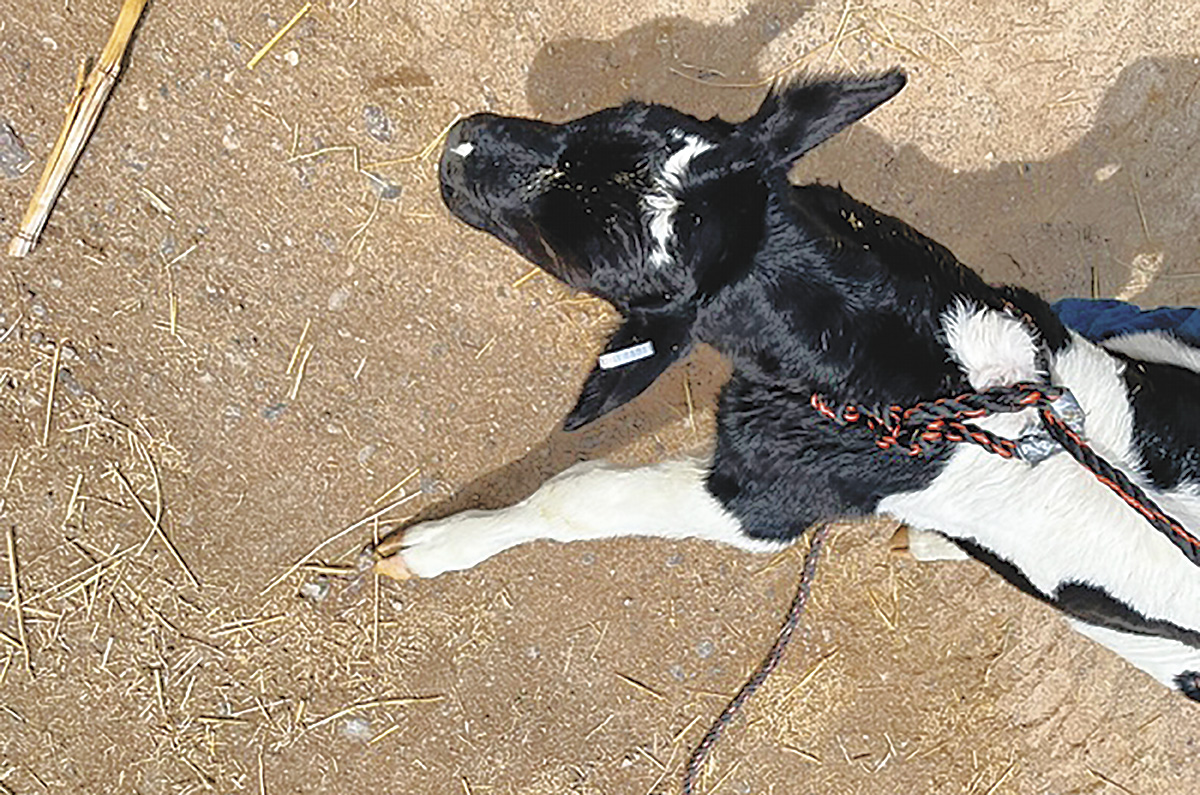 Pass the rope through the fixed loop and pull until snug, being sure there is pressure on the chest but breathing is not impeded. (Photo 2) 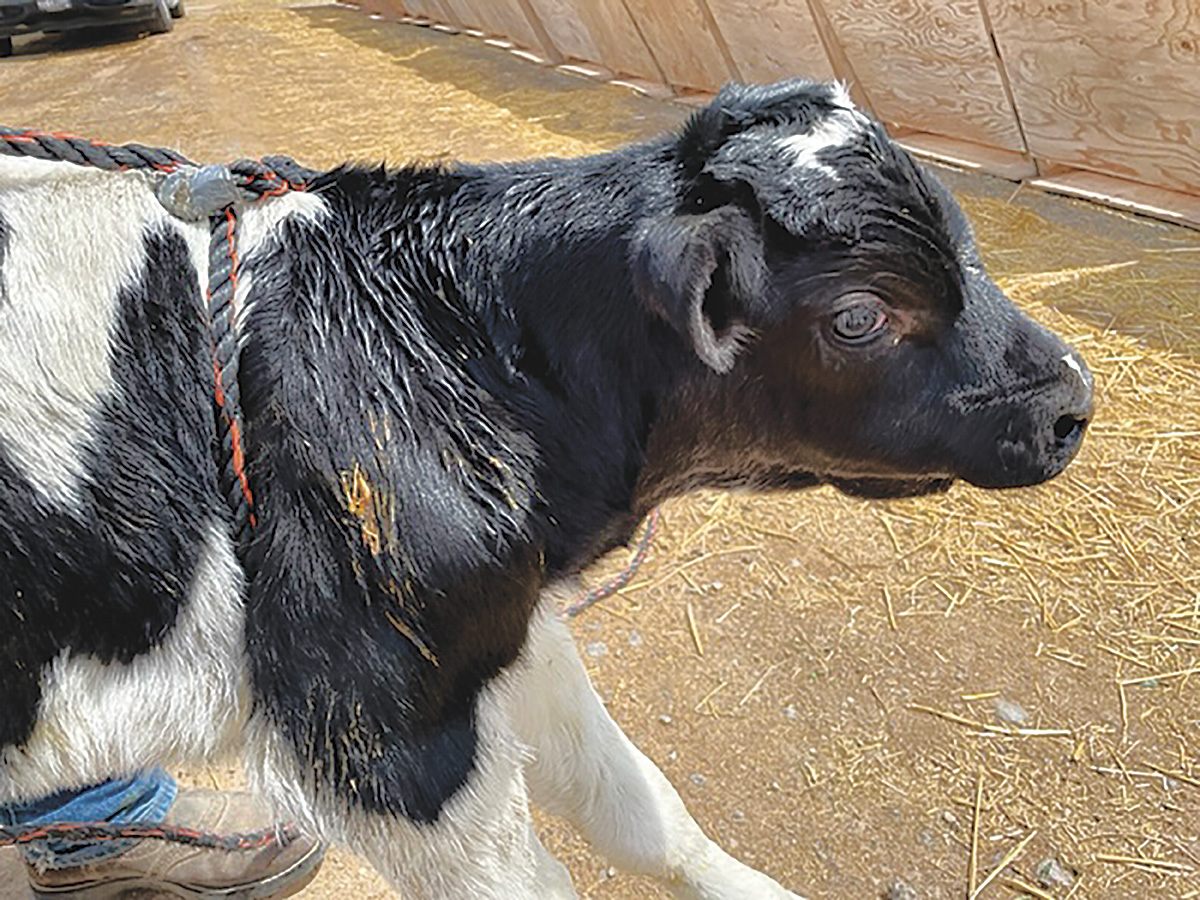 Next, pass the rope over the top calf and make a half-hitch, snug the rope and make sure the rope is just behind the elbow. (Photo 3) 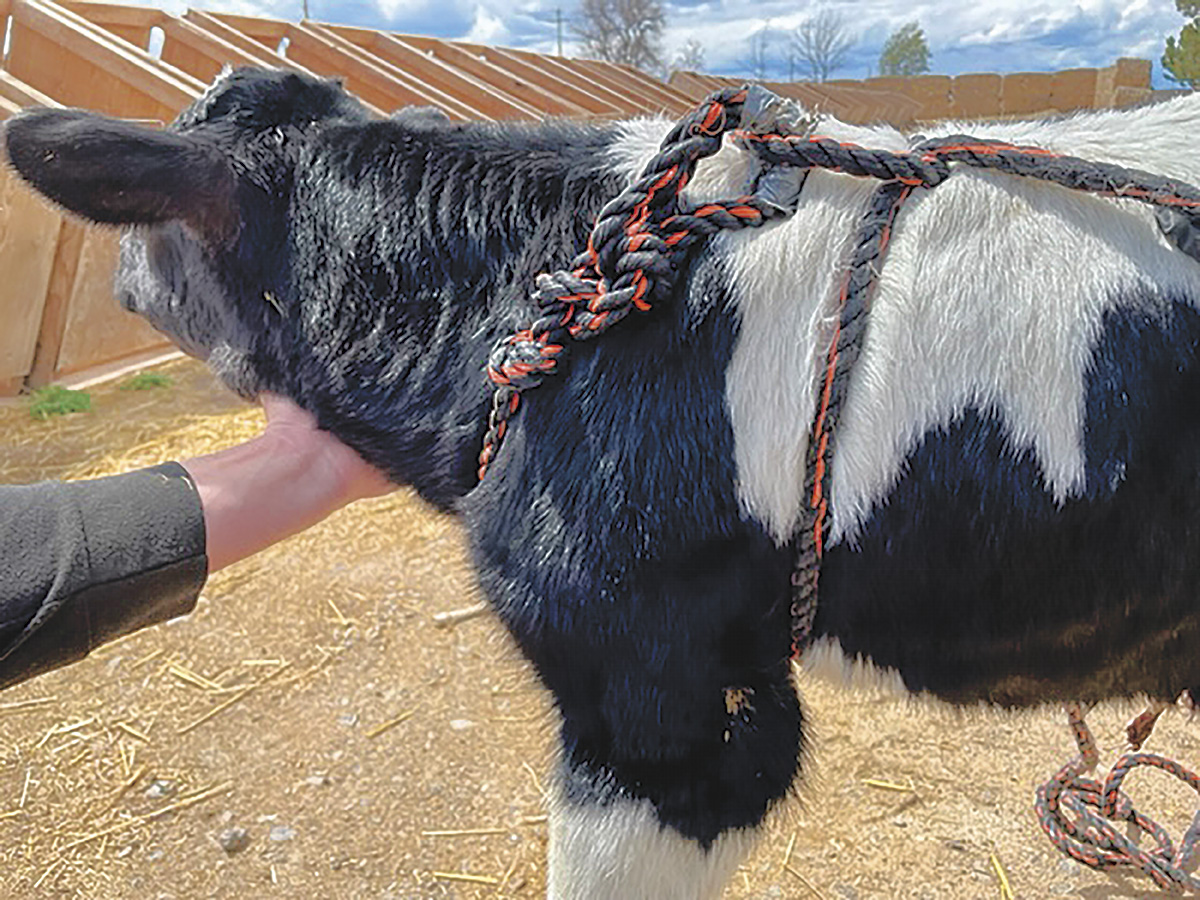 Pass the rope over the calf again, about 6 inches behind the first half-hitch, being sure the rope is snug. (Photo 4) 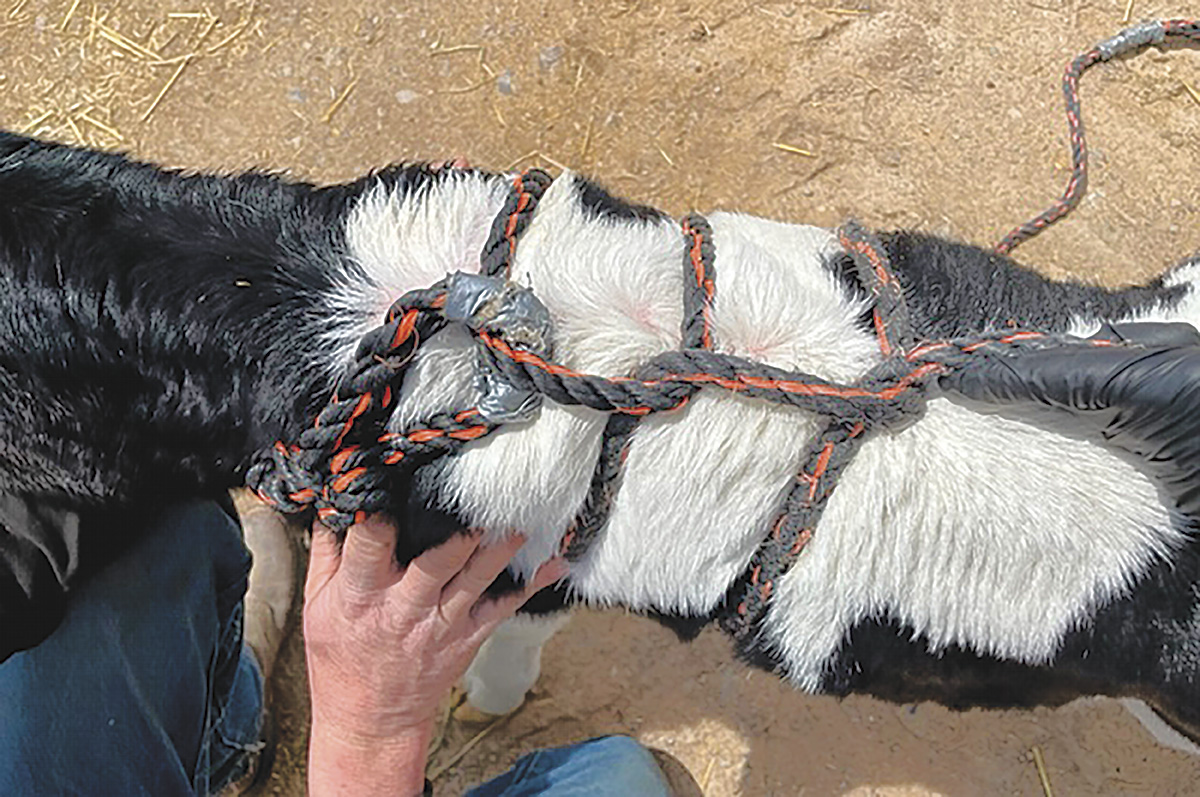 Stand behind the calf and apply steady pressure to the rope. Gradually increase the pressure until the calf lies down. (Photo 5) 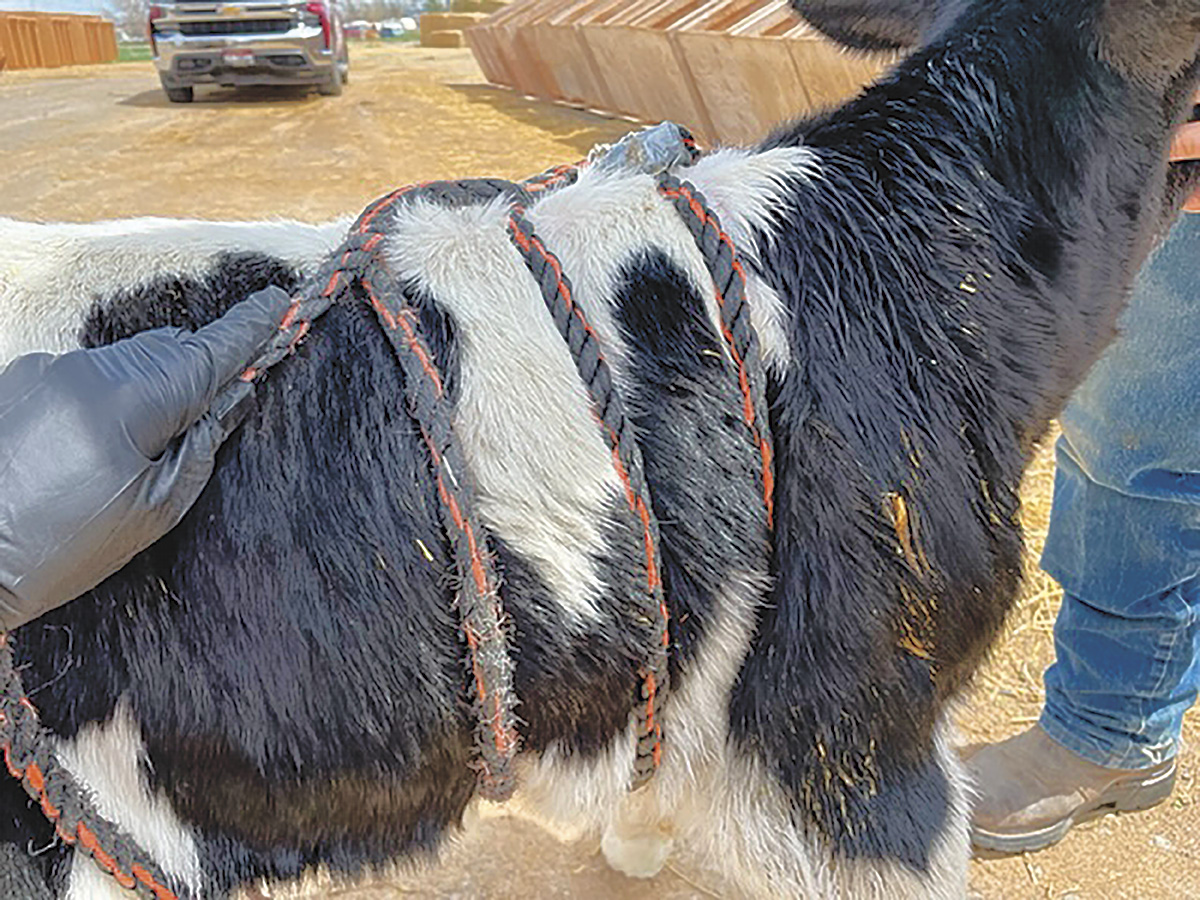 Keep the same amount of pressure on the calf for about 20 minutes. Stay on the back side of the animal in case it kicks occasionally. At the end of the squeeze, release the rope and allow the calf to rise when it chooses. (Photo 6) 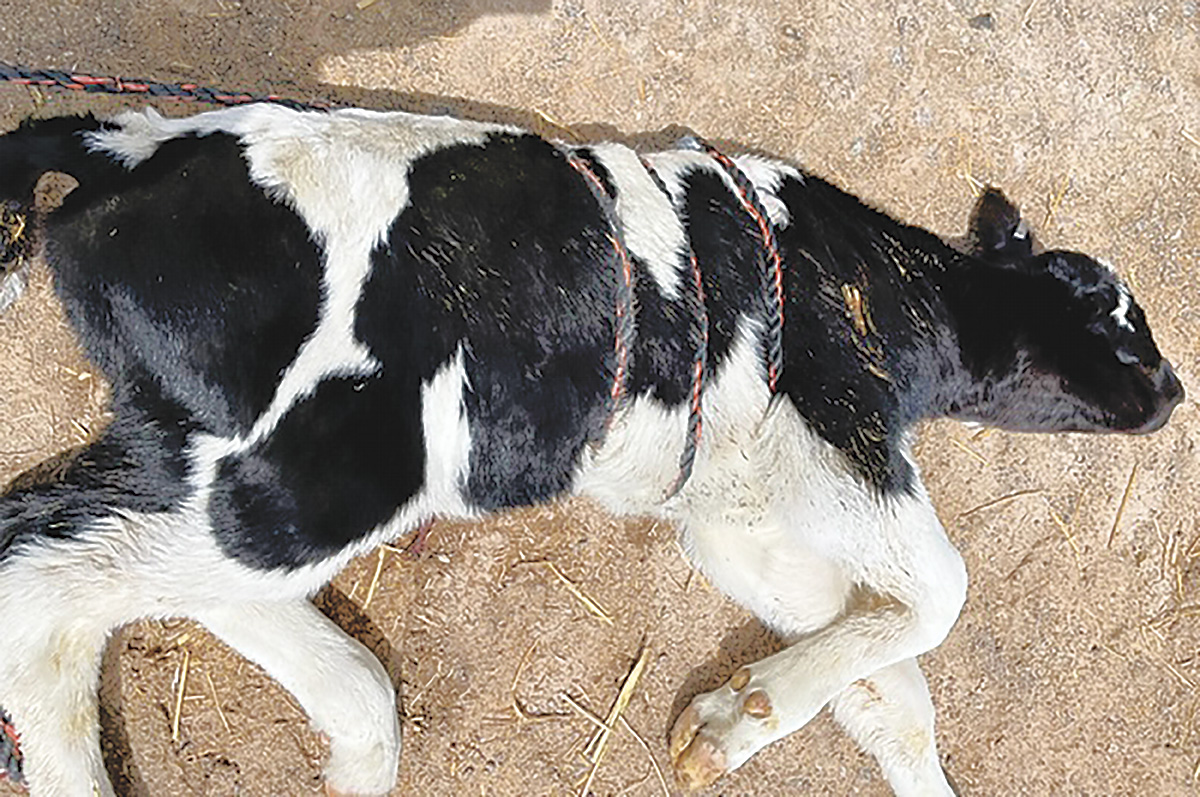 The procedure may need to be repeated several times throughout the first few days of life. While the MST does not work on every calf, it’s a cheap and easy treatment to try on dummy/weak calves. It is best to perform the MST with your veterinarian the first time, then after training, experienced workers can perform the technique.

Central States Testing is the leader in BVD-PI diagnostic testing with options of in lab or on site testing.

MicroBasics is an innovative company dedicated to animal health, nutrition, and food safety. Our products harness the infinite discoveries found in nature and couple those with advances in technology to help produce safer food.