Strong demand and higher prices over the past year have created growth and change for the world’s largest dairy companies, according to an annual report from Rabobank.

Rabobank’s yearly listing of the “Global Dairy Top 20” companies was released in late August (Table 1). Based on 2021 financial data in U.S. dollars, the combined sales of the world's 20 largest dairy companies were up 9.3% from the year before. When measured in euros, 2021 sales increases on a percentage basis were about 5% due to strengthening of local currencies against the U.S. dollar. 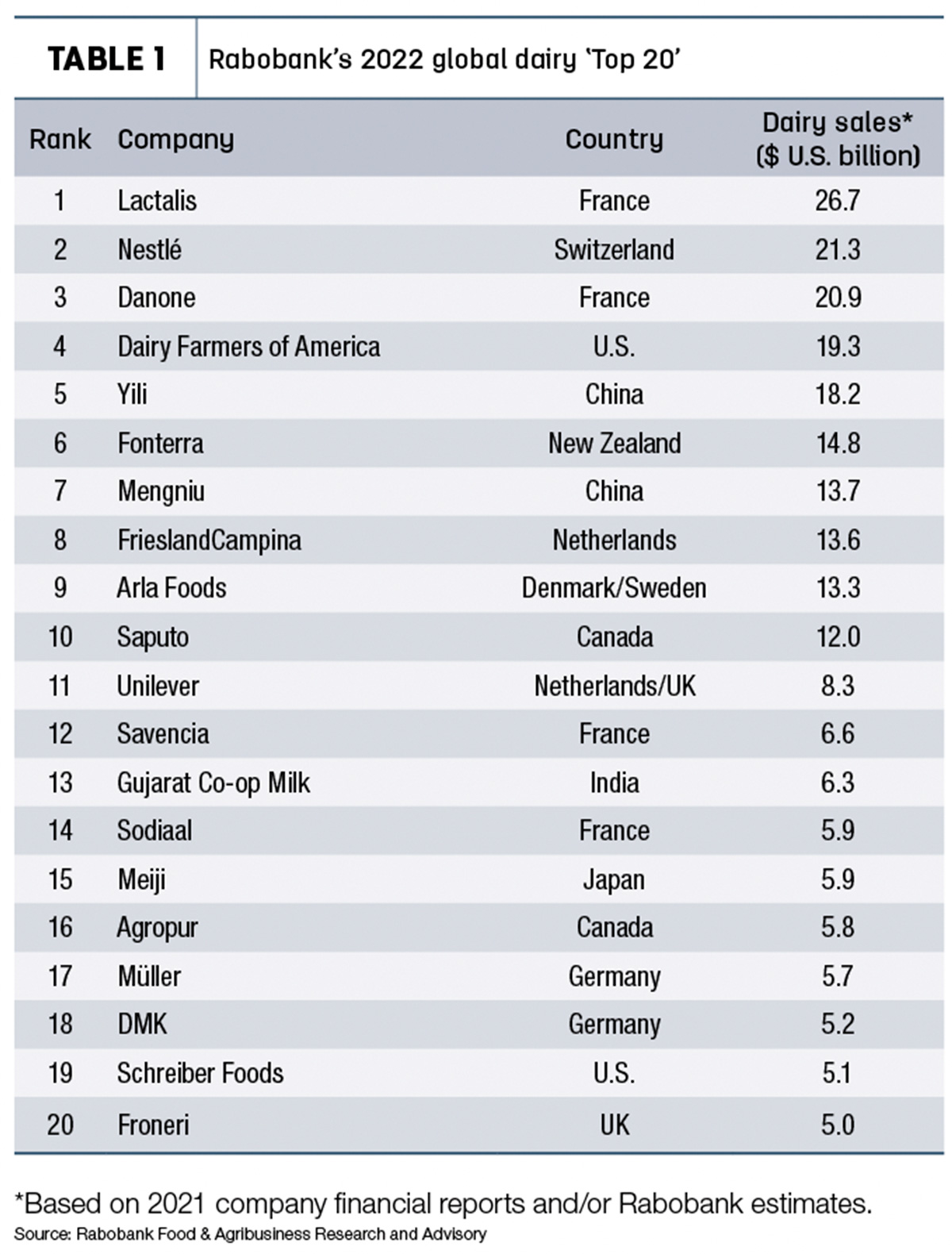 That followed 2020’s decline of 0.1% (U.S. dollar basis), as those companies dealt with COVID-19-related business challenges.

“This year’s ranking is characterized by the movers and the shakers,” Scheper said. Both turnover growth and strategic activities were more significant than in recent years causing movement in the ranking.

Among the top 20 spots, European companies increased their hold by one, to 11, with companies in the U.S., China and Canada holding two spots each. Companies in New Zealand, Japan and India rounded out the list. Merger and acquisition activity among top 20 companies remained relatively stable in 2021 but dropped in the first half of 2022, Scheper said.

Lactalis, based in France, strengthened its hold as the largest company after unseating long-time leader, Nestlé, in 2020. In addition to acquiring the cheese business from Kraft Heinz, Lactalis also purchased Groupe Bel subsidiaries in the Netherlands, Italy, Germany and the Ukraine.

U.S.-based Dairy Farmers of America (DFA), which moved into the third position in 2019 after acquiring substantial assets from Dean Foods, slipped one spot on the 2022 list, behind Danone.

Although it didn’t move up the rankings list, China’s Yili posted the largest sales gain, from $4.4 billion in 2020 to more than $18 billion (U.S. dollars) in 2021. China’s Mengniu jumped two spots, from ninth to seventh, moving ahead of FrieslandCampina and Arla.

Sodiaal moved up three spots to 14th after gaining control of Yoplait’s activities outside North America from General Mills. Two German companies moved in different directions: Muller jumped from 20th to 17th, while DMK fell from 12th to 18th.

U.S.-based Schreiber Foods held on to the 19th position. New on this year’s list is Froneri, based in the United Kingdom (U.K.), which had purchased Nestlé’s ice cream business in 2019. It displaced U.S.-based Kraft Heinz, which completed the sale of its global cheese business to Lactalis in November 2021.

Other highlights of the report indicate the largest dairy companies are increasing their presence in the dairy alternative market, with product portfolios including beverages, yogurts, frozen desserts, cheese and hybrid products. That makes it more difficult to extract pure dairy revenues as the designation of “dairy” is becoming more blurred.

Additionally, more dairy companies are working on their climate and sustainability targets for 2030, but also adding net zero ambitions for 2050.

“Looking forward to next year, we expect another strong year for combined Global Dairy Top 20 [sales] as the underlying dairy commodity prices hit record or near-record levels around the globe on the back of the war in Ukraine and escalating inflation,” Scheper said. “However, weaker global dairy demand in [the second half of] 2022 is anticipated due to the combination of COVID-19-related lockdowns, inflation impacting consumers’ purchasing power and other economic headwinds. Due to the weakening of local currencies – especially the euro against the U.S. dollar – some companies might struggle to maintain their positions and gains in this year’s ranking.”