As many of you already know from reading previous articles about our farm and family, you know that we rotationally graze our cattle. It was in the late 1990s when my husband, Peter, came home to farm with his dad. As they got into grazing, he started doing research about what breeds thrive in a grazing situation.

He discovered the Dutch Belted breed, decided he liked them and purchased his first few cows. Today, we are one of the largest breeders of Dutch Belted cattle in the Midwest. What makes this breed unique, and why do we like them?

The obvious thing that people first notice about them is their color pattern. As the breed name suggests, they have a white belt around their middle. They can either be red and white or black and white. They often go with the nickname, “Oreo cookie” cows. These animals can easily be confused with the Belted Galloway, which is a beef breed. However, when you get a good look at a Dutch Belted and a good look at a Belted Galloway, you can clearly see the difference. A Dutch Belted animal has the femininity of a dairy animal. They have a thin, smooth coat, small clean head and look like a dairy animal. The Belted Galloway has a thick coat and is built like a beef animal.

So where did these beautiful cows come from? As the breed name suggests, history traces them back to the Netherlands. The original belted cattle are described to have come from Switzerland and Austria, and were established by nobility in the Netherlands in the 17th century. The nobles liked this striking white belt on animals and worked to breed animals of all species that have a belt. That is why today you see belted goats, rabbits, pigs and even poultry. 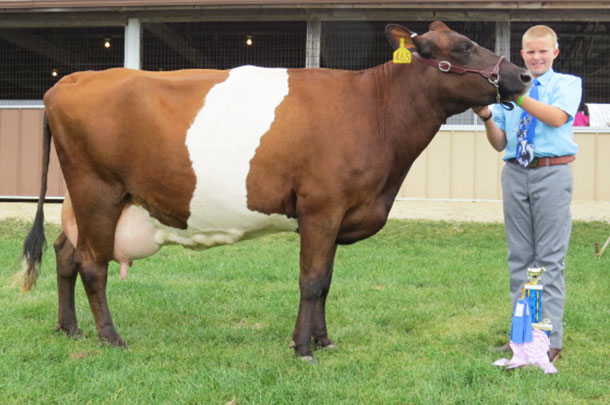 The Dutch Belted cows arrived in the U.S. in 1838 by the U.S. Consul to Holland. In 1840, P.T. Barnum had a connection with a nobleman and imported several head for the use of exhibition in his great circus. Barnum discovered they were excellent milkers and retired the herd from the circus to his farm in Orange County, New York. In 1906, a man in Peapack, New Jersey, imported a cow. The Dutch Belted Cattle Association of America was established in 1886 and is the oldest continuously registering herdbook for belted cattle in the world.

Dutch Belted animals have excellent grazing ability and forage efficiency. Their milk tests at 3.5 to 5.5 percent butterfat, with an annual production of 16,000 to 20,000 pounds. They are known for their longevity, quick breed back and calving ease. Their milk also has small fat globules, which produce a natural, soft curd that can easily be digested. There are some people who have a hard time digesting milk but can drink milk from Dutch Belted cattle with no problems to their digestive system.

Centuries of pure breeding and selection have resulted in remarkable genetic consistency. They offer a strong hybrid vigor when crossed with other breeds, and grass-based dairies have found them to be efficient on their farms. Due to the low numbers of purebred registered Dutch Belted females, the association has a “breeding-up” program in place.

The program uses full-blood registered bulls on females of other dairy breeds. This is how we have built our herd of Dutch Belted cattle. Peter has purchased a few females over the years, but it was through the purchase of semen and using that on cows that we have grown our herd. We have been breeding Dutch Belted cattle long enough now that most of the animals born on our farm have a very high percentage or are purebred.

Breeders of these striking, beautiful animals can be found throughout the states. There is a strong group of breeders in New York, a group in central Illinois and southern Wisconsin, and one large breeder out in Chino, California. It’s on my bucket list to go visit his farm one day. A breeder listing is available on the Dutch Belted Cattle Association of America website. The majority of the information for this article came from that website as well. You can find information on the breeding-up program and where to obtain semen on the website. 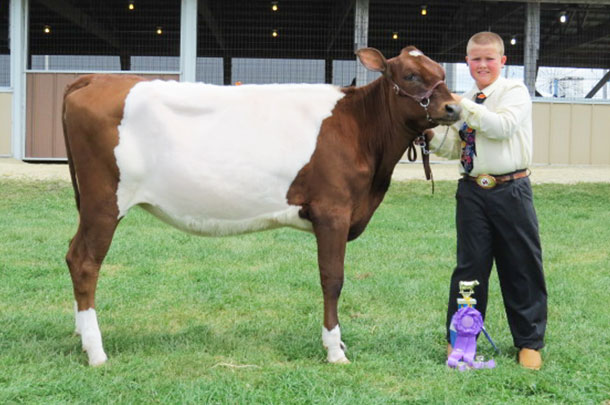 If you are interested in breeding these animals, it can be challenging to find animals for sale. My recommendation is that you by some semen; use it on the cows you already have; and start breeding your own herd. Make sure you are using semen from bulls registered with the Dutch Belted Cattle Association of America. Some companies do sell belted semen, but it is not from registered bulls.

I would also like to encourage my fellow dairy farmers to recognize the Dutch Belted breed as a dairy breed and that it’s important to the dairy industry. Many 4-H and FFA members start breeding these animals because of their uniqueness. If you have a younger dairy enthusiast in your area who wants to show a Dutch Belted animal at the local or county fair, allow it.

Many areas of the country that have a strong population of Dutch Belted cattle have their own breed class in county fairs. The New York State Fair even has a Dutch Belted show. We recently sold a belted heifer to a young man just getting started in farming. He only lives about an hour from us, but has a passion for the breed. It is these young breeders who are going to allow our breed to continue to grow and thrive.  PD

Christina Winch is a dairy farmer in Fennimore, Wisconsin.

PHOTO 1: The Winch family is one of the largest breeders of Dutch Belted cattle in the Midwest.