With the holiday season at a close, it’s easy for most of us to move forward toward the New Year and lose sight of what made the last few months so special. Heart-warming feelings of generosity are soon replaced with resolutions and goals to chase. But for organizations like United Dairy Women, the New Year means new opportunities to continue giving back to those who need it most.

Farm and ranch families that grow the food we eat make up only 2 percent of the U.S. population. Even though they have an important and busy job, most of them still find time to get involved in their local communities. United Dairy Women is a prime example in eastern New Mexico. These women are dedicated to promoting agriculture and dairy, educating on the nutritional benefits of dairy foods and providing support to local charities. Since the group was founded, they have raised over $1 million for children’s homes in the Clovis-Portales area.

United Dairy Women’s focus on children’s homes in their area began when they realized many of the children were receiving little, if any, milk or dairy foods. They were shocked this was an issue in an area with such high dairy production. With shared passion, dedication and hard work, their “milk mission” was born. Since 2006, United Dairy Women has hosted fundraising events allowing them to provide children in local homes with the three daily-recommended servings of milk and dairy foods for the entire year.

For Jaimie Van Dam, United Dairy Women member and dairy farmer in Texico, New Mexico, giving back is something she instills in her own kids through these efforts.

“It goes beyond milk in their morning cereal and string cheese in their lunch box,” Van Dam says. “It means so much to provide that wholesome product we work so hard to produce. We involve our kids in the charity and hope this plants a seed in their hearts to spread love and generosity.”

The impact of United Dairy Women’s milk mission is evident at the New Mexico Baptist Children’s Home, where funding that was previously stretched to purchase dairy foods is now available in other areas. They no longer have to worry about where the next serving of milk, yogurt, sour cream, butter, cheese or ice cream will come from. The nine essential nutrients in milk are helping kids live healthier and active lifestyles. House parent Michael Speegle loves to see the children grow stronger and start playing sports like football. 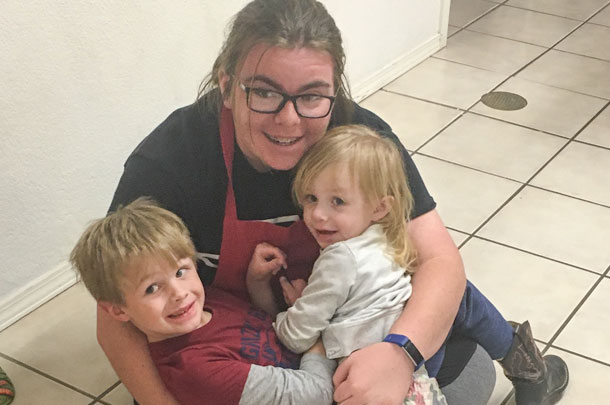 “From a house parent standpoint, it’s a game changer,” Speegle says. “It’s great to have this blessing, and I can only describe it in one word: generous.”

Originally from Alabama, Speegle and his wife had recently moved to Portales for seminary when a job at New Mexico Baptist Children’s Home opened. What started as a job he never considered having, Speegle and his wife are now house parents alongside other family members and friends who moved to pursue the same calling. Speegle didn’t have a dairy background, but quickly recognized the passion of dairy farmers in his community.

Since most dairy consumers are two to three generations removed from agriculture, it’s more important than ever for farmers to get involved with their local community. Research shows that personal connections increase trust and encourage people to purchase dairy products for their families. While dairy farmers are facing economic challenges within the industry, Van Dam says it makes their community impact even more special.

“I’ve been so moved by witnessing the generosity of people in the dairy industry when times are tough,” she says.

This article is brought to you courtesy of Dairy Max.