How long do your cows receive close-up diets?

Properly formulated transition cow rations are an integral part of transition period success. Producers and nutritionists often spend a good deal of attention to getting these diets just right and then adjusting as necessary. However, the best ration in the world does no good if animals do not receive it. When troubleshooting rations, it’s not uncommon to find that transition cows and first-calf heifers do not receive the rations as nutritionists and managers intended.

This happens for a variety of reasons. But the end result is usually less than optimal in terms of cow health and performance in the following lactation.

Prefresh rations are formulated to contain higher levels of protein, energy and minerals than far-off dry cow rations. The goal of these rations is to help cows prepare for lactation and maintain adequate body condition – without excessive weight gain – while providing essential nutrients at the proper level.

When it comes to energy, for instance, it’s important for prefresh rations to not overfeed or underfeed energy, explains Heather Dann, research scientist at the William H. Miner Agricultural Research Institute in Chazy, New York. “The optimum range is from 100 to 110 percent of a cow’s metabolizable energy requirement. The requirement is going to be affected by her environment and actual dry matter intake,” Dann notes.

Likewise, it’s essential for these rations to contain adequate metabolizable protein (MP) levels. While cows always have an MP requirement, these needs ramp up about three to four weeks prior to calving.

Not only are the cow’s needs increasing, but this is also the time frame when dry matter intake (DMI) decreases. This means many cows do not receive enough of this critical dietary component, especially those that do not receive prefresh diets for the necessary length of time.

It is also extremely important to ensure proper ration mixing and feed delivery to cows in the prefresh pens. This is one area where variation is often observed. However, if the prefresh ration is not evenly mixed, cows will exhibit variation in urine pHs and intake of MP, which leads to health problems during the transition period and beyond.

The key to success is for cows to receive properly formulated, mixed and delivered prefresh rations for an adequate period of time. While it may be a struggle for operations with limited facilities to accomplish this objective, the benefits are worth the effort. A week to 10 days spent on the prefresh diet just isn’t enough time to meet the animal’s needs. The goal should be to feed the prefresh diet for at least three weeks.

A study reported in the 2001 Journal of Dairy Science including 13,000 cows on five dairies found that feeding a transition diet for at least 21 days prepartum had a significant impact on cow health and metabolic disease incidence.

The study examined varying lengths of time in the prefresh pen and found that cows that spent three weeks on the prefresh ration had the lowest incidence of milk fever, retained placentas and uterine infections. Figure 1 shows these results. 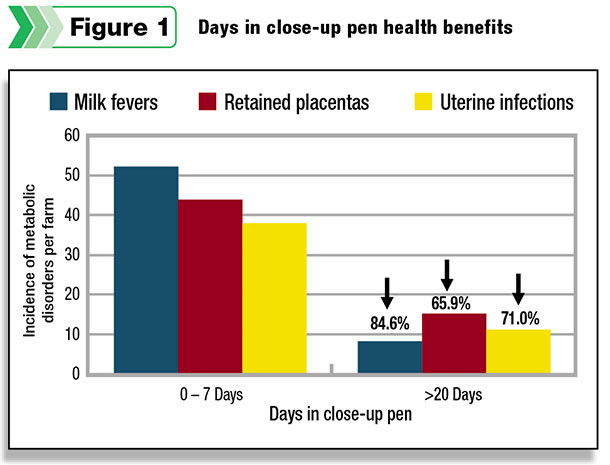 Not surprisingly, this 21-day time frame is also important when it comes to dietary cation-anion difference (DCAD), which should be -8 to -12 meq per 100 g ration dry matter. Pre-calving rations at this DCAD level have been shown repeatedly to decrease incidence of clinical and subclinical hypocalcaemia – which positively influences postpartum health and performance.

An Australian study showed that when cows received a negative DCAD diet for 20 or more days prepartum, it increased peak milk by more than 7 pounds per day. Based on 305-day predicted milk, this would translate into 1,870 additional pounds of milk.

It’s not directly understood at this point, but the theory is that the improvement is due to several reasons. These include a combination of improved nutrition and feed intake postpartum (exhibited by higher milk yield), less metabolic problems with calcium metabolism and fewer postpartum diseases associated with reducing milk and reproductive performance.

But there’s more. Additional research found similar results: Cows that spent at least 20 days on the prefresh diet increased the proportion of the herd confirmed pregnant by about 8 percent by 160 days in milk.

In the greater scheme of things, it’s easy to believe a week or so doesn’t make a big difference to a cow. However, as research continually confirms, inadequate time spent on the prefresh diet sets cows up for multiple challenges after calving.

If current facilities do not make prefresh feeding an easy task, consider taking steps to modify your nutrition plan so transition cows have access to the prefresh diet as long as possible.

If facilities do allow, but getting cows on the prefresh diet has not always been a priority, make it one. Examine your records and see how long cows really receive this ration. It should be your goal to have at least 90 percent of animals spend the desired time on the close-up diet. If that’s not the case, adjust your practices and protocols as needed.

Be sure to routinely monitor this time spent on the prefresh diet and ration variation over time to make sure your protocols stay on target and to ensure desired fresh cow performance. It will be time and effort well spent. PD