Vitamin D is typically recognized as being necessary for proper bone formation and maintaining calcium and phosphate in the body. Recent discoveries indicate that vitamin D also is required for the activation of critical innate immune defenses of cattle against microbial pathogens.

A key issue to be aware of is that when vitamin D intake is less than adequate, the vitamin D-dependent functions of the immune system may be impaired even though the animal does not have symptoms of classical vitamin D deficiency (rickets, slow growth, stiffness).

In that condition of vitamin D insufficiency, cattle may be vulnerable to infectious diseases and may not be reaching peak production. Therefore, it is critical to make sure your animals are getting enough vitamin D.

Vitamin D physiology
Vitamin D is a fat-soluble molecule derived from animal cholesterol or fungi ergosterol. Vitamin D2, which is produced in fungi, can be acquired from forages but is only a minor source for cattle. Vitamin D3 is produced in skin with exposure to UVB light from the sun. Most of the vitamin D metabolites in cattle are derived from vitamin D3.

Vitamin D itself does not contribute directly to the bone, mineral and immune-related functions in the body. It is initially converted to 25-hydroxyvitamin D (25D), and the 25D must be converted to 1,25-dihydroxyvitamin D (1,25D). Inside the cell 1,25D associates with the vitamin D receptor, a protein that binds to specific regions of DNA and regulates transcription of genes near those regions.

The genes controlled by 1,25D depend on the specific cell type and conditions of the cell. In the kidneys and intestines, 1,25D stimulates expression of several genes that encode for calcium binding and transport proteins.

Those proteins maintain the flow of calcium and phosphate into circulation. In the immune system, 1,25D triggers the expression of several genes that encode for proteins that are toxic to pathogens that enter the body.

Renal 1α-hydroxylase activity is primarily dictated by the concentrations of calcium and phosphate in the blood. Almost all of the 1,25D circulating in the blood is produced in the kidneys and serves to control blood calcium and phosphate levels. In contrast, 1α-hydroxylase activity in immune cells produce the 1,25D that triggers innate defenses of the immune system.

Vitamin D and calcium
When blood calcium levels drop at the onset of lactation in dairy cattle, parathyroid hormone (PTH) is released from the parathyroid glands to stimulate 1α-hydroxylase activity in the kidneys.

Transition cow nutrition affects the ability of 1α-hydroxylase to respond to PTH. Feeding a diet with a negative dietary cation-anion difference (DCAD) improves 1α-hydroxylase activity in response to PTH.

On the other hand, excess calcium and phosphorous prepartum suppress 1α-hydroxylase activity. Therefore, work closely with your nutritionist to formulate a prepartum diet that promotes proper vitamin D metabolism in the transition cows. 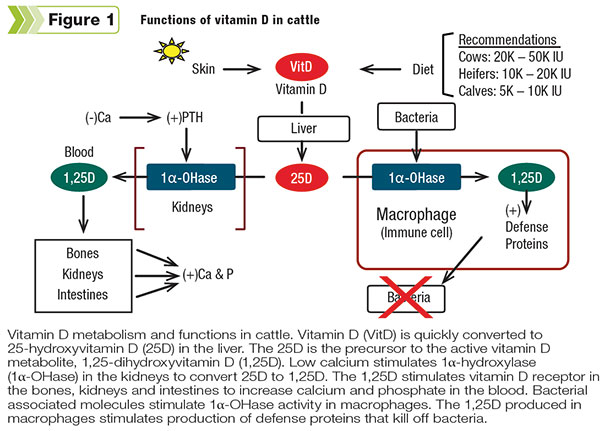 Vitamin D and immunity
Pathogen-associated molecules stimulate 1α-hydroxylase activity in macrophages. Macrophages are a population of innate immune cells that are among the first line of defense against viral and bacterial pathogens.

Antimicrobial defenses of macrophages depend on the 1α-hydroxylase activity in macrophages and the availability of 25D. If 25D is insufficient (15 to 30 ng per mL of serum), the immune system is weakened and the animal is at greater risk for infectious diseases.

The availability of 25D depends on vitamin D intake, so it is critical to make sure your cattle, particularly calves, are getting enough vitamin D.

Experiments with mastitis in dairy cattle have demonstrated the importance of the vitamin D pathway in immunity. Experimentally induced Strep. uberis mastitis stimulated 1α-hydroxylase activity in the macrophages that were in the infected mammary gland. Furthermore, intramammary administration of 25D inhibited Strep. uberis infection of the mammary gland.

Further research is still needed to determine the efficacy of intramammary 25D treatments in naturally occurring cases of mastitis, but those experiments suggest that 25D may be a useful alternative or complement to antibiotic treatments for mastitis.

Dietary requirements
The vitamin D requirements of the immune system have not been stringently evaluated, but current evidence indicates the concentration of 25D circulating in blood should be between 30 and 100 ng per mL.

Most cattle require supplemental vitamin D to maintain that range of 25D circulating in the blood. Synthesis in the skin should not be considered a reliable source of vitamin D unless cattle have unlimited access to summertime sun.

Calves need at least 2,000 IU but should get 5,000 IU per day to ensure adequacy. So far, there is no evidence to suggest that supplementing above 50,000 IU for cows or above 10,000 IU for calves improves health or performance.

Little has been done to keep track of vitamin D supplementation practices for cattle. Recently, however, John Lippolis at the USDA National Animal Disease Center in Ames, Iowa, conducted a survey of dairy herds in the Upper Midwest and found that lactating cows were getting between 30,000 and 50,000 IU of vitamin D3 per day.

The average concentration of 25D in serum samples from those herds was between 60 and 80 ng per mL. So if you supplement at a similar rate, your cows are getting plenty of vitamin D.

The vitamin D status of your calves and heifers, on the other hand, may not be adequate depending on your management practices. Commercial milk replacers have supplied calves with around 10,000 IU of vitamin D3 per day.

That rate results in serum 25D concentrations between 70 and 90 ng per mL, so the vitamin D status of your calves should be fine if you feed milk replacer. If you are feeding waste milk without a supplement, your calves are probably not getting enough vitamin D because milk alone only provides 100 to 200 IU of vitamin D3 per day.

Mineral supplements for heifers normally provide adequate vitamin D3, but if you are not providing your heifers with a regular mineral supplement, they may reach a condition of vitamin D insufficiency, particularly during winter months.

Summary
Vitamin D is critical for innate antimicrobial defenses in the immune system of cattle in addition to being necessary for controlling calcium and phosphate. More research is needed to further understand vitamin D physiology and optimize vitamin D recommendations for immunity and overall production.

Corwin Nelson is an assistant professor of physiology in the department of animal sciences at the University of Florida.