Cud chewing – both the sights and sounds of rumination – is a key monitor of dairy cow health and has been for years. A drop in rumination time signals something is impacting rumen function or animal well-being and puts producers on the alert for possible interventions.

However, watching for the physical signs of rumination is labor-intensive, and typically only a few cows can be monitored at a time.

The development of animal monitoring technology quickly increased the use of rumination monitoring beyond visually observing rumination for a few minutes a day.

Research published in the December 2009 Journal of Dairy Science found that electronic rumination monitoring results were highly correlated with those of visual observation, meaning the technology offered users an efficient means to tap into this predictive data. Now, the technology has become a powerful individual cow and total herd management tool that’s rapidly increasing in use.

As producers, their advisers and researchers find more and more ways to utilize the information generated by these monitoring systems, users can rest assured there is sound science behind the technology and the resulting management strategies. Here’s a look at some of the latest research to illustrate the reliability and scope of the technology – and its influence on dairy management decisions.

Early warning of health-related challenges is a significant benefit of rumination monitoring systems.

Data from Cornell University presented at the 2015 American Dairy Science Association Annual Meeting reinforces that predictive ability of rumination data. Results from this study show that animal monitoring systems reliably indicate an incidence of a displaced abomasum as many as three days prior to physical symptoms.

Cases of ketosis were also evident using the system. The system helped detect cases about a day-and-a-half before physical symptoms appeared. Cases of general stomach upsets were apparent about a half-day earlier than with visual observation.

Plus, the research demonstrated that the technology improves cow care regardless of a dairy’s management philosophy. Researchers note that for operations that currently perform few interventions during the transition period, animal monitoring systems help them identify cows with health disorders to improve overall transition health and performance. 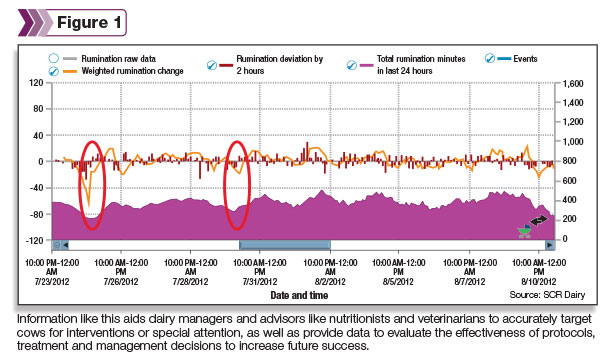 Further, the reliability of the monitoring systems enables farms that already have intensive transition programs in place to reduce their labor cost and cow handling by enabling users to successfully target those animals that require intervention.

In other words, as rumination decreases or fluctuates before calving, the risk of metabolic disorders increases.

Researchers in Germany recently evaluated when rumination time decreased in relation to estrus. The results were published in the January 2015 Journal of Dairy Science and showed that rumination time was reduced for about 30 hours around estrus.

The main drop in rumination occurred during the time period between six hours the day before estrus and 12 hours on the day of estrus. The change in rumination time for almost all evaluated feeding characteristics and rumination time around estrus indicates the potential for early detection of estrus.

Researchers in Ireland also recently explored how to use animal monitoring systems to determine the best time to inseminate cows. The results were published in the March 2015 Journal of Dairy Science.

The study set out to determine the relationship between observed estrous-related behavior, activity clusters (as detected by the animal monitoring system), endocrine profiles and ovulation time. Upon completion of the trial, the researchers determined there was a relationship between these factors.

This means that activity monitors can help producers identify the optimum time to perform A.I. before the predicted time of ovulation. This optimum time is, on average, between nine and 15 hours after the activity cluster has been triggered.

These data indicate it may be possible to achieve increased pregnancy rates in lactating cows inseminated with sex-sorted semen if cows are selectively inseminated at the correct interval after the onset of estrus.

The research also suggests that adjusting timing of A.I. in timed-A.I. protocols may allow for more use of sex-sorted semen in lactating cows.

What do these results mean?

It would be easy to get buried in the details of each of these research projects. However, the results all have one thing in common – the data verify that rumination monitoring systems offer users predictive, actionable data they can use to improve individual cow, group and herd management.

Depending on your dairy’s needs and goals, that may mean fine-tuning transition cow protocols, tweaking reproductive programs or reinforcing current practices. The point is that rumination monitoring provides you with a scientifically sound basis for improving cow care and, ultimately, your operation’s productivity and profitability. PD

Gláucio Lopes is a veterinarian graduated from Brazil and received his master’s degree in dairy cow reproduction at the University of Wisconsin – Madison. He is the large herd manager and reproduction specialist for SCR Dairy Inc.