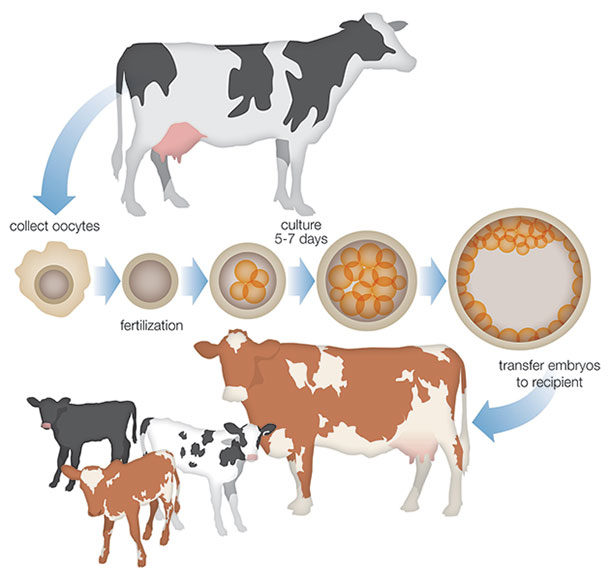 In order to remain profitable, a dairy needs to be effective at getting cows pregnant. This can be particularly challenging during the summer months because of the effects of heat stress.

It has been estimated that heat stress costs the dairy industry $1.5 billion a year in lost revenue because of reduced milk production and reproduction. During times of heat stress, reproductive rates can fall as much as 50 percent.

The increases in temperature, humidity and solar radiation during the summer months are responsible for heat stress. In order to gauge the level of heat stress an animal experiences, researchers have developed an index. The temperature humidity index (THI) is calculated using the ambient temperature and relative humidity readings. Research indicates that a lactating dairy cow begins to experience heat stress when the THI meets or exceeds 70. For example, a THI of 70 would correspond with 70ºF at 100 percent humidity.

Because of the negative correlation between heat stress and reproduction, researchers have looked at what initiates this reduction in fertility and how to overcome it.

One effect heat stress has on an animal is a reduction in fertility associated with oocyte quality. Impacts on oocyte quality can be observed for the next two to three heat cycles, which is why it takes a couple of months following heat stress for reproduction rates to rebound. The oocytes are less fertile because of the exposure to increased temperatures while they grew and reached maturity.

In an effort to overcome the effects of heat stress, researchers have examined the use of assisted reproductive technologies (ART), such as superovulation and in vitro fertilization (IVF). These technologies involve the collection of embryos or oocytes from a donor animal.

In the case of superovulation, the donor animal is administered a follicle stimulating hormone (FSH), which initiates the growth of multiple oocytes on the ovary. The oocytes then ovulate, are fertilized while in the oviduct and arrive in the uterus on day five. They can then be flushed from the uterine horns of the donor typically on day six or seven.

In the case of IVF, oocytes are removed from the follicle on the donor animal’s ovary using an ultrasound guided needle. This technique is called oocyte pickup (OPU). Upon recovery, the oocytes are fertilized and grown for seven days in a laboratory. Viable embryos from both superovulation and IVF can then be immediately (fresh) transferred to a recipient animal or cryopreserved (frozen or vitrified) for later use.

These technologies allow for the transfer of an embryo that is 7 days old. It has been found that at this point in development, the embryo is resistant to many of the effects of heat stress. Additionally, these technologies allow for the possibility of collecting embryos when there is no heat stress and preserving them for use in times of heat stress. Early research using embryo transfer indicated that embryos transferred during summer months were quite successful and resulted in pregnancies.

Additional studies using either fresh superovulated embryos or IVF-produced embryos during times of heat stress have shown increased pregnancy rates when compared with A.I. Studies comparing cryopreserved and fresh embryos with A.I. are limited but have shown a tremendous amount of promise.

Traditionally, conventional embryo flushing and IVF have been used to increase the number of offspring from genetically superior animals, and the cost associated has been too high to implement on commercial dairies. But, more recently, the IVF technology has been adapted, making embryos less expensive and more available to commercial dairymen.

The use of superovulation or IVF-produced embryos is a viable option to overcome the effects of heat stress. As with any decision, a cost-benefit analysis needs to be performed prior to the application of this technology to determine if it is right for your operation. PD

PHOTO: Embryos are transferred at 7 days old. At this point in its development, it is resistant to many of the effects of heat stress. Photo provided by J.R. Simplot Company.