Resting time is commonly accepted as an indicator of cow comfort. Observations reveal first-lactation cows rest less than adult cows during the first month of lactation. There is also a clear diurnal pattern in resting time with longer resting periods during nighttime compared to daytime.

At the dairy center of Oregon State University, Holstein cows rested on average 102.5 (plus or minus 43.1) minutes per day more than Jersey cows – independent of days in milk – both showing, therefore, a parallel resting time curve throughout the lactation.

Resting time is inversely correlated with milk production and directly correlated with gestation length. Based on readings of thousands of cows fitted with pedometers in multiple farms, Afimilk has measured 500 to 700 minutes per day as the normal resting time for lactating dairy cows.

The large range is due to the normal variation throughout the lactation of the cow, with cows resting more minutes at the beginning and end of the lactation, and fewer minutes during the peak of lactation, with some variation between farms most likely due to differences in facilities.

This initially seems to go against what we have always heard about cows needing to rest as much as possible to produce the milk their genetic potential allows. However, mulling it over, it seems logical taking into account that cows in peak lactation need to eat more to produce more milk, and cows at the beginning and end of lactation are either recently fresh (puerperium) or heavily pregnant.

But how can we then reconcile these last two statements? The answer comes in that they don’t counter to each other. Cows need to rest as much as possible (within their normal range for that production period) to be able to produce milk to their genetic potential.

It just happens that the amount of time they rest during peak milk production is less than during the time they are heavily pregnant or just recently fresh. As an example, adult humans need to sleep as much as possible during their working years to be productive. This doesn’t mean they need to sleep more than an infant.

We recognize that sick animals tend to rest differently than when they are healthy – more or less depending on the illness they are going through. For example, a cow with moderate mastitis will initially tend to rest less than normal because lying down is painful with a swollen quarter, while a cow with severe mastitis will rest more because she is systemically ill.

Similarly, lame cows will rest more while those with digestive disorders may rest more or less depending on how painful it is to lay down with an upset rumen or abomasum, and depending on how advanced the disease is. The weaker an animal gets, the more she will rest. These resting times will be deviated from the normal range for the specific production period (Figure 1). 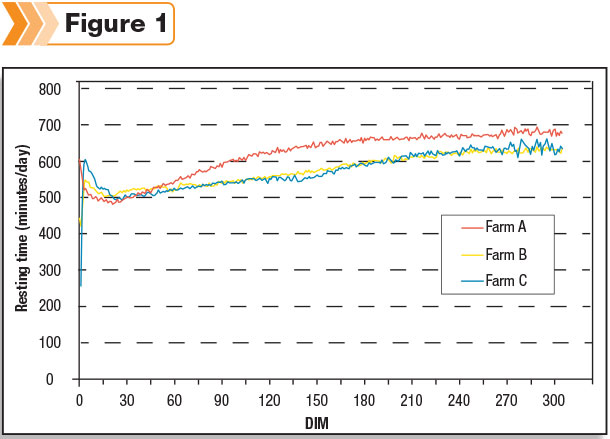 Disease effect on resting time seems to be fairly well understood or, at least, intuitive. However, it is not as clear to most what animals do in situations of heat stress. An observational study conducted at the dairy center of Oregon State University during the hottest days of 2009 showed that animals changed their daily behavior during hot days.

This study was based on daily monitoring of breeding-age heifers fitted with pedometers that act with radio-frequency identification and measure steps, resting time and resting bouts (how many times an animal gets up and down).

Two antennas placed at each of two water troughs located at opposite ends of the housing pen collected information on actual times the heifers were close to the waterers, presumably to drink. There was a clear diurnal pattern in the number of visits to the water troughs, starting around the time of feeding (9 a.m.) and ending after sundown (8 p.m.), as can be seen in Figure 2. 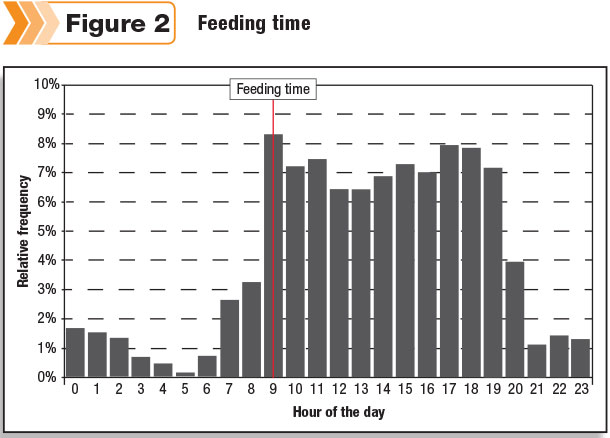 The total number of visits varied little during the days of hot weather compared to normal weather, but the timing of the visits changed from an even distribution throughout the daylight hours to a higher proportion of visits during the latter part of the day (6 to 8 p.m.) during hot days.

However, it was very interesting to notice that the heifers rested more during the first day the heat abated, which also showed in fewer visits to the water troughs (Figure 3). Total resting time decreased during the hot days to later go back to normal levels after the hot weather was over. 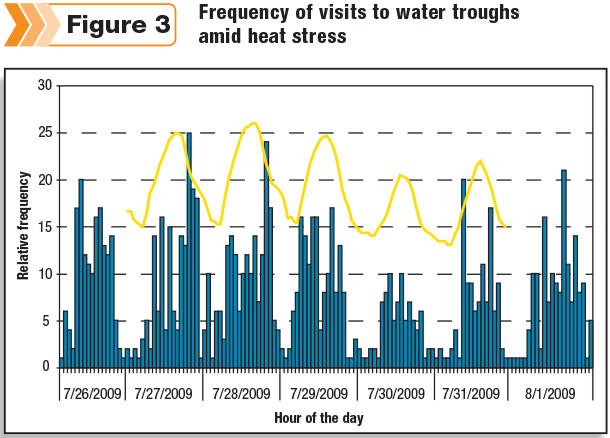 These data were obtained during the typical hot spells Oregon gets, which last about one week at a time. We expect to collect data on the long-term effect of heat stress this summer in farms in California, Texas and Arizona, where heat stress is encountered for several months in a row with little reprieve.

Results from these observations emphasize the need for adequate space for cattle to access not only drinking water but also to avoid too close of contact during heat stress. Cattle have a large fermentation vat inside them that generates a lot of heat, and this coupled with the environmental heat is likely uncomfortable when another heat-generating body is resting in the freestall next door.

We will be able to prove this theory when we compare resting time variation in grazing cattle that are allowed to choose how much space they require from the neighboring cow. PD