Forages are the foundation of all dairy cow and heifer diets. The ruminant digestive system must retain a mat of fiber from forages in order for rumen microbes to proliferate and ferment feedstuffs. However, that fiber mat must also be digested over time and be replaced by more fiber. Unfortunately, the fiber contained in forages is often the least digestible portion of a dairy cow diet.

The decreased digestibility of forages creates a conundrum for nutritionists and dairy farmers as they seek to maximize the energy available in milk cow diets while at the same time maintaining healthy rumens, feed intakes and milk components.

The definition of fiber has gone through an evolution over the years. In the early days of ruminant nutrition science and laboratory analysis, the portions of plants that were least digestible were lumped into a single term called “crude fiber.”

Eventually, a test was developed that removed the sugars, proteins and fats in forages, leaving behind the more structural and fibrous parts of the plant – cellulose, hemicellulose and lignin.

The resulting “neutral detergent fiber” (NDF) fraction of forages has become the standard for predicting the efficiency of rumination and the energy available in forages as well as a proxy for predicting feed intakes in dairy cows.

This has prompted the animal feed industry to develop analytical procedures that will predict the digestibility of NDF. In general, increased NDF digestibility (NDFd) in milk cow diets will result in higher forage intakes and greater metabolizable energy (ME) coming from forages.

More digestible fiber is less filling in the rumen, allowing greater feed intakes for dairy cows, which can result in increased milk production. High-producing herds that maximize forage feeding will benefit most from forages with high NDF digestibility.

During the latter half of the 20th century, grains and commodity byproducts were relatively inexpensive, allowing dairy nutritionists to substitute these high-protein and high-energy feedstuffs in place of a portion of the forage in dairy cow diets. Nutritionists pushed the envelope to see how much non-forage they could get a cow to consume without causing significant rumen upset.

This has been responsible, in part, for the dramatic increase in milk production per cow in past decades. However, in recent years, an improving global economy has resulted in an increased demand and higher costs for many feedstuffs. With volatile milk prices and feed prices, many dairy farmers are refocusing on forages with higher digestibility that will help decrease the cost of ME in milk cow diets.

Forage fiber digestibility is primarily a function of plant maturity. It’s well-known that the nutritional value of plants decrease as they mature. As forages such as grasses and legumes grow, the tensile strength of stems must increase to support the weight of the plant.

With advancing maturity, cellulose and other complex carbohydrates bind together for more strength, forming lignin. As maturity proceeds, the leaf-to-stem ratio declines (more stems, fewer leaves), and as a result, NDFd declines because a greater portion of the total NDF is NDF associated with stem and lignified tissue.

In U.S. dairy herds, the primary forages fed to cows and heifers are corn silage, grasses such as orchardgrass and timothy, and legumes such as alfalfa and clover. All forages have fibrous fractions that are either partially digested in the rumen or completely indigestible. Figure 1 shows the ranges of NDFd for legumes, grasses and corn silage. 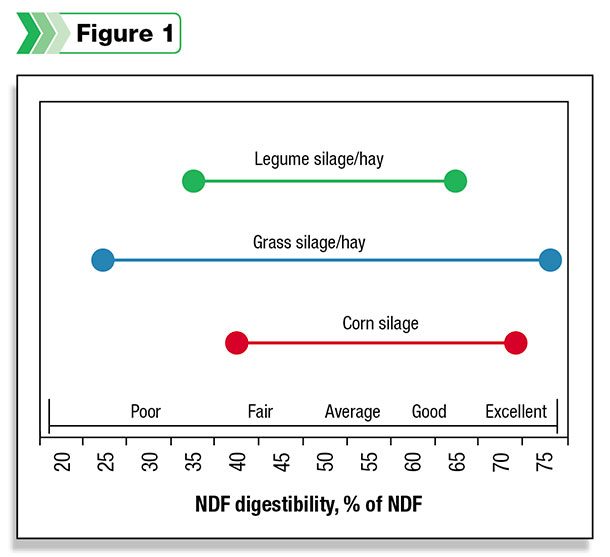 For all of these forages, NDF is never totally digestible. Grasses have the widest range of NDFd with potentially the highest NDFd. However, the NDF digestibility of grass and small-grain forages tend to drop much more quickly as the plants mature, and that’s the reason samples show up with NDFd in the very poor range for many grass forages.

All forages have the potential to have NDF digestibility in the average to good range. Because legumes like alfalfa have thicker stems, the NDFd is hard-pressed to exceed 65 percent, while grasses and corn silage can have NDFd that exceeds 70 percent.

Corn silage that’s properly harvested when grain quality is optimal will have the least variability in NDFd. Corn silage NDFd declines approximately 10 percentage units between the half milk line to advanced black-layer stages of maturity.

Harvesting at optimal stage of maturity (grasses in the boot stage, legumes in the bud stage and corn silage at half milk line) is important to maximize NDF digestibility. One study has found that one unit increase of NDFd is associated with a 0.37 pound increase in feed intake (dry matter) and a 0.51 pound increase in milk yield.

One of the most important aspects of balancing milk cow diets is making sure there’s enough “scratch fiber” or “fiber mat” in the rumen while at the same time not limiting digestion and energy metabolism by overfeeding poorly digested forages.

Undigested NDF is the functional fiber fraction that influences physical effectiveness, gut fill and digestion dynamics of forages and plays a critical role in maintaining the ruminal digesta load.

A paper presented at the 2014 Cornell Nutrition Conference described the emerging focus on undigested NDF (uNDF). The ongoing study of forage NDF digestibility and indigestibility is ultimately intended to determine the digestion characteristics of forage NDF and how it influences feed intakes and rumination.

Knowing the uNDF of a forage is necessary for a more accurate determination and nutritional modeling of the extent and rates of fiber fermentation in the rumen as well as the optimal rumen-fill to optimize fermentation. (Both the nomenclature iNDF for “indigestible NDF” and uNDF for “undigested NDF” are currently in use. The terms, for the most part, are interchangeable.)

Whereas the accurate calculation of NDFd requires theoretical laboratory testing times out to infinity (an impossibility), uNDF is more measurable in the laboratory, which then aids in a more accurate assessment of NDFd. Measuring the uNDF of forage will aid in estimating NDFd, rate of passage and feed dry matter intakes – all of which allows us to calculate energy in the diet and potential milk production.

A key take-home point from the Cornell discussion is: “The maximum dietary NDF intake is approximately 10 kg (22 pounds) per day or 1.47 percent of bodyweight (with a range from 1.27 to 1.47).” The recommendation for maintaining an optimal rumen fiber mat is to maintain dietary NDF around 9 kg (19.8 pounds) throughout the day.

This much NDF in a milk cow diet can only be accomplished by again focusing on a high NDFd for the forages being fed in the diet. Attempting to push this much NDF without a high-forage NDFd will compromise energy status in the diet.

We’ve always known forage is critically necessary for the health and productivity of dairy cows. Neutral detergent fiber in all feeds will continue to hamper and limit the energy available in dairy cow diets.

As more emphasis is being put on forage quality, continuing research on the digestive characteristics – digestibility and indigestibility – of forage fiber will enable us to do a better job of predicting feed intakes and milk production and determining the best combination of feedstuffs that will maximize productivity and profitability. PD