Reproductive efficiency is a major driver of dairy profitability. That’s because improved pregnancy rates allow producers to maximize the number of cows in the most profitable stage of their life cycle, as well as empower producers to make better culling and replacement decisions.

Furthermore, increased heat detection rate is one of the pathways to achieving a better pregnancy rate. And the best way to increase this number is to quicken the return of a non-pregnant animal to the next A.I. service.

Procedures and technologies have been developed in recent years to help producers find non-pregnant animals after A.I. as quickly as possible.

For example, as an alternative to traditional rectal palpation by day 35 after A.I., ultrasound has come to provide a more accurate and earlier detection method. A skilled technician may detect a viable embryo by day 28 after A.I. Technician skill is vital for success with this technique.

Pregnancy diagnosis has continued to evolve beyond rectal palpation and ultrasound.

Assays for detecting pregnancy-associated glycoprotein (PAG) levels in maternal circulation have been commercialized to determine pregnancy status in lactating dairy cows and heifers.

PAG tests were originally developed for blood samples, but recently the test has also become available for milk samples.

Researchers at the University of Wisconsin analyzed these PAG tests. Their objective was to understand the differences and factors associated with PAG levels in blood and milk samples of lactating Holstein cows in early pregnancy stages. They also wanted to determine the accuracy and best interval to use these tests. Dr. Paul Fricke, dairy science professor, University of Wisconsin – Madison, presented the findings at the 2015 Western Dairy Management Conference in March.

In the study, 141 lactating Holstein cows were synchronized for the first timed A.I. (TAI) using a Double Ovsynch protocol. Pregnancy diagnosis was performed 32 days after TAI for all cows using ultrasound. Forty-eight pregnant animals with one embryo remained in the study after the diagnosis was completed. Blood and milk samples were collected once a week from 25 to 102 days after TAI, and pregnancy outcomes were determined based on cut-off values determined by the PAG test manufacturer. 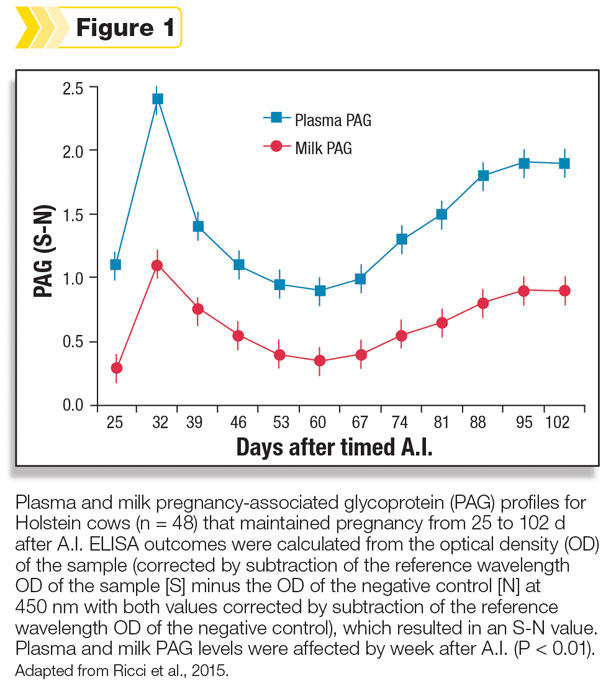 Overall, the PAG profiles in both blood and milk from 25 to 102 days after TAI for pregnant animals were similar; however, the levels of PAG in the blood samples were approximately twofold greater when compared with the milk samples, as shown in Figure 1.

To evaluate the accuracy of these tests, pregnancy outcome results in cows with unknown pregnancy status were compared to ultrasound.

Accuracy is defined as the proportion of pregnancy status outcomes, pregnant and not pregnant, that were correctly classified by the PAG test.

However, not every pregnancy results in a live birth. In this study, 13 percent of cows diagnosed as pregnant underwent pregnancy loss.

Based on this data, the use of the PAG test for reconfirmation of pregnancy has to be done with caution. The good news is that after 74 days, the likelihood of a cow to lose a pregnancy drops dramatically and the PAG level is stabilized. Given this information, the best time to conduct a first pregnancy test is around 32 days after TAI, with all pregnant cows submitted for a pregnancy recheck 74 days after A.I. or later.

“Further, several economic analyses support the use of early non-pregnancy tests for improving reproduction within a dairy herd,” he added. “Thus, the choice of whether to use the blood or the milk test to diagnose pregnancy is determined by the availability of the test and the ability to collect the samples.”

Fricke also highlighted the importance of adjusting the type of pregnancy diagnosis performed with a practical day-by-day operation in a dairy herd.

“From a practical perspective, neither the plasma nor the milk PAG tests are cow-side or on-farm tests,” he explained. “Cows must be identified and restrained to collect a blood or a milk sample, and the samples must be sent to an off-farm laboratory that can run the ELISA test. Within several days and after receiving the pregnancy outcome, cows diagnosed not pregnant must again be identified and restrained to submit them to a strategy for rapidly returning them to A.I.”

There are several factors to think about when it comes to making the best and fastest decision on what to do with a non-pregnant animal after a PAG pregnancy test.

However, based on their accuracy, milk and blood PAG tests can be incorporated into reproductive management and are definitely a viable alternative to diagnose non-pregnant animals and to perform reconfirmation of pregnancy. PD