This article was #20 in PDmag's Top 25 most-well read articles in 2010. Summary: The Dairy Research Center at Oregon State University served as the first U.S. farm to test out a new telemetric monitoring system. The system included a leg pedometer that measured steps and lying down time, two types of in-line probes that measured milk production, and a scale that weighed each cow after every milking. Because this article was so popular, we asked the Oregeon State University researchers a follow-up question:

Q. How are you using the system differently now than when the article was written? What uses or updates to the system have you found interesting?
A . One of the main effects of installing the system has been the massive reduction in hormone use (and their cost) for reproductive management, along with much better reproductive parameters. Before the pedometers we used a combination of tail-chalking and ovsynch to breed the cows. Now we only use the pedometers. We have fine-tuned the parameters to include resting time and milk drop along with activity to detect that last 5-10% of cows that don't show very high activity. One of the most interesting effects of using the pedometers for heat detection has been that most cows that were not getting pregnant now have calved again, and we have increased from 96 milking cows to our current 135 without purchasing a single animal. We had many heifers calve in this time, but the key point has been not culling as many cows for infertility.

Another great effect is being observed with sick cows. We are treating cows for ketosis according to their daily deviation in fat-protein ratio. Normally the ratio will increase from calving as the protein levels decrease from colostrum (immunoglobulins) to normal milk without much change in fat content. However, when cows have metabolic issues, the fat-protein ratio will increase quite sharply sometimes (>10% form one milking to the next). If this happens more than one milking in a row, we treat for ketosis, and it is amazing to see how the fat content in milk drops dramatically when the treatment is effective, in just one milking. So, we are using the milk components to monitor metabolic health.

The scale is now installed and running. It is very interesting to see weight gains and losses in the cows. We all know that cows lose weight after calving. According to our scale both our Holstein and Jersey cows lose on average 100 lbs in the first month after calving, about 40% of that is lost during the first week. The day after calving, our average Holstein weighs around 1450 lbs (with 40% heifers), and our average Jersey weighs around 1100 lbs (with 30% heifers).

We are currently in the middle of a research project that has been funded by the Agricultural Research Foundation and the Oregon Beef Council to evaluate the effectiveness of the milk components as indicators of subclinical metabolic problems in the cows. For this, we are analyzing blood samples from fresh cows every day for 7 days and we will look at the correlation with daily milk components, weight, and resting time. We will present preliminary results at the Oregon Dairy Farmers Association's annual meeting in March.
— Aurora Villarroel, Epidemiologist and Assistant Professor, Oregon State University 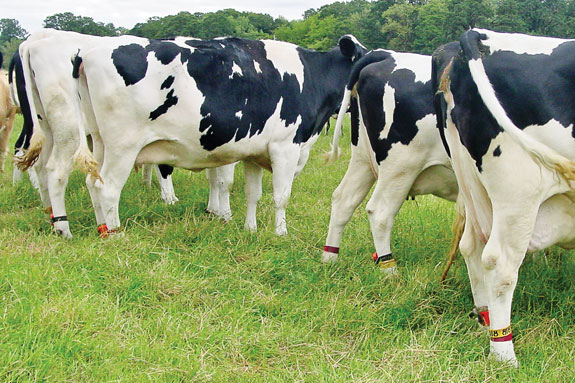 Wouldn’t it be nice to have someone monitoring the health and comfort of your cows all day long, every day? Such information would enable you to know if you needed to make changes in management before cow health spiraled downward. The Dairy Research Center at Oregon State University has found a way to do that with its recently installed telemetric monitoring system.

“It’s pretty awesome. It gives us the ability to monitor the cows at a level that we’ve never been able to do before,” says Ben Krahn, manager at the research center.

A company from Israel donated the system to the OSU Dairy Research Center. A few of these systems are used on dairies in Israel and Europe, but this is the first complete system to be used in the U.S. Dr. Aurora Villarroel, an extension veterinarian at OSU, used the system when she managed a dairy in Spain.

The system includes pedometers on every cow, two types of in-line probes to monitor milk production and a scale that weighs each cow after every milking. Each cow and heifer at the Research Center, from 12 months old and up, is outfitted with a pedometer on her leg. The pedometer measures steps and lying down time.

The pedometers are similar to RFID tags. Every time a cow enters the milking parlor or the barn, the information is sent to an antenna in the building. The antenna then transmits the information to a computer. Depending on how much the cow walks or lies down, Krahn and Villarroel can accurately detect if a cow is in heat or about to calve.

“When cows are in heat, they do walk more in general. So by measuring steps we can determine when they come in heat. If a cow is ready to calve, she is restless and she’ll get up and down. That is a signal that she is ready to calve, and we can keep an eye on her. What we’re going to be looking into is, can we evaluate if an animal is sick by looking at how long she is resting or if she rests more often?” Villarroel says.

“The biggest quirk I had to get used to was looking at a computer to breed a cow. I was using the activity data on the computer in conjunction with visual detection. We were visually detecting and breeding cows that weren’t at the right time, and the activity data was right and I was wrong,” Krahn says.

Two in-line probes have been installed inside the milk tubes of each milker. One probe tests the milk for butterfat, protein, somatic cell count and urea, while the other tests the conductivity of the milk to determine if the cow has mastitis. When cows have mastitis, they leak blood and serum into the milk, making it salty and thus more easily conducting electricity. The pedometer identifies the cow that is being tested, and all the data from the probes is assigned to that cow. These probes allow Krahn and Villarroel to test every cow at every milking. The data will be used to adjust rations and treat mastitis more quickly.

“All the research over the years has been done by collecting milk samples, blood samples or recording video at certain intervals because it is too expensive to collect milk samples of every cow, every milking for her whole life. It is just impossible. But what our probes do is exactly that. It’s a way for us to monitor data and analyze it to see if the research that has been done based on a weekly sample of milk is accurate, or if there is more information that can lead us to improve how dairy cows are taken care of,” Villarroel says.

The last part of the monitoring system is the scale that will be installed this fall. The scale will be placed just outside the exit from the milking parlor. Each cow that is milking will be weighed twice a day.

“When a cow is sick, the first thing she does is stop eating. A cow that doesn’t eat loses a lot of weight really quickly. Theoretically, the scale is able to detect weight differences in cows that are sick,” Villarroel says.

This system has made their management more efficient, especially in their breeding program, according to Villarroel. The software for the system is simple to use once it is set up. Krahn and Villarroel can both easily access the information at any time from either of their computers or iPhones.

Right now the OSU Dairy Research Center is acting as a testing site to find out how to better use the information gathered from the system to benefit a commercial dairy. They are also looking into ways to include information about the weather and environmental factors with the other data. Dairy producers who have questions can e-mail Aurora.villarroel@oregonstate.edu for more information. PD