Robotic milking startup: There doesn’t have to be a story to tell

Every producer thinking about or already purchasing a robotic milking system has heard all the stories that can go with a transition – the drama, the tall tales, the truly rough experiences. These sagas usually are the only stories that get re-told over and over, making it seem like every robotic milking startup will have an epic story to tell.

In reality, most robotic startups won’t have a story to tell. Of the 90 robotic startups I have been through in the past two years, 70 percent of the dairy producers said that their startups went better than they expected.

The hardest thing about planning for a robotic transition is: We don’t really know what’s going to happen until it happens. I cannot read the cows’ minds, and since their attitude directly impacts more than half of the startup success, it’s hard to know exactly how each specific dairy will transition.

What I do know is: Don’t assume anything. I recently returned from a week where our company was involved in two farm startups. I chose to place myself at the one I expected to be more difficult. It turned out to be one of the best first-week transitions I have seen in a while (but there are still a few more weeks to go).

So as a producer, what are the main things you need to be ready for and plan for around the startup?

1. Don’t assume anything – I said it before, but it’s worth repeating. I approach each startup with an open mind. Everything I have ever seen can be on the table, and I encourage clients to prepare and understand all of the variables and issues. Maybe only two of them will pop up, but unless we cover all of the bases, those two could create the story.

Look to other dairy producers, your dealer and technicians, consultants, industry articles and any other information at your disposal to learn about the worst-case scenarios, the most likely outcomes and the common challenges to become as prepared as possible before the robotic milking unit shows up in your yard.

2. Time commitment – Yes, in most circumstances your farm will be running 24-7 for at least two weeks, more likely three and sometimes four. There are many variables that impact transitions, so timing is always a bit of a gray area.

Look ahead at your commitments and the people involved in the transition, and then pick a startup date where everyone can dedicate as much as time as possible – just don’t plan on doing first cutting the week after you fire up.

3. Labor – This is something that needs to be planned for each specific farm and type of robot used, as it will be a little different for each one. One thing is for sure: The first three to five days of startup in any situation will require the most labor.

My general rule of thumb is 1.5 cow pushers per robot for the first four milkings for a non pre-trained herd and one cow pusher per robot on a pre-trained herd. After that, labor can be reduced each milking based on cow behavior and acceptance. Overall, it never hurts to have extra help.

If things are good, it is easy to send people away compared to finding an extra hand last-minute at 2 a.m. The best thing any producer can do is make a schedule in advance and plan out what the labor requirement will be, so everyone knows his or her job by the time the startup day arrives. 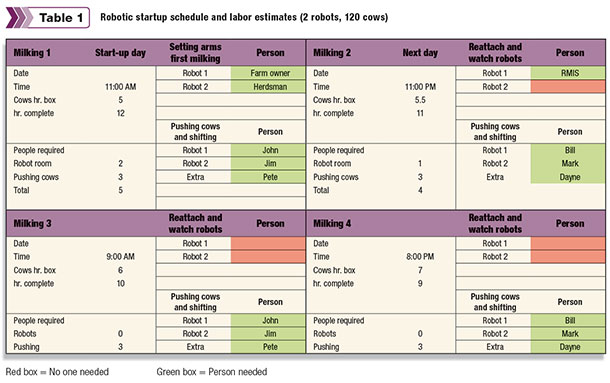 4. Communication – This is very important. As you can see, so much of the transition is being prepared with available time and enough bodies on hand so you can handle any wild cards that come your way. Many producers don’t know what to expect during startup or are unclear of who will be involved.

The installer of the equipment, the dairy producer and staff, and all other involved parties need to be clear of each others’ expectations and responsibilities around the startup.

I encourage the producer to sit down with each group and talk about roles in advance, make a schedule, assign shifts and duties, and get some backup helpers on standby. It is very important the entire startup team is on the same page so everyone can focus on the cows.

5. Cow diet – Feeding cows on robots is different than traditional TMR systems and represents more than 50 percent of the success or failure of a startup. It does not really matter what type of flow system or robot you’re working with; the cows still need to move to the robot to eat pellets or get to their TMR.

Expertise has expanded in this area over the past five years. Before, everyone was still learning and figuring things out. Today, in the field, there are many nutritionists who have experience with robots and larger feed companies that have in-house expertise, too.

Get together with the person who will be responsible for your robotic diet at least two months in advance of startup and get the game plan and transition together. Start offering the product you will feed to your cows in the robot at least a week in advance and preferably two. This does not mean mixing robot feed into your TMR.

It must be fed separately; top-dressing on top of the TMR once or twice a day is the most common method. As difficult as this can be in certain situations, remember most herds are not used to eating grains separate from forage, so any exposure to new products in advance will greatly help your cows transition the first week.

6. Will I pre-train? – Pre-training is the practice of running your cows into the robot for a set period of days before you start milking them. While they are in the robot, they receive a little bit of grain and get some exposure to the device.

We have been recommending this more over the last year and have had more and more people doing it, but it does take a time commitment and requires your barn to be finished. The largest advantage I see is calmer cows at the time of the first milking.

This is mainly because they now expect, and will eat, the available feed at the robot, reducing stress during the first milkings. Also, it helps reduce pushing cows into the robot the first few days. You basically exchange a little labor at startup for some labor in advance, but I believe it isn’t so much about the labor as it is about the transition.

Will you and your team work a little more? Yes. Will the cows learn faster if you pre-train? I believe they do in most situations. Pre-training can speed up the entire transition of cows by three to six days (if all the other details of startup go reasonably well).

7. Capacity – Every robot will have a suggested number of cows it can handle per day. Ultimately, that number is variable herd to herd based mainly on milking characteristics of the herd and machine settings.

At startup, the number of animals you chose to start with on the system can have an impact on herd performance and length of the training process. Cows need time to learn, and those learning minutes take up more of the robot’s time.

A pre-trained cow may walk into the robot without hesitation – but not always. And a cow entirely new to the robot might stop and stare for quite a few minutes before she walks in by herself for the first time.

Potentially, this translates into a few hours per day per robot where cows are learning, watching, hesitating until they feel comfortable walking in. This learning process is important, especially the availability of free time the cows should have around the robot without human interaction.

After all, milk pays the bills. I do suggest looking at the herd well in advance of startup and making choices in advance that will help reduce cows by the time startup arrives.

Some cows may be already earmarked to leave the herd; try to do that before startup and not put in replacements until after transition. Or plan the startup during a period in the year when cow numbers would naturally be lower based on pregnancy rates and calving intervals.

Fewer cows will drastically improve the startup transition period. If trimming numbers isn’t possible, go back to time commitment, labor and communication. A full-capacity startup is possible and can also be successful. Ultimately, producers need to make decisions that are best for their unique situations – and all of that means planning ahead.

Shifting from conventional milking to robotic milking is a big transition for anyone, no matter what the size of the farm. Naturally, the first few weeks are always the most difficult and stressful.

Take the time to plan, and not only think about how it affects you but how it will impact your cows as well. The cows really take a larger stress load during the transition than we do – even with our late nights and long days – and the cows should always be on the top of our minds.

Anything you can do to reduce stress on the animal during the first few weeks will always pay dividends in the long run. Even simple things like pre-planned schedules and a good startup team can reduce the cows’ stress level. Rested people tend to move cows around the barn more smoothly and quietly than somebody who has worked 16 hours straight. PD

Paul Berdell is a consultant helping dairy producers transition to robotic milking and has more than a decade of experience with robots. His company, Robotic Milking Integration Solutions, works alongside dairy producers around the world. Berdell can be reached by email .

PHOTO
Derek King rests after a 36-hour cow-pushing shift during the first few days of startup at his family’s dairy, Jer-Bel Farm. The Freemont, Ohio, dairy installed two robotic milking units in 2014 and has 123 cows.
Photo courtesy of Paul Berdell.