Maryland & Virginia Milk Producer Cooperative Association hosted their annual Young Cooperator Conference March 2-4 in Concordville, Pennsylvania. Twenty-four YCs gathered to hear about current issues in the dairy industry and build relationships with fellow young dairymen. After some icebreakers and get to know you games, the group was joined by the Maryland & Virginia field staff and management team to hear from Wawa Dairy’s marketing team.

The group toured the Wawa beverage plant where they were shown the bottling operation and unique automated picking system that Wawa utilizes. Several members of the Wawa staff joined the YCs, field staff and management for some socializing during dinner.

Wednesday kicked off with a management panel session. CEO Jay Bryant gave the YCs an update on the industry and YCs were given the opportunity to ask the management questions about the co-op and future of the industry. After a quick break, Gary Sipiorski of Vita Plus spoke about the past and future financial situation of the dairy industry.

Penn State Cooperative Extension agent Andrew Martin told the YCs about the importance of quality communication among family members that are involved in a farm business. He reminded them that everyone is different and handles conflict differently.

For dinner the YCs were joined by Chris Moore from DMI . Chris gave a presentation on the partnerships that DMI currently has with several pizza chains. He talked about Dominoes Pizza overhauling their recipe and creating the new American Legends line. The group sampled several different kinds of the American Legends pizza for dinner that evening.

“The pizzas have definitely improved,” said YC Kara Burkholder of Chambersbug, Pa. “I really like the Philly Cheesesteak.” 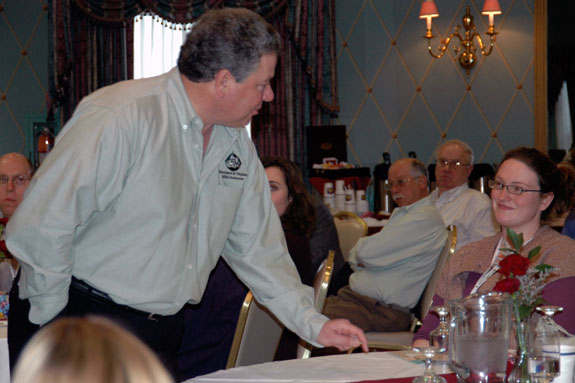 The first order of business on Thursday morning was the Awards Breakfast. Last year’s Outstanding YC Couple, Clint and Kara Burkholder from Chambersburg, Pennsylvania, were recognized for all of their hard work through the year. They recapped all of the events that they attended and spoke about the 2009 highlights.

At the end of their presentation Clint and Kara announced this year’s Outstanding YC contest runner-ups Justin Rhodes of Somerset, Virginia, and Katlin Kemp and Adam Brower of Taneytown, Maryland.

The rest of the morning was spent with a panel of dairy farmers that are active in social media. Mid-Atlantic Dairy Association ’s Lisa Perrin and SUDIA ’s Amanda Trice began with a social media update and introduced the panel. The panel included Marilyn Hershey of Cochranville, Pennsylvania; Terry Rowlett from Campbellsburg, Kentucky; Charlie Knigge of Omro, Wisconsin; Ray Prock from Denair, California; and Patty Leonard of Midland, Virginia.

The YCs enjoyed a lunch together before everyone headed home. They left with great friends, some fun goodies and an arsenal of information to take back to their farms. PD

With more than 80 patents and more than 20 inventions specifically designated to animal agriculture, we lead the way in providing advanced, comprehensive and integrated animal management systems and solutions.
GoBob Pipe & Steel
We make equipment designed and fabricated to fit individual facilities size and location.
GW Seed
Your super seed source, we have an extensive research program to develop and produce the best forage hay, silage, balage, grazing and grain hybrids.