Postpartum ketosis, or hyperketonemia, is defined as an excessive increase of ketone bodies in the blood and is a common metabolic disorder of dairy cows.

Ketosis develops when cows are in energy deficit during the first few weeks postpartum due to the rapidly increasing demands for milk production that are often not met by nutrient intake.

Ketosis is costly to the producer due to the direct costs associated with treatments, as well as the higher risk of developing subsequent diseases, such as displaced abomasum (DA) or metritis. In addition, ketotic cows are 30 percent less likely to get pregnant at first insemination.

Despite efforts to prevent ketosis from happening in the first place, it is still a common problem in early lactation cows. To diagnose hyperketonemia, ß-hydroxybutyrate (BHB – a ketone) can be easily measured cow-side using handheld meters designed for simple testing of blood.

Producers identify cows that need to be checked for ketosis using different mechanisms, such as targeting cows that are down in milk, appear depressed, have decreased rumination times, or are sampled during routine fresh cow screening programs. Once identified as being hyperketonemic, it is recommended that cows are treated to aid in the recovery from this metabolic disease. 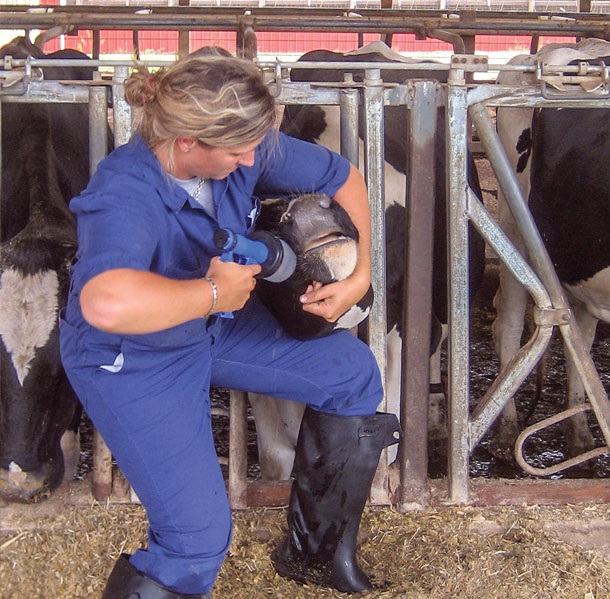 A number of different treatments are commonly used on dairy farms, including drenching with a glucose precursor, propylene glycol (PG), and direct infusion of dextrose intravenously. Research results show that treating cows with PG is beneficial for hyperketonemic cows as it decreases the risk for DA and early culling and improves milk production.

However, although commonly used in the industry, few studies are available to describe the health and production effects of intravenous dextrose, or of dextrose in combination with PG, and if such effects make this a better treatment option for cows identified with hyperketonemia.

In a controlled study of early lactation hyperketonemic cows (defined as BHB concentrations in blood of 1.2 mmol/L and greater), we compared the effects of drenching with PG alone, intravenous dextrose alone, or both in combination, to an untreated control group.

Cows (n=34) were randomly assigned to each of the four possible groups, and blood samples were collected immediately before treatment as well as 10 times during the following 72-hour period and three times per week afterwards.

Treatments were given once daily at the same time each morning for three consecutive days and consisted of 300 mL (10 oz) of PG given with a drenching gun, 500 mL of 50 percent dextrose given in the jugular vein, or both. Treatment effects on blood concentrations of BHB, glucose, insulin, and fatty acids (NEFA) were of interest.

Results of this study showed that the combined treatment with dextrose and PG lowered BHB concentrations to the greatest extent during the treatment period compared with dextrose or PG alone (Figure 1A). 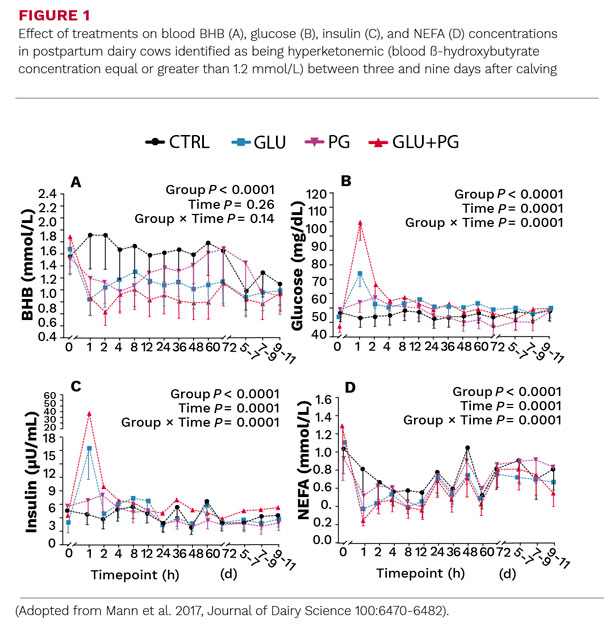 Difference in the effects of the treatments on health outcomes, intakes, and milk production could not be described due to the small sample size and short duration of the study. Follow-up studies of a larger scale are planned to compare disease and production effects for these parameters and to assess the economic cost and benefit of each treatment strategy.

PHOTO 1: Intravenous administration of dextrose is often used to treat ketotic cows. Data on the best use of dextrose treatment, in addition to propylene gycol (PG) drenching, or as a sole treatment, for fresh cows ketosis is still lacking. Results from a recent controlled study that evaluated the physiological response to such treatments suggests that blood ketone concentrations were lowered to a greater extent and duration when dextrose was given in addition to PG for a three-day treatment protocol.

PHOTO 2: Oral administration of 300 mL propylene glycol (PG) to a fresh cow using a drenching gun. The treatment with PG has been shown to decrease the time for recovery from ketosis in fresh cows, as well as reduce the risk for displaced abomasum and metritis. Use of oral PG is part of many farms ketosis prevention and treatment protocols.