Unfortunately, in a summer-long drought, early term abortion of the fetus can occur for a number of reasons. Let’s take a moment to review mycotoxins, nitrates and pesticide residuals and how drought can aggravate an already stressful breeding-feeding season.

So who hasn’t seen moldy corn, sprouting small grain heads or black, speckled cornstalk residue? Just about every crop that drowns, falls over from pest damage or is knocked down by high winds is prone to harboring some kind of viral, bacterial or mold-producing pathogen.

Throw in a summer-long drought and mycotoxins are inevitable. In fact, this is such a big issue, more than 400 experts recently met in Manitoba to talk about climatic changes that have aflatoxins, vomitoxin (DON) and zearalenone (ZEN) incidences in feed and processed grains on the increase. Remember, in 2012, aflatoxin-contaminated grain was a big deal because of drought conditions.

Mycotoxins accumulate in the animal’s body and can kill an animal in seven to 35 days if levels become too high. The deadliest toxins are aflatoxin, fumonisin, T-2 toxin, vomitoxin and zearalenone. Animals differ in their reaction to these toxins. The FDA has established guidelines according to livestock species for the maximum toxin level that can be safely fed in processed feed. That’s not quite helpful for those of us feeding as-is products.

So what can one do? Well, for starters, do not turn horses out into moldy grain stubble. They just up and die from the fumonisin toxin from a complication called leukoencephalmalcia. Horses will become disoriented or even deranged.

Others go down with colic, go blind and eventually die. As for other livestock, if you must graze forages that appear moldy or were underwater for any length of time, check out this link (All About feed - Mycotoxin test kits) or send a representative sample to your state mycotoxin testing laboratory. 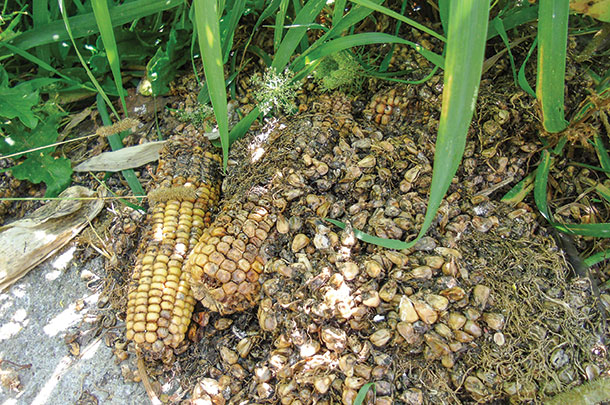 Don’t forget that ergot poisoning (aka fescue toxicity) is a cumulative exposure issue.

The weather and whether you applied fertilizer, manure or just have a high stocking density will bedevil you if your cows aborted because of high nitrates. But pesticides can also be a contributing factor.

If early term abortion has occurred and your animals graze drought-stressed forages, any of these inputs could be suspect, so ask yourself:

Did you apply ammonium or urea-based fertilizers then allow livestock to consume that forage? Normally, we’d expect the crop to utilize all of the fertilizer input and – well, grow. But lack of moisture can cause the nitrate to remain unconverted to protein in the plant stubble.

So regardless of what type of grass or broadleaf crop got the extra nitrogen, it could be excessively high in nitrates during a drought. When the pregnant cow cannot assimilate the high-nitrate forage in her rumen, a situation can occur where blood oxygen levels are depleted, thus causing the death of the fetus.

Did the cattle have access to water containing high amounts of nitrate from manure? The lack of clean water can easily be a cause of abortion issues in a herd.

Was there an excessive amount of weeds in the forage consumed? Most weeds are luxury consumers of available nutrients and often contain excessively high levels of nitrates during periods of prolonged droughts or in situations where they were allowed to grow unchecked.

Did you calculate your pesticide residual correctly? Herbicide carry-over is a real issue in droughty crops. Herbicides, once applied, begin to degrade – at least in a perfect world, with sun and rain. When the rain stops, some of these processes stop – or at least are slowed considerably. Some pesticide labels may have a warning about lack of degradation under adverse conditions like prolonged drought.

Why – you might ask? Well, according to Cornell Extension Toxicology Network, “Paraquat is highly toxic to animals by all routes of exposure and is labeled with a DANGER-POISON signal word.

A single large dose, administered orally or by injection to animals, can cause excitability and lung congestion, which in some cases leads to convulsions, incoordination and death by respiratory failure.”

While research presented at the Federation of Animal Science Societies (FASS) on feeding transgenic crops to livestock has alleviated some producers’ concerns that grazing genetically altered crop material, enhanced to be tolerant to certain herbicide chemistries or insect feeding, might alter cattle performance or interfere with reproductive efficiency, the issue of pesticide residues in milk and manure remains.

PHOTO 1: During a prolonged drought, stagnant water can contain high levels of nitrates and bacterial pathogens that can negatively impact herd health.

PHOTO 2: If you must graze moldy forages, send a representative sample to a mycotoxin testing laboratory before turnout. Photos by Melissa Bravo.