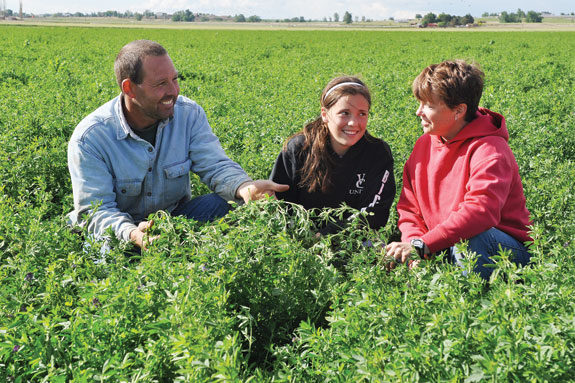 If you want it done right, ask your wife or daughter to do it

“It’s neat when you pull up to watch three swathers running and it’s your wife and two daughters driving them.

That’s a pretty cool feeling to see that happen,” says Mitch Bicandi, a row crop and hay farmer in Caldwell, Idaho. “They take a lot of pride in what they do and that’s fun for me to see.”

Family work
Bicandi, his wife, Bobbi, and their two daughters, Alli and Sami, devote most of their time to their alfalfa hay acres, which fluctuate between 450 and 700 acres.

The rest of their 1,700 acres are used for corn, beans, wheat, onions and sugar beets. While there are a lot of men working the Treasure Valley, Bicandi says his daughters do the finest job around.

“There are a lot of guys doing hay around here, but the prettiest raking job around is done by my two girls. The lines will be completely straight. When they get done, they will go out and pick up any stray hay and fork it into the rows.”

Bicandi’s family has been cutting hay in Idaho since 1917. He started running equipment as a small boy and taught his daughters to run rakes when they were 12 years old.

Now Alli is a sophomore in college and continues to cut, rake and bale hay with the family. She still takes time to fork strays into the rows.

“Hired people just won’t do that,” says Bicandi, who has four employees besides his family. “They will do a good job, but they won’t go the extra mile to do a perfect job. It’s not always going to be perfect, but the girls try really hard to make it look perfect.”

Bicandi says his daughters go the extra mile because they have a vested interest – since it’s a family business.

“There is a lot more attention to detail,” Bicandi continues. “More than if they were all just hired workers. It’s more fun, too. You can just tell them to do things and you know they will do it. They do it because it’s part theirs.”

Quality counts
With everyone in the family counting on profitable returns from their work, Bicandi looks for the best varieties and focuses on the details.

“I think the variety you choose can make a big difference,” says Bicandi.

He says not all varieties are the same. Choosing a variety that is persistent and resistant will help get your varieties to test well. A good variety is a proven variety.

“The alfalfa you buy could be bred to yield for years to come or it could leave you wishing you had gone with a proven variety. Quality starts with superior genetics and continues through proper management.”

Especially in northern states where the growing season is short, varieties that can bounce back after each cutting helps Bicandi get more cuttings each year. Since he is growing his hay for dairies, good quality and more cuttings makes a big difference.

“We watch the stage we cut it; we don’t want it to go too long or get too big,” says Bicandi, who sells all his hay to five dairies in the area. “We don’t want any bloom in it. The younger you cut it, the higher it’s going to test.”

Just counting the days is only part of the equation. Another woman must be accounted for: Mother Nature. Bicandi says weather not only dictates when he can get in the fields, but also how the crop grows, which can change the number of days between cuttings.

“Depending on the weather, the hay could be a foot tall or it could be 18 inches at 26 or 27 days,” says Bicandi, who looks to cut every 26 to 30 days. “If you’ve got really hot weather, you’re going to cut it quicker because the heat seems to speed up the growth.

The faster the hay grows, the lower the test could be. So if your hay is really growing fast and you leave it 28 days versus cutting it at 25 days, the 25-day hay will probably out-test the 28-day hay by at least 10 points. It needs to be cut pre-bud. If you have any buds on the stem, it will not test.”

Test importance
Getting the hay to test can make a big difference for Bicandi. Since he is cutting early, he loses some volume with each cutting. But he says the value of test-quality hay makes up for the tonnage.

“When we’re shooting for dairy hay, we’re only going to make between a ton to one-and-a-half tons per cutting,” Bicandi explains. “So you’re talking about getting about six tons per season.

If you were going for the feeder hay market, you could let it go to three tons per cutting and cut one less time and probably be around nine tons for the season.

This year feeder hay is around $140 to $150 per ton. Good-quality dairy hay, if you can get it to test, will be pushing $230 to $240 per ton. Usually when you take your gross dollars for the year and get all your hay to test for dairy, you will come out ahead.”

Growing hay that will make the grade when going to test is most important for Bicandi and any other hay producer with dairy clients.

There is no substitute for hard work, attention to detail and choosing the right varieties if you want quality hay. That’s the way the Bicandi family has always done it and that’s the way his daughters will continue to do it.

“My dad raised a lot of forages and fed a lot of cows,” Bicandi says. “I learned early how to work hard and get quality hay. That’s the way I learned it and that’s how I’m teaching my daughters.”

Generation after generation, the Bicandi family continues to harvest top-quality hay. For Bicandi, no one does it better than his wife and daughters.  FG

PHOTO
Mitch Bicandi, youngest daughter, Sami, and wife, Bobbi, kneel in one of their alfalfa fields right before harvest. The Bicandis grow between 450 to 700 acres of alfalfa each year. Photo courtesy of the Bicandi family.